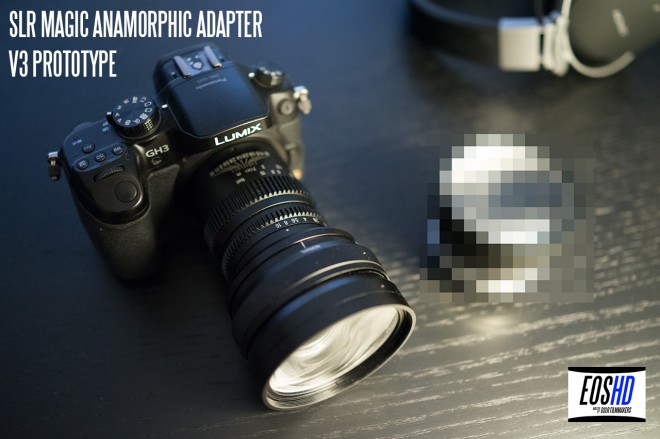 SLR Magic are taking care to tailor the look of this anamorphic to a filmmaker’s eye. Even in these early raw stages I love the image the lens produces.

There’s some of my feedback in there as well as Edwin Lee’s who shot with the V2 anamorphic in Hong Kong recently.

My footage has been shot on the Blackmagic Cinema Camera Micro 4/3 with the anamorphic in 2.5K raw.

I am editing this at the moment and will add it in part two of the article later in the week.

The frame is sharp edge to edge and you can even get a usable image at F2.0 for low light conditions. 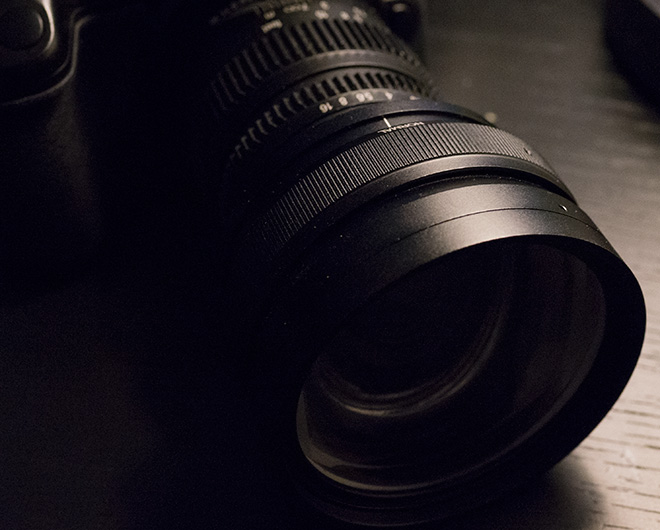 ABOVE: The anamorphic prototype V3 on the GH3

The prototype is optimised for SLR Magic’s own range of primes and for this shoot we used the SLR Magic 35mm F1.4 for Micro Four Thirds as the prime taking lens. It also works on the SLR Magic 25mm F0.95 making it the fastest aperture anamorphic on the market as it is designed in concert with the prime for optimal results.

The anamorphic isn’t restricted to just Micro Four Thirds. The anamorphic itself takes the form of an adapter like the Iscorama which attaches to the front of your prime. You can use it on any camera.

A collar is used to rotate it to the correct orientation and is about the same size as the Iscorama 36 but a lot lighter. This a huge advantage. You will not need rails or a rig to support the lens and it is great for run & gun. 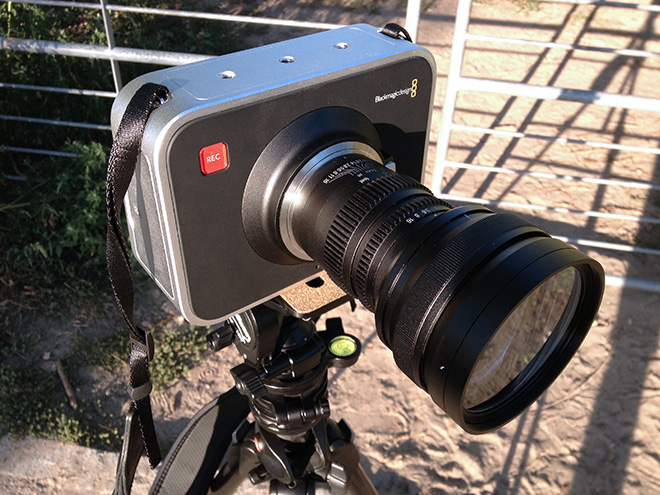 ABOVE: The prototype anamorphic V3 on the BMCC MFT body, with SLR Magic 35mm F1.4

Focus meanwhile (traditionally a weak point of older anamorphic lenses) stays on the prime lens. It does not suffer from the long focus barrel travel like the Iscorama does and it does not work by requiring two lenses to be focussed to the same mark, a headache Kowa and Sankor uses are well aware of!

Most of the old anamorphic lenses are impractical, and if you damage an Iscorama they are very expensive and difficult to replace. This new lens is thankfully not a museum piece. It is solid and metal housed. SLR Magic have taken a lot of time listening to the practical needs of filmmakers. For example instead of requiring the attachment of expensive and rare dual-layer diopters for close focus, it has a ring on the adapter to engage close focus.

The minimum focus distance has not yet been finalised and the mechanism for engaging closer focus distances may change, again they have my feedback for this. 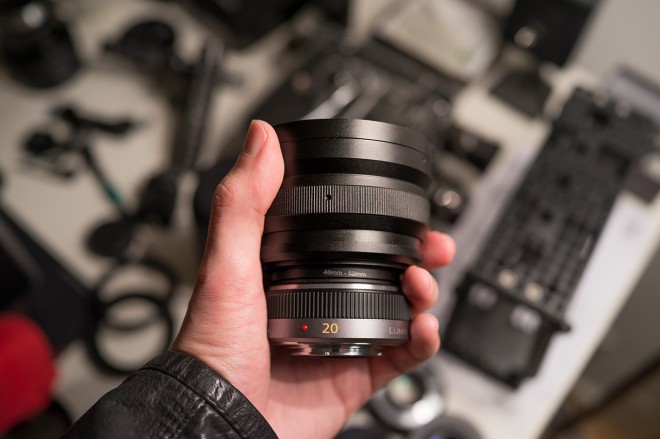 ABOVE: Size comparison with the tiny Lumix 20mm Pancake for Micro Four Thirds.

Unlike the Panasonic LA7200 which was designed for the very small chip DVX100 this anamorphic will work with a variety of prime lenses on all sensor sizes, even full frame and at fast apertures with a shallow depth of field. It has been tested successfully on the Canon EF 50mm F1.4 and 5D Mark III.

This is thanks to a large 50mm rear element which gives exceptional sharpness at the edge of the frame and zero vignetting even at 50mm on full frame or 25mm on Micro Four Thirds which for anamorphic is quite wide. 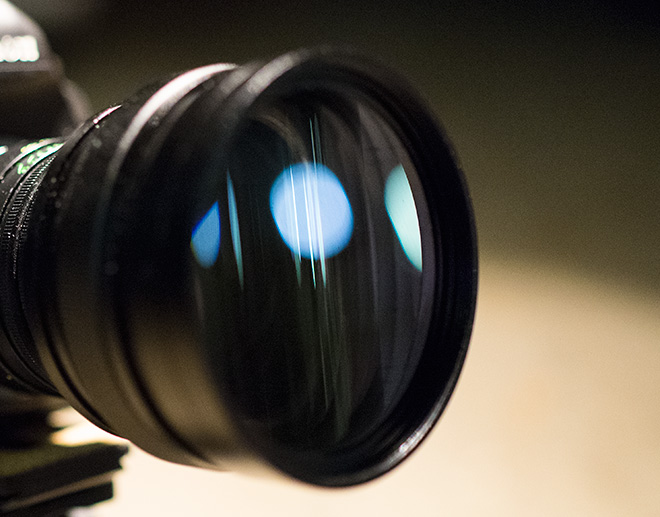 ABOVE: The SLR Magic anamorphic prototype on the 5D Mark III

The anamorphic gives industry standard 2.39:1 Cinemascope from a 16:9 sensor and the stretch factor is 1.33x. That isn’t as dramatic as the 2x stretch from 16:9 which the Hollywood Panavision and Hawk lenses give you, but great care has been taken by SLR Magic to give us the full gamut of anamorphic attributes…

Unlike the LA7200 which only works well near infinity with a deep depth of field and a slow aperture, on this lens oval bokeh like the Iscorama is present as is that uncanny look to out of focus areas. Horizontal flare is compromised of stretched LOMO-like ovals and of course the resolution gain possible by maintaining the full vertical resolution of the sensor without cropping for the narrower aspect ratio. 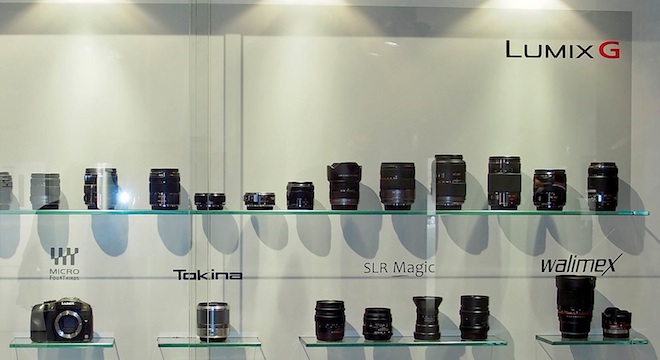 ABOVE: Panasonic display the current SLR Magic Micro 4/3 range at their IFA 2013 stand in Berlin.

J.J. Abrams style flare is an important part of the anamorphic arsenal and on the prototype flare is at the moment untamed! In broad daylight I had Star Trek flare from specular highlights on car bodywork. With the prototype I also get horizontal streak for multiple light sources in the frame but the final version will change this by coating all but one or two of the elements, reducing scattering and leaving one or two elegant streaks like we expect from a cinema anamorphic. The flare will be tamed, but not too much.

The price and release date are yet to be finalised. 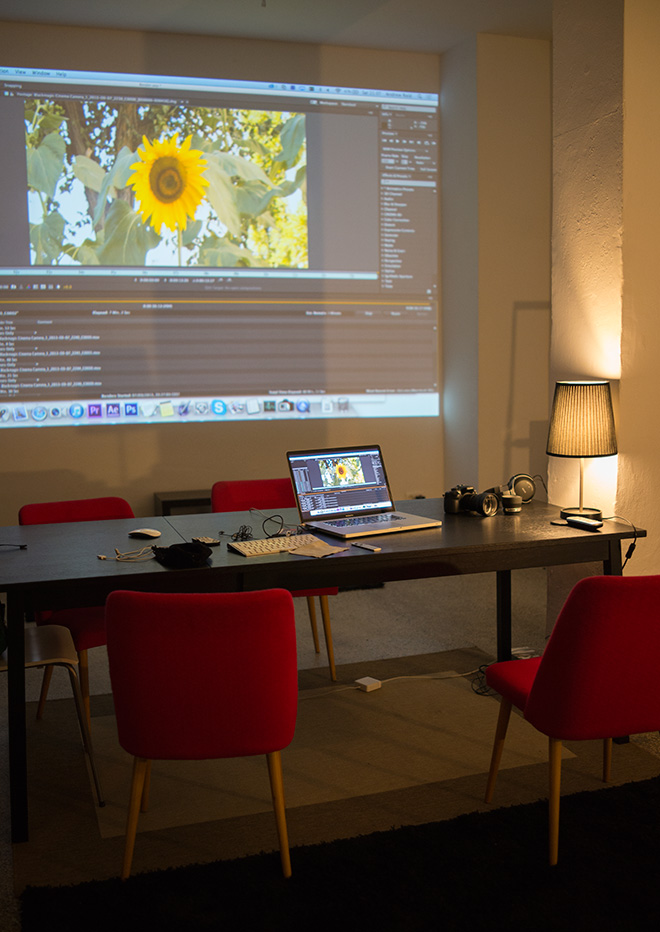 ABOVE: Editing the SLR Magic anamorphic footage at EOSHD HQ

This is a very interesting time for anamorphic shooters. The look has proved extremely popular and manufacturers are taking notice. Letus35 have one on the way which is quite different to the SLR Magic, being much larger and requiring rails – you can read about this at Dan Chung’s News Shooter and Clinton Harn’s blog here. That lens doesn’t seem to have sharp edges at this stage but I am sure they will improve this aspect. All new offerings are welcome now the supply of good quality, workable anamorphic lenses is drying up somewhat.

By now you might be wondering what the image is like from the new V3 prototype. This lens was fresh out of the factory and different to the V2 which Edwin Lee shot with a few weeks ago.

In part 2 I will talk about what it is like to shoot with and unveil the footage, so stay tuned to EOSHD at the end of the week!