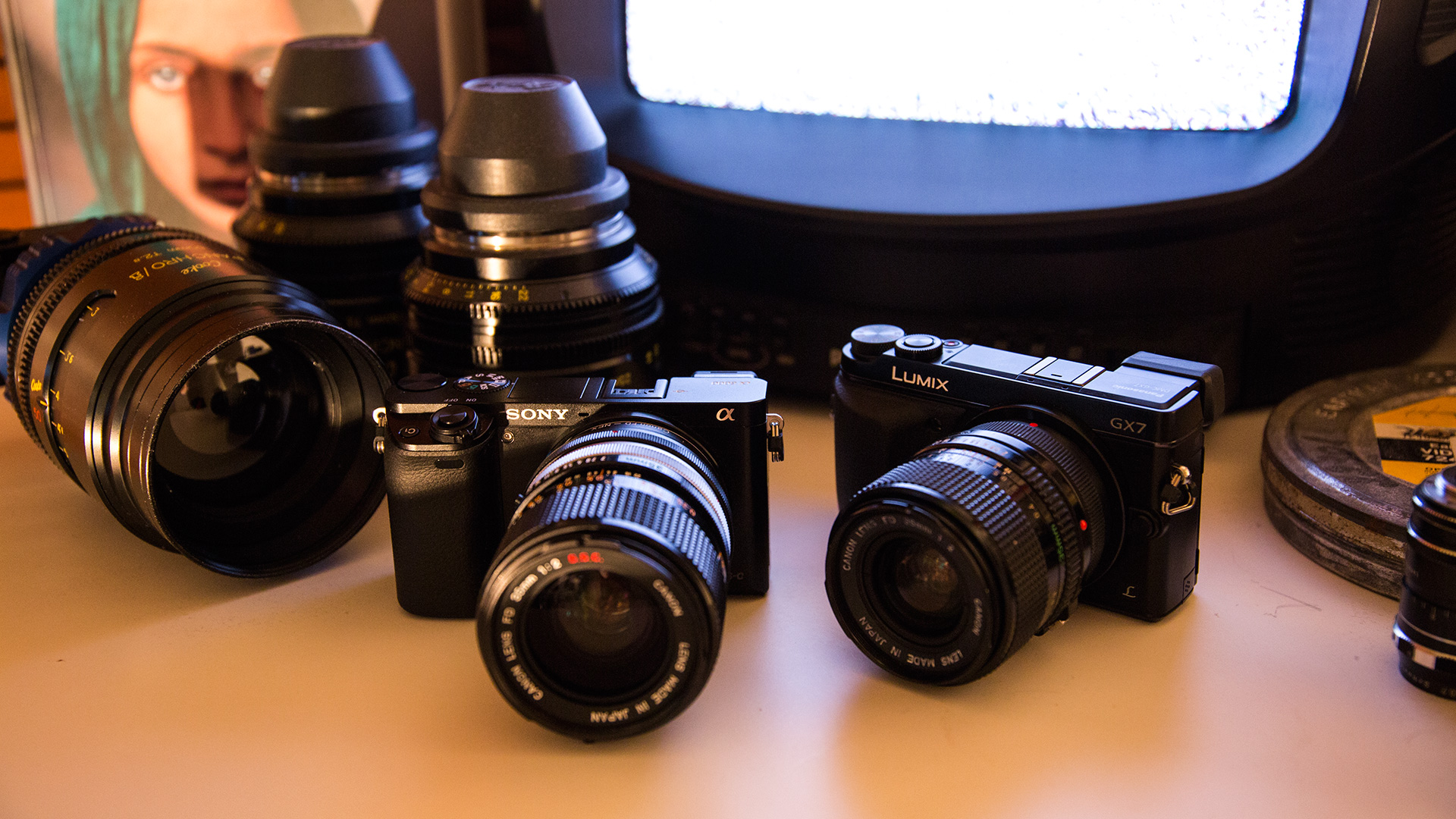 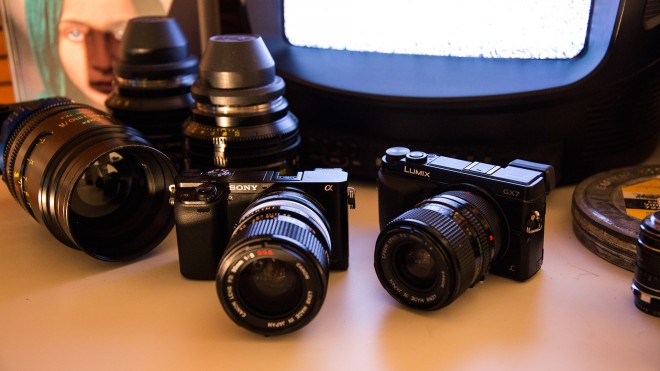 If you want a nice 1080p camera that is packed with features and doesn’t cost very much then there’s now two really good options available from Sony and Panasonic.

The A6000 is certainly Sony’s best performing mirrorless camera yet for video with an APS-C sized sensor vs the Micro Four Thirds sensor in the GX7.

I’ve been shooting with both to decide which one is most fun to use for video.

The Panasonic GX7 is a return to form for the small form factor mirrorless camera. I didn’t agree with Panasonic’s direction after the GF1 which was a great enthusiasts / photographer’s camera. What on earth were they doing with the dumbed down GF2 through 5? In terms of video the GX7 is very close to the GH4 when it comes to 1080p though it does have a much smaller EVF and of course no high bitrate recording options or 4K!

The Sony NEX 7 was a more interesting approach than the GF cameras for me and the A6000 is the successor to the NEX 7 for video, in all but the name. Gone is the NEX brand despite it being more recognised than the Alpha brand when it came to Sony’s mirrorless cameras. Strange marketing!

The NEX 7 was very handy for video and was the first affordable camera to give us 1080/60p – nice for slow-mo. The sensor though was quite noisy and video quality suffered due to rather a lot of moire and aliasing. The A6000 is a great improvement in this respect. The video quality really is a lot nicer on it and closer to the Sony FS100.

Both the GX7 and A6000 shoot 1080p in AVCHD format which I dislike with a passion I usually reserve for forum trolls! I just don’t like having to navigate 80 subfolders to get to individual clips or having to suffer Apple’s appallingly buggy support for the format in Mac OSX with Quicktime gamma shifts and all sorts. Apple’s contempt for the format is visible when you try clicking an AVCHD folder to look at the contents in Quicktime, and the folder is empty. It hangs and you get an error message saying ‘operation cannot be completed’. For whatever reason Apple just aren’t hot on AVCHD.

Thankfully I found that the 1080/60p MP4 option in the GX7 has identical quality to the AVCHD mode and the same bitrate of 28Mbit/s. These clips are stored like MOV files on the GH4 in the stills folder and you can get at them easily for editing. However 24p mode is only in AVCHD and at this frame rate there’s less compression due to a greater bitrate per frame. 28Mbit/s for 60 frames is nearly double the compression over 24Mbit/s for 24 frames. However the GX7’s codec does a superb job of avoiding any really noticeable breakup in the image. The same cannot be said for the codec in the A6000, which is a bit of an Achilles heel really. Yes the A6000 does have an MP4 mode but with a drop in quality to 1440x1080p at just 12Mbit/s. The Sony AVCHD codec breaks up more easily on the A6000 and it doesn’t grade nearly as well as the GX7’s codec – at either 24p or 60p. 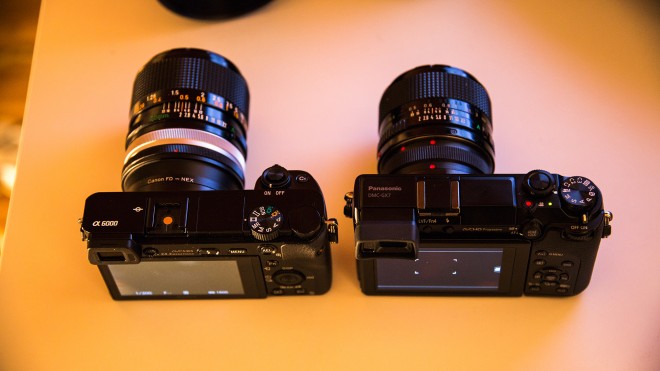 The A6000 has a lovely image for the money but compared to the GX7 it has a little bit more moire and a little bit less detail. The difference is so small you will likely not notice very often but it is there. The A6000 appears to have a similar sensor to the Nikon D5300 but very strangely Nikon have got a slightly better video image out of it than Sony have with their own sensor! Sony with all their video and codec expertise should be doing much better. Improvements are coming but they are too late for the A6000. Sony XAVC-S (just H.264 at higher bitrates and without the horrible AVCHD file format) will arrive with the RX100 III and A7S in June for 1080p recording. After that it is likely to become the standard for Sony’s consumer range I am glad Sony are finally moving away from AVCHD as their highest quality consumer codec. 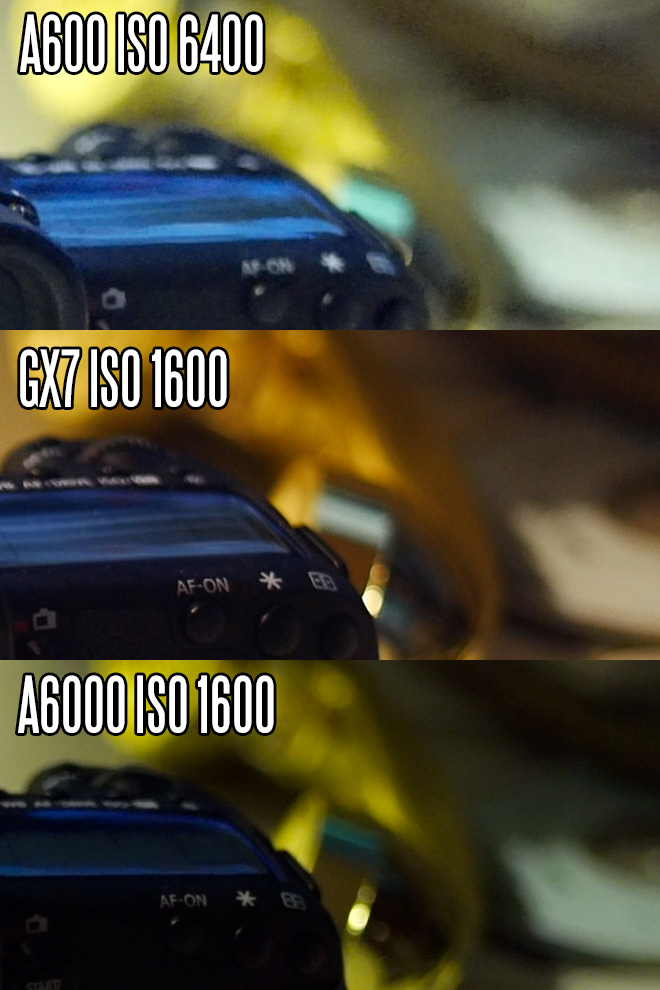 On the GX7 at ISO 1600 it almost looks like ISO 200 and of course the A600 is better but the noise is still very electronic looking.

This is really surprising and disappointing because the sensor in the A6000 does very well for high ISOs in raw stills and the Nikon D5300 with the similar sensor (if not even the same) does very good ISO 3200 in video mode.

At all ISOs on the GX7 noise is finer than on the A6000 and it is less compressed. With the crops below, bear in mind that when that blockiness crawls and moves on the actual footage with the A6000 at high ISOs it is even more noticeable.

The A6000 has an APS-C sized sensor so Super 35mm straight out of the box. To achieve this look on the GX7 you need Speed Booster or faster apertures, all else being equal. That adds expense but is worth the effort because the results are absolutely fantastic.

The A6000 also takes Speed Booster and here is where it gets VERY interesting compared to the GX7. The Speed Booster for E-mount takes the APS-C sensor nearly up to full frame size effectively and it has full support for Canon EF lenses and IS. The EF Speed Booster for Micro Four Thirds is not far off now but you can buy it right now for the Sony. If you have a lot of existing Micro Four Thirds glass then obviously this sways your decision in favour of the GX7 but if you have a lot of Canon glass and other full frame lenses then the A6000 definitely has the advantage when it comes to sensor size. You can of course fit absolutely loads of nice full frame lenses on the GX7 with or without Speed Booster but the physical sensor size is a 2x crop over full frame compared to the 1.5x crop A6000.

The EVF on the GX7 is sharper and more detailed than the A6000’s but it is smaller and there’s quite a lot of wasted space as the panel sits in quite a large eyepiece with some plastic border piece visible inside. I found the GX7’s EVF to be really usable and enjoyable but the A6000 for the price is way above average when it comes to the EVF… far more impressive than what has been available so far on mid-range mirrorless cameras. It does not suffer from a rainbow sheering effect like the GX7’s panel and the blacks are deeper. I think overall the A6000 wins it on the EVF front, though the GX7 is unique in that the EVF is articulated. I didn’t really find a whole lot of use for it when angled upwards but your needs may differ!?

The A600 has a number of problems here. Whenever you insert a card used in another camera, a computer says “NO” and begins building a database whilst your crew sits around tapping their fingers impatiently or a shot sales off into the distance. The camera also says “NO” when you try and take a still shot in movie mode using the shutter button. The shutter button’s primary function in video mode is to bring up that “NO” box on the screen. It cannot be assigned to trigger video recording and the actual video record button is positioned on the dark side of the moon. This is all very inconvenient but the menus are a mess as well. On both cameras we get 5 options on the screen at once, which isn’t many really, so there’s a lot of pages to navigate in the menus to get to what you want. 24 pages on the A6000. The Panasonic menus group options intelligently while the Sony menus scatter them into seemingly random places. For example rather than having all the movie mode related items in one section we get the codec on page 2 with flash mode and flash compensation (WHY?), ISO on page 5 with Creative Style (EH!), then some more movie options on pages 6 and 7. It is utterly bizarre! Then there is the awful playback mode which has to be toggled deep in the menus to show EITHER stills OR movies. This makes you think you’ve deleted all your movies at first because by default it is set to show only still images and when there are no stills it says the card is empty!! When you do find the movie clips they are given the world’s worst thumbnail quality previews in the world. You can barely make out what the clip even is!

Clearly when Sony bought Konica Minolta they did not get any camera software engineers in with the bargain, so this team came from where – the Playstation group? The Alpha camera menus are a step forward from the NEX ones but they still have problems that are obvious to the user but seemingly not to Sony’s own people.

The GX7 on the other hand is a breeze to use, both in terms of the physical controls and the logical menus. You have twin top dials on both cameras but on the A6000 one of these is a mode dial. The GX7 has a third dial for this, separate to the dials for aperture and shutter speed. Although the A6000 loses the tri-navi dials of the NEX 7 it does at least add a dedicated movie mode to the mode dial. On the old camera if you were shooting stills in 3:2 then composition would only snap to 16:9 after recording begins. Something tells me that is bit late for composition! Sony’s new Alpha control layouts and menus work best on the RX1 for stills. I don’t really enjoy them for video. A lot of improvement needed here. 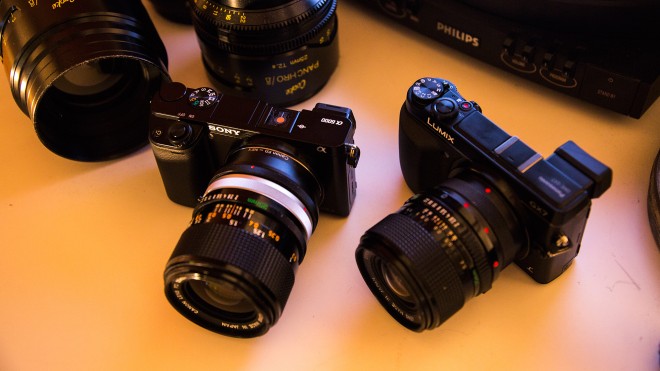 All in all I wanted to like the A6000 a lot. The price is very appealing, the EVF is very nice for such a small camera, the sensor is large and Sony have packed in the features for video users this time. Focus peaking, zebra, uncompressed HDMI, PAL / NTSC selectable and less moire than their previous models.

However I just found the image on the GX7 better for video. It has a crispness and realism to it with a higher level of fine detail. The killer blow for the A6000 though is that the GX7 has a MUCH better codec and the MP4 mode for 50p/60p holds up superbly in post. Sure you can shoot some nice results with the A6000 but the codec is over-compressed looking on way too many occasions for my liking.

The GX7 isn’t perfect either but it uses a similar if not the same sensor as the GH4 so 1080p quality is very similar. 4K a different matter but if you just want a decent 1080p image the GX7 is fantastic value for money.

The A6000 ranks below the D5300 and GX7 on overall video quality but it remains quite a bargain for the price given the overall feature set and spec. The larger sensor and ability to go full frame with Speed Booster is the biggest reason to choose it over the D5300 or GX7. The EVF and compatibility via the Metabones adapters with Canon lenses are two more compelling reasons.