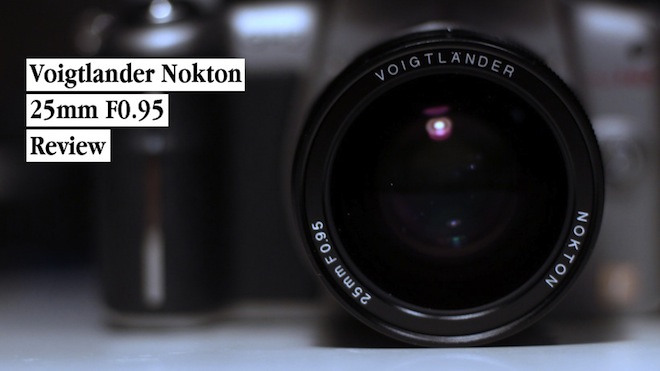 Push to ISO 1600 and you can shoot some architecture in a city in the dead of night and notice to your surprise that stars are visible.

The added bonus is that your GH2 starts looking like a 5D Mark II in terms of shallow depth of field, so the wide aperture is even of benefit in daylight, although you will need an ND filter since 1/4000 would be overexposed. 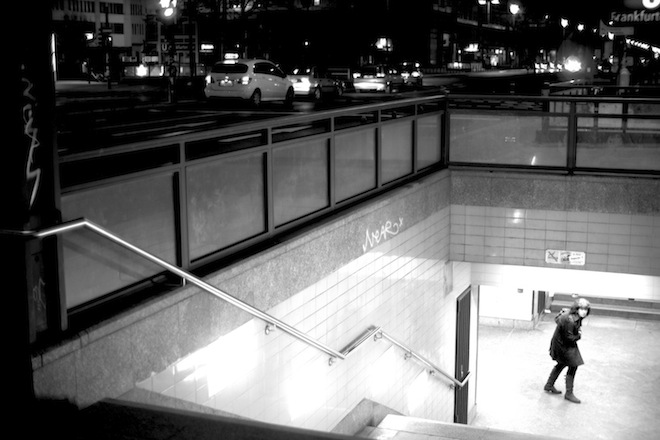 The lens does have some caveats. Corner sharpness falls off right at the edges quite startlingly and doesn’t improve until you close right down to F5.6. Also purple fringing is pretty severe at F0.95 and doesn’t disappear until F2. It’s worse than my Zeiss 85mm F1.4 in those respects, for sure and if you need sharp corners then the Leica 25mm F1.4 for Four Thirds might be a better option – in fact that has a better overall image at F1.4 but the reason you buy the Nokton is for F0.95 – that’s the party trick here.

The lens is actually pretty sharp wide open considering just how wide open you are shooting. Build quality is top notch and the focussing buttery and easy to hit the right spot with – yes it is like harpooning a fly – but with a very precise harpoon at that. Rarely have I resorted to focus assist, I seem to nail it on the GH2’s live view without many hiccups. I like the way the lens feels, however the lack of electronic contacts is a bit of an oversight – no aperture is fed into EXIF data, the GH2’s ability to remove purple fringing in firmware is ignored, and for stills the rotation of portrait shots is not automatic like it is with Lumix Micro Four Thirds lenses.

The focus ring is not perfectly round on it’s surface, it has smooth sloping indents between the grippy parts. Not ideal for follow focus gears. 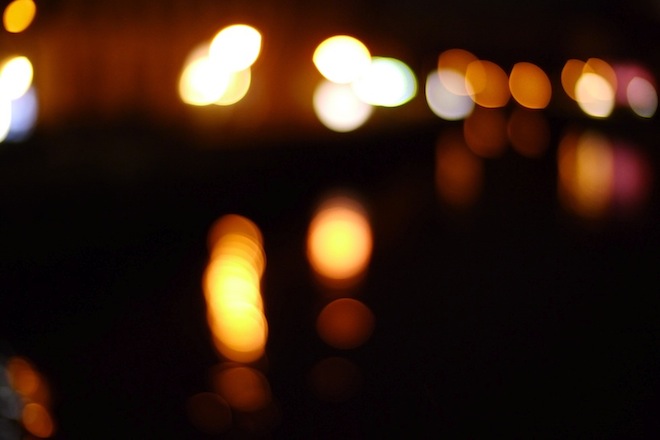 Bokeh is very odd but it has character. Mostly bokeh is rain drop shaped or rugby ball style, with half crescent shapes toward the edges of the frame. Very rarely do you get round bokeh with the Nokton!

Halos around bright lights and flare is not handled very attractively though, though that’s more to do with the GH2’s sensor.

I am not one to check off a list of technical points to judge whether a lens is good or not – does the Nokton produce nice images? Hell yes.

It’s tempting to use the F0.95 aperture a bit like a scatter gun though – it leads you down some paths that are so dark you trip over – metaphorically as well as actually. What F0.95 gives me which I like most is not that it’s capable of turning every dimly lit situation into broad daylight – no, although that is amazing, what I really like about the Nokton is it’s character, it’s shallow depth of field, and the fact that you can avoid high ISOs for normal nighttime shooting where previously with an F1.4 stopped down to F2 for sharpness you’d be pushing ISO 3200, with the Nokton on F0.95 you rarely need to push up past ISO 400 – and that is a huge benefit to image quality on Micro Four Thirds.

The Nokton is slightly overhyped at the moment, but it is a beautiful lens. If you can’t get hold of one I recommend the Leica 25mm F1.4 for Four Thirds and the Panasonic adapter to M43rd’s because that is the sharpest lens wide open I’ve ever used, and it is almost perfect in every way that a lens can be measured. 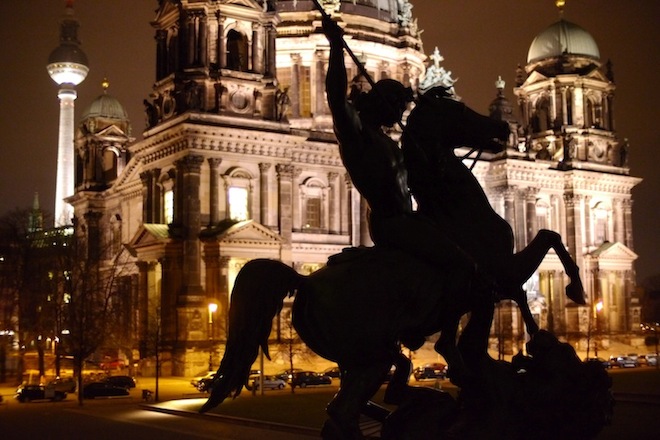 The Nokton is a unique lens because of it’s brightness, and you cannot get more shallow depth of field at 25mm on Micro Four Thirds than is on offer here.

Those who like the 5D’s aesthetic will feel much more at home on the GH2 if they also have the Voigtlander.

You also find yourself with the magical ability to shoot stills at high shutter speeds in very low natural light – something which I have never done before. Capturing action at 1/200 at night time is a pretty special ability for the street photographer, and in most cases you still don’t need to push ISO that far.

Just for laughs I tried the Nokton at F0.95 and ISO 128,000 on the GH2 recently and it really was a glimpse of the future. Trust me low light performance is going to fade from our priorities once nighttime looks like daylight – it looks ridiculous! It’s like walking around with night vision goggles, everything looks a bit monochromatic and flat.

If you’re on a budget and can find a Computar 25mm F1.3 on eBay snap one up as it’s a superb little lens for such a low price but it gets soft way before the corners arrive. In the centre however, even at F1.3 it is pretty sharp. 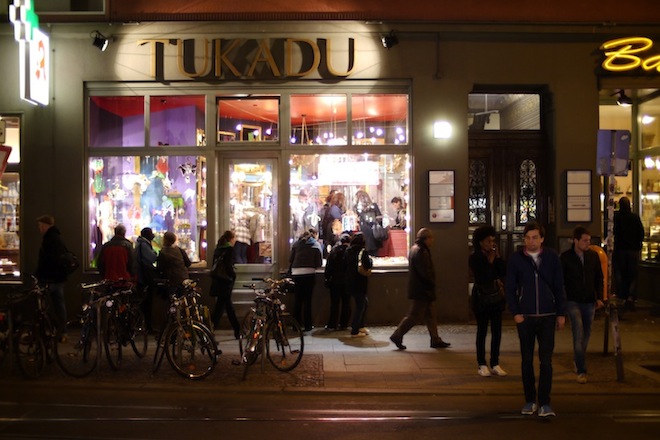 If you look at the price of the original ‘Nokton’, the Leica Noctilux-M F0.95 for full frame rangefinders, this is 1/10th of the price. It is certainly better than 1/10th as good. In it’s price range the Nokton is massively better than the Senko 50mm F0.95 industrial c-mount marketed as a ‘Noktor’ – which ended up vaporising, and it is cheaper and better than even the vintage c-mount F0.95 lenses. That it’s 25mm helps too. I’d like to compare it to the legendary Kern Switar 26mm F1.1 and Canon 50mm F0.95 ‘dream lens’ which currently goes for £1000+, but I dare say it comes close to both of these.

All in all this is currently THE best investment you can make in the Micro Four Thirds system and it will be in your possession long after the GH2 has been consigned to history. It is the best all-round lens you can buy for Micro Four Thirds and it is unique. 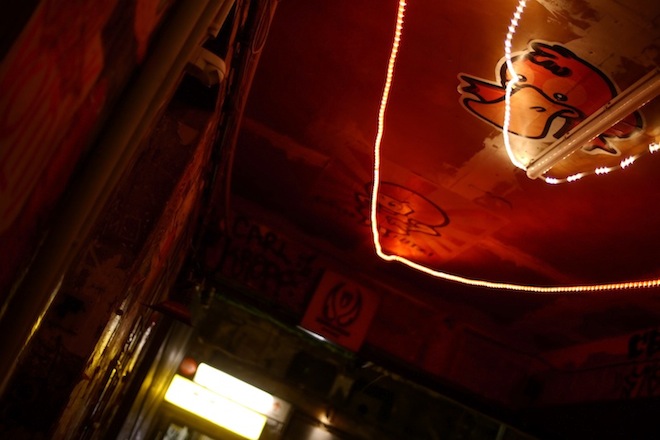 Some camera / lens combinations are unique, sometimes you need to have both to achieve that look. If a beautiful fast wide 24mm F1.4L is a good enough reason to buy a 5D Mark II, then the Voigtlander 25mm F0.95 is that ‘special’ lens for none-Micro Four Thirds owners to make the jump. With it’s retail price of $1000 / £699 and considering how cheaply you can pick up a Micro Four Thirds compact system camera, it should be a no brainer if you can spare the cash. I am budget conscious and to me, actually, £699 is a lot of money to spend on one lens. But you must get all thoughts like that out of your head.

The Voigtlander 25mm F0.95 is not ‘just’ a lens. It is a device capable of transforming your Micro Four Thirds camera and the way you shoot with it.