Magic Lantern’s raw recording module for the 7D is a perfect illustration of why colour depth and dynamic range are more important than resolution.

It’s also a huge step up for Canon APS-C video shooters and free.

Raw gives you rich 14bit colour, how does this affect the image?

Usually low contrast areas of the image and inky black shadows in low light would be the most compressed part of the image. The dynamic range would be clipped, and shades which are actually thousands of very subtle transitions would be rendered as one stripy block with perhaps 4 or 5 transitions. You can see in the video above that the shading and rendering of the 7D’s output has improved leaps and bounds with raw. All that colour data and tonality comes flooding back. Skies are no longer full of banding and macro blocking. Shadows look like shadows, not mud. In the standard video mode noise in the shadows win, reducing what little is left to a crumpled heap of mushy brown. In raw video on the 7D, the noise is a distinct and separate layer on top of rich tones and details, and when you apply noise reduction in post, the image isn’t destroyed along with the noise.

(Note these images are for illustration on the blog only, converted to 8bit JPEG for the web – so they don’t look as good as the original raw files)

With the standard 7D video mode, colour looks flat and washed out, detail looks mushy. Sharpness improves with raw, and blue water is brilliant blue, grass is rich green. It really is like looking out of a window. When you adjust colour in post, even on a much smaller and easier to handle ProRes file converted from the raw file, the grading experience is totally different. The image responds beautifully and you can take it much closer to what your minds-eye and imagination expects from it.

I can never go back to an 8bit compressed H.264 based codec, especially not an implementation as bad as we find on most current DSLRs.

For me, the standard DSLR video mode is finished. The end.

To stay viable in the enthusiast market (and for filmmakers) alongside affordable cameras that shoot raw video, Panasonic, Canon, Sony and Nikon must step up their image quality so that more of the sensor data ends up on the card. DSLRs need dedicated video chipsets and ProRes. Video quality needs to be given the same serious thought that stills are given, it can no longer win hearts and minds as simply a point & shoot bolt on even in high end models. 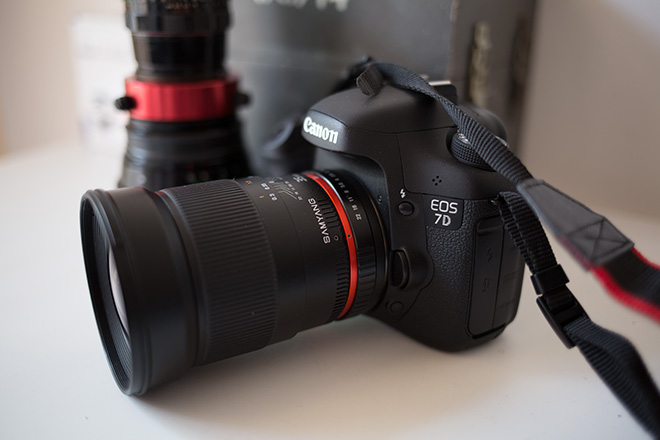 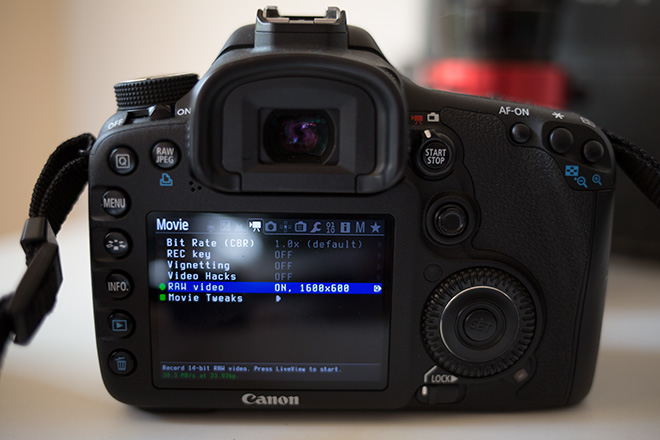 Image quality in raw is similar to the 50D but the 7D has a number of advantages.

One is that Mosaic Engineering make an anti-aliasing filter for the 7D (although they say one is also in development for the 50D). This should all but cure the moire and aliasing issues.

I prefer it to the 50D as it’s a better stills camera and uses the same high capacity batteries as the 5D Mark II & III. Used I paid 650 euros for my 7D body including a battery grip and my 50D cost 400 euros for the body only. Unfortunately, new the 7D is still over 1000 euros.

You also gain a dedicated video record button and the newer 18MP sensor which still stands up well today for stills – despite being recycled more times than a plastic bottle. The 7D is better for raw video than the Rebels with the same sensor as it has a fast Compact Flash card slot and a larger buffer.

According to early benchmarks the compact flash card slot in the 7D is rated for 90Mb/s in playback mode. Theoretically if it goes close (around 80MB/s) in movie-mode, continuous 24p recording at the 7D’s native capture resolution of 1728 x 1156 will be possible. Though the horizontal resolution isn’t quite at the 1920 mark and the aspect ratio at full vertical resolution is 3:2, an anamorphic lens fixes all that.

Because the 7D has a parallel processing architecture, it is lagging behind a bit compared to the other cameras in terms of Magic Lantern development, but it has certainly caught up leaps and bounds in the last few months. The full processing power of the dual-CPUs likely hasn’t yet been fully exploited. Raw video on the 50D (and certainly 5D Mark III) is at a more mature stage of development.

At this stage the 7D isn’t ready for prime time and nor can we expect it to be yet. This whole thing is an experiment at present.

The early Alpha builds of raw_rec for the 7D has a bug preventing higher resolutions than 600 pixels vertically being continuously recorded, instead you must drop to a narrow aspect ratio (2.67:1), recording at 1600 x 600. Live view freezes when you hit record making it impossible to monitor the shot on the LCD whilst recording. The same output via HDMI also freezes. It returns to life if you press menu or playback after ending the recording allowing you to set the next shot up. I assigned playback within easy reach on the SET key. Obviously, these things are targets for improvement once development progresses further. 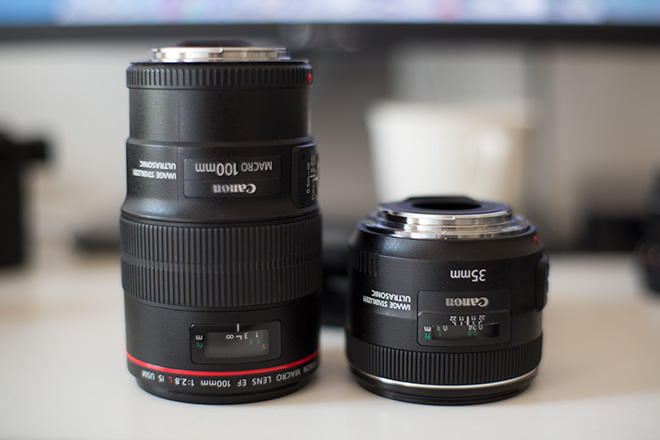 The footage above was shot entirely handheld, using the Canon 100mm F2.8L and Canon 35mm F2.0 IS. These use Canon’s latest generation ultrasonic image stabiliser. The 35mm F2.0 IS is amazingly sharp wide open, as sharp as the new Sigma 35mm F1.4 DG at the same aperture. The Canon 100mm F2.8L is a macro lens first and foremost, how does it do for general purpose shooting? Unfortunately Canon chose not to optimise the manual focus ring for general purpose use. This is a REALLY big flaw on this lens and a major reason not to buy it unless you really need it for macro work. It has a tiny 8mm travel between 1m and infinity on the focus ring, with almost the entire 180 degrees of turn used for the macro focus range of 1m to 0.3m. Why not utilise at least part of the other 180 degrees for 1m to infinity?

The other drawback I found when shooting this video is that the 7D’s screen isn’t as visible in daylight as the 5D Mark III’s, but at least the 7D has a full 1080p HDMI output for monitoring and this should work fine with raw recording once they fix the live-view feed.

If you have an EFS lens that is indispensable such as the Sigma 18-35mm F1.8, or if your budget doesn’t stretch to the 5D Mark II or 5D Mark III then the 7D could be a great choice for raw video once Magic Lantern develops the capability further. Just be sure to factor in the VAF-7D anti-aliasing filter from Mosaic Engineering as it’s essential on this camera.