At EOSHD my thoughts are currently with the Japanese people. Please donate to the Red Cross in Japan via Google.

I’ve now had my OmniSlider for a good deal of time and it’s pretty unique. In terms of what it can do in timelapse mode, motion control, stop motion and HDR it takes some beating. This is what the OmniGear is all about and the results can be stunning.

However the main reason I have one is for video mode use, and live tracking shots.

I tend to avoid the genres that the OmniSlider is so suited to… preferring to concentrate on real-time video. So bare in mind my view is from that perspective.

The example shots above are all in real-time as the trolly moves across the dolly. That sentence has a nice ring to it – unfortunately so does the motor, which is clearly audible. So it’s not suitable for narrative drama where live audio is being picked up close to the camera. For music videos it’s perfect, but still something gives me the feeling future products are going to be better. The motor in my OmniSlider causes oscillations when travelling along the rails at certain speeds. In fact, at around half of the speed scale you get oscillations which turn the image to jelly because of the rolling shutter of CMOS sensors. Faster oscillations and vibrations cause jitter on hard edges. There are several work-arounds – settle the joystick on a speed which causes less vibration by testing different rates on location as you work (there’s no hard and fast rule for that though), and use as wide a lens as possible.

Technique-wise, the slider (like all 1m length sliders) works best when the subject is close to the camera especially if you’re forced into using a wide lens. If you focus at a distant plain, you won’t notice anything moving at all. Objects close by pass from one end of the frame to the other. You get what I mean – thinking about perspective is important when using a slider. 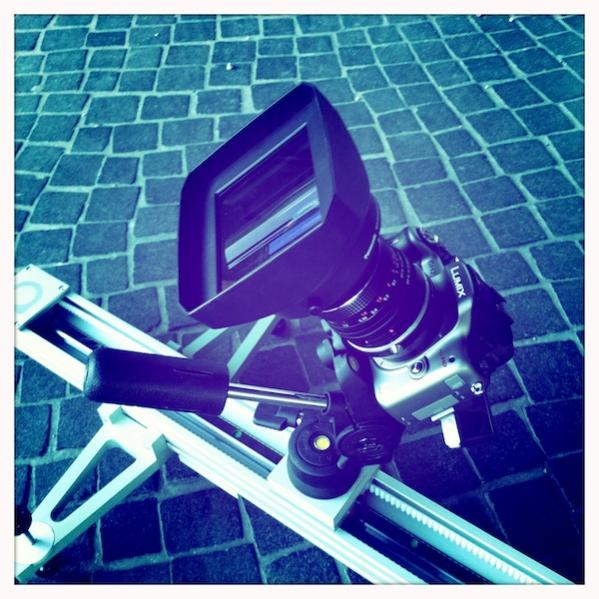 Due to the vibration issues I don’t recommend a lens longer than 35mm. For my footage I didn’t want to go ultra-wide, so I used a 35mm lens and a 1.33x anamorphic (the Panasonic LA7200) for a wider field of view, making the aspect ratio roughly 2.35:1 and giving me beautiful flare. The oscillations get less noticeable the wider the field of view. With the 35mm and anamorphic though I had to bin some shots.

The slider is extremely heavy. I feel this is a big area for improvement. It is however made up for somewhat in terms of durability, but lugging this around a large set or an urban location is a definite no-no unless you have a crew to carry your equipment around – most EOSHD readers, I’m guessing, don’t, and incidentally neither do photo-journalists like Dan Chung who recently shot with a slider to bring back powerful video footage of the terrible events in Japan. If you need a ‘pocket dolly’ style portable slider then there are smaller, lighter and cheaper non-motorised options out there. You can’t do timelapse or HDR stuff on them, but for video they’re a better option. The motor in the OmniSlider is very heavy-duty, and power is provided by a lead acid battery, again – power and durability but at huge cost to portability.

I have some feet with my OmniSlider, which are necessary for levelling the slider on uneven ground. Whilst the slider is generally well designed, the feet are a complete nightmare. You can’t just take them off, since the weight of the camera will tip the track if it’s not completely steady and flush against the ground it’s standing on. So the pair of steel plates with adjustable feet are necessary. The feet are round knobs which turn, a threaded bolt causing them to screw up or down. That makes large adjustments time-consuming but fine tuning is pretty good. The feet are not as easy to attach and unattached as they should be – requiring the use of an allen key – and one with an indent that allows it to be rotated at an angle at that. I’d prefer thumbscrews or latches – so much easier. I don’t want to have to unscrew 8 fiddly grub screws with an allen key every time I unload or repack the slider. Also the number of turns to tighten each screw is achingly large. A latch is one click and you’re done! It should be click-click, and both feet secured in a matter of seconds.

The shooting tasks best suited to the OmniSlider are illustrated with gusto by DitoGear themselves, namely Chapel – the breakout HDR timelapse video shot with the OmniSlider and a 5D Mark II. It’s a professional piece of gear, it’s heavy, it suits a larger crew. The company themselves nailed it perfectly and you can see what amazing results this thing is capable of.

The controls are easy to use, with well thought out menus. Although one does have to calibrate the trolly via the handset each time you turn on the unit unless you remember to shift it by hand to the start of the track every time you turn it off. This could do with a refinement to make this shift happen automatically, or for the remote to remember the position of the trolly and automatically calibrate itself so it knows where the track ends and where it begins.

I feel the OmniSlider is somewhat of an embryonic product, that is well built with an extremely high-end feature-set, but not as refined as it will be in the future when DitoGear improve the crank and motor systems. To their credit, they are listening and acting, plus they’re an extremely hard working group who really do care about DSLR video. Even before the OmniSlider evolves further I can fully recommend it for HDR and spectacular timelapses but it is simply too loud for film sets and not vibration proof enough to fully recommend for operation in video mode. If you are a lone shooter or artist, or a small crew who cover large distances on foot, this slider is not meant for you, it’s simply not portable enough.

It’s a great product but it does depend a lot on how interested you are in timelapse and HDR.

Check out the OmniSlider at DitoGear here