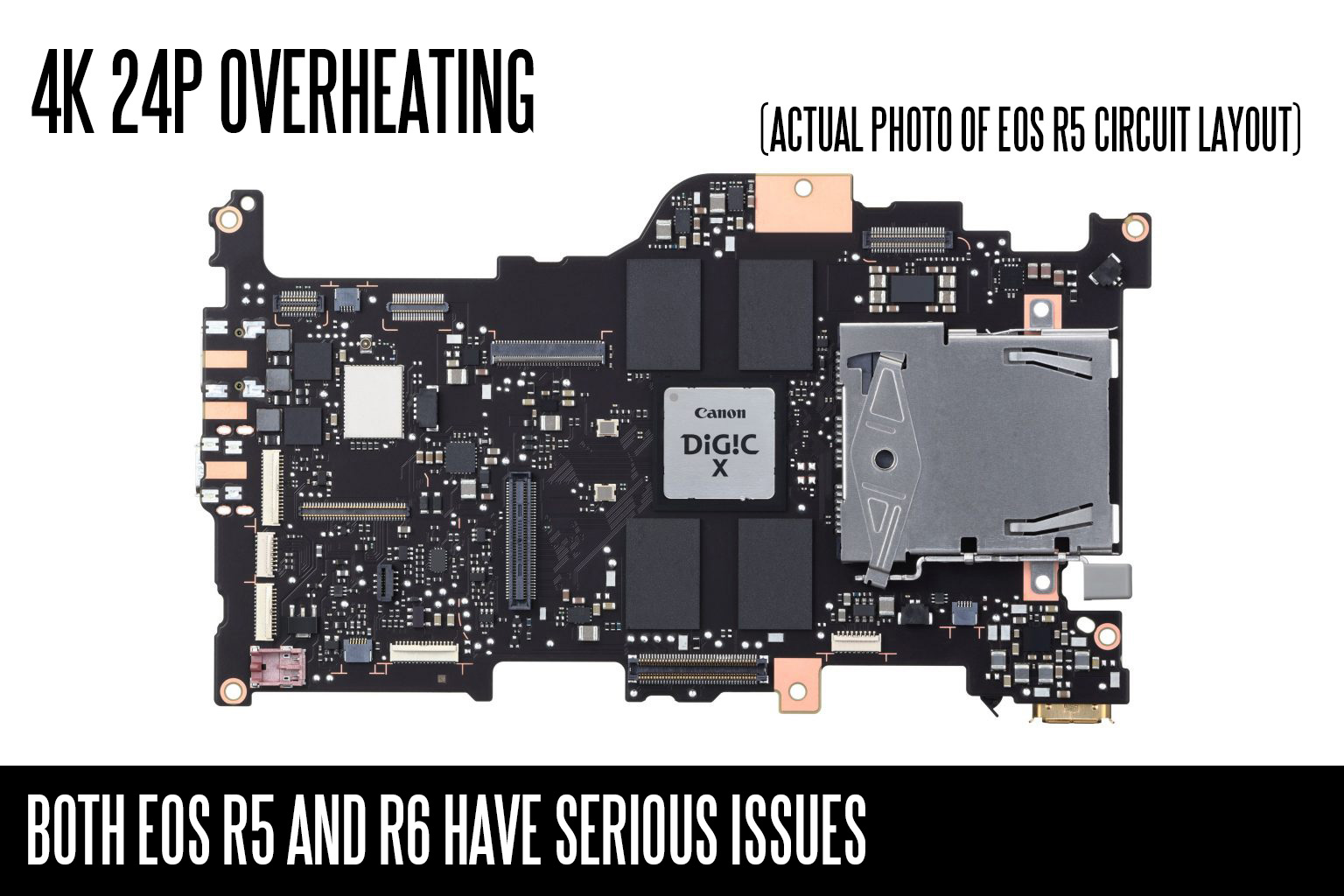 Canon are marketing the EOS R5 and R6 as reliable filmmaking tools that professionals can depend on during a shoot.

As we have seen from field-tests of both cameras, overheating nightmares demonstrate this just isn’t the case even on short shoots in high quality 4K 24p. The reliability issues are so serious that paid professional work is a complete gamble in 4K on both models.

Even the EOS R6 with the lower 20 megapixel sensor at the lowest frame rate (4K 24p) suffers repeated shut downs on a short shoot. In my opinion, this is a problem for Canon so severe it may even result in a full product recall and a class action lawsuit.

That’s because if we look at other precedents for defective electronics, it is not a good look for Canon to apply R5 and R6 reliability standards to other consumer devices, let alone professional products.

Let’s assume that Apple released a smartphone for $1000 (the EOS R6 costs $2500) aimed at the high-end of the consumer market, which turns off regularly throughout a normal day’s use due to an overheating processor. That is a class action lawsuit and recall.

If we assume Toyota makes a high performance car, which has an engine that overheats 20 minutes into a journey on the autobahn at 120mph, that is a product unfit for purpose and it would have to go back to the dealer.

However it seems a camera company like Canon exists in an alternative reality where they are free to release unfit for purpose products that garner the high praise of social media influencers and even higher pre-order numbers.

When Canon releases a reliable EOS hybrid camera that does both video and stills to the level of the competition, they’ll have my praise for doing so.

The problem is the objective factual evidence keeps getting in the way.

I really was all set to buy an EOS R5. But I’ve put my pre-order on hold and the same applies to the EOS R6 in September.

To understand just how wrong this situation is, we need to look at how Canon is marketing the new mirrorless cameras and what customers expect from these tools in the field. What are Canon’s marketing claims about video use? I found these within 2 minutes and used the official Canon websites to ensure authenticity:

As I rest in my arm chair, and eat a donut. I feel the trust ebb away like the chocolate on top eventually vanishes, but it doesn’t leave a sweet taste.

Instead there is only bitterness that the reality doesn’t align with what Canon promised.

It is easy on a technical level to understand how it came to this, because Canon said themselves that they didn’t bother with a cooling solution at all.

The only mitigation preventing overheating on the R5 and R6 is a “magnesium alloy body”, standard to nearly all cameras and a shut down procedure in firmware when it gets too hot.

The official statement makes no mention of a good conductor of heat inside the camera to take heat away from the CPU and sensor, like copper, or a heat pipe, standard in nearly all high performance electronic devices even high-end smartphones, it leads me to another opinion on the EOS R5 and R6, one that Canon may not like.

In my opinion this is a purposeful design choice.

I don’t think they wanted to prioritise thermal management at all in these products.

It’s important for Canon the Cinema EOS range continues unhindered as the go-to professional tools for filmmakers and videographers. The EOS R5 at $4000 may be an expensive professional tool, but it has less margin than a $15,000 camcorder.

Curiously there’s a lack of exploded view of the internals for the EOS R5 and how the LSI is integrated into the casing, so Canon isn’t showing us any passive cooling solution at all. As you can see below with the Panasonic S1H, an exploded internal view is quite common with other high-end camera launches, and clearly shows copper heat sinks on the mainboard LSI. The fan is also very thin and doesn’t add very much to the weight of the camera. In fact, it is lighter than a passive copper heat sink of the same size. 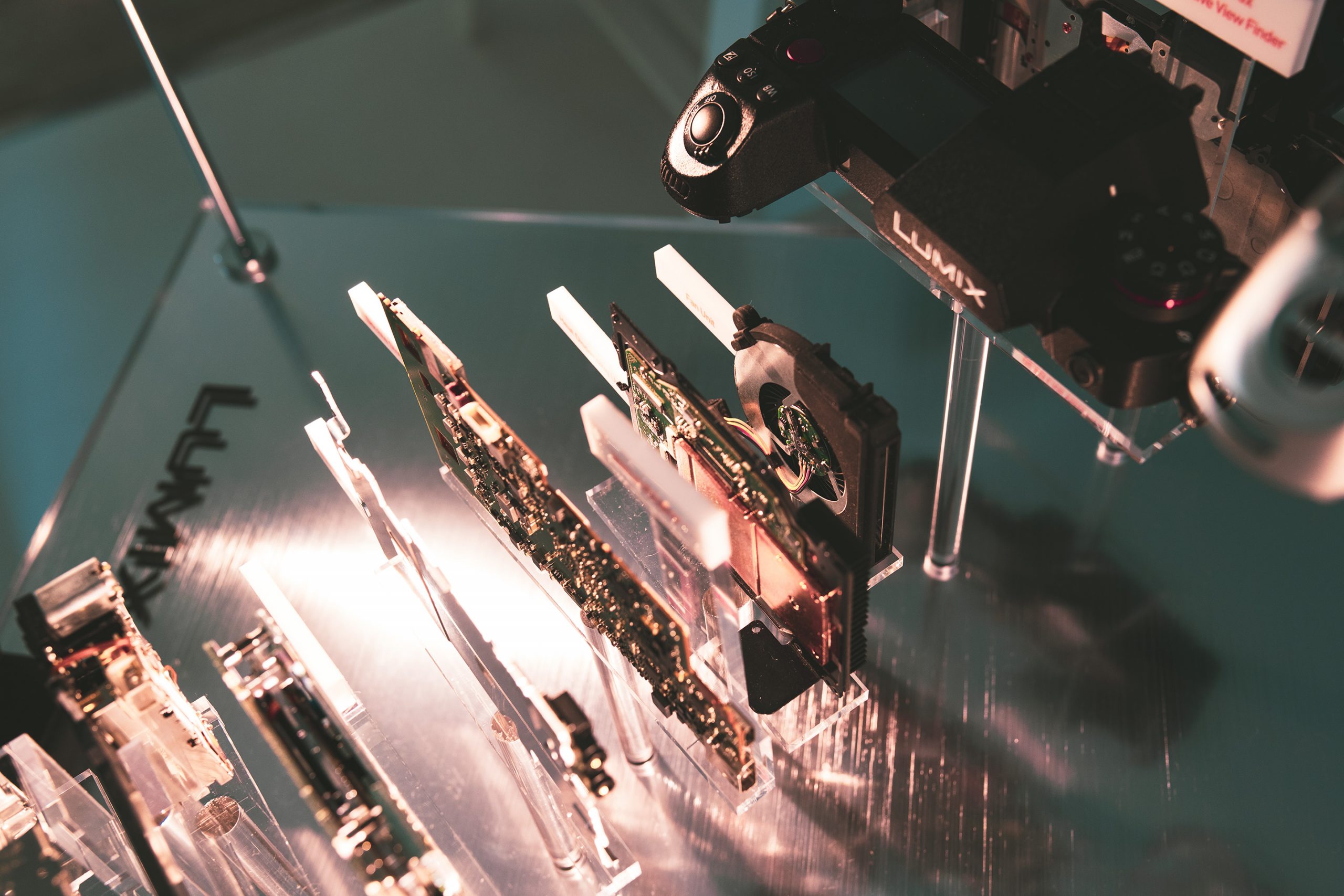 Look, heat limitations are clearly not great, but as long as you understand the limitations of the camera and use it appropriately you shouldn’t run into too many problems.

The camera is clearly capable of being used in professional environments and anyone who knows what they are doing won’t try and use it in situations or environments it shouldn’t be used in.

If you need long record times and you are going to be working in hot environments this isn’t the right camera for those jobs.

Don’t buy an R5 and then complain about these problems. You should clearly know what the limitations of any camera are before purchasing.

It is interesting to take a look back on some of the press statements at launch, which prompted a few people to pull the trigger on an EOS R5 or R6 pre-order.

Assuring buyers is the name of the game for many bloggers, because they stand to gain financially from affiliate links embedded on the same page for the same product.

Matthew is absolutely right about one thing. You should clearly know the limitations of a camera before purchasing.

So that’s why the former part of what he says is so important. Like:

“As long as you understand the limitations you should run into many problems”.

This is completely misleading and false.

The the limitations are not predictable and not understandable before a shoot begins.

You cannot predict how the camera will dictate the shoot beforehand. The ambient temperature, the time sat idle but switched on, the time spent switched off, the amount of live-view and menu use, the cadence and rhythm of the shoot and the unpredictable nature of filmmaking are all big variables so you cannot know for certain exactly how they’re impacting the camera even during the shoot let alone beforehand.

The specific 4K modes in use at any one time also have a big variance on the outcome. 4K/120p and 8K have a big impact. Furthermore, there is absolutely no temperature C/F indication on screen. No clock ticking down like there is for a hard limit of 20 minutes for each take. In the real world, heat-related interruptions occur at random unpredictable moments.

The cameras are unusable.

This dependability gained the company a lot of followers in the enthusiast market too.

Now the range has been extended to create a hybrid stills/video mirrorless camera for the same customers, the same aim applies but it no longer delivers.

The Canon EOS R6 replaced the 6D range for enthusiasts interested in 4K video, with a borderline defective product. It is clearly not as described.

Whether or not consumer groups choose to take the issue to a class action, the harm to Canon’s brand is done.

Indeed a full recall and redesign may be the only fix, but I simply cannot see Canon doing this. Therefore it’s likely this problem isn’t going to go away. It may go on haunting Canon and the people responsible for such poor decision making for a long time, and deservedly so.

The solution for Canon in the short term is simply to admit the mistake and to apologise, whilst doing a deep internal analysis of why senior management thought it was ok.

Canon need to apologise – to me and you

In closing, I believe this blog as well as my readers are owed an apology. If Canon can accept that a very serious mistake has been made and aim to rectify, rebuild trust and directly address the EOS R5 and R6 4K problems, only then will they be able to move forward on reliability.

This is an even worse situation than the Leica 4K recording debacle. When I reported the battery power issues on my SL2 in 4K, Leica did at least initially make an effort to communicate with my readers, to explain the situation and to promise a fix although I didn’t feel an apology was really offered to customers, and a fix hasn’t yet been released.

Canon has not chosen to engage with us and this is deeply wrong.

The truth is that both the Leica SL2 situation AND the Canon R5/R6 issues are a disaster and completely unacceptable behaviour. The right approach for Canon next is to to involve new people in the testing process and fire those responsible for sugaring their feedback during the test phase of the new cameras.

Not only should a Canon representative apologise to my readers for the problems, they should conduct in-depth analysis as to how it can be fixed with a product recall. If I purchase the EOS R5 myself and review the camera on EOSHD or involve it directly in my filmmaking, I’ll have questions of my own and I expect Canon to answer them.

Canon has to face up to the truth, rather than hide from fair criticism.

To directly involve me in the testing process for video would also ensure that future cameras aren’t released “unfit for purpose”.

Such a situation can never be allowed to happen again, at any camera manufacturer

I think it says a lot about Canon today that so many obfuscatory tactics are used by marketing at launch. By using the bluster and hype of social media influencers rather than the level headed and practical assessments of independent filmmakers like Vincent Laforet, Canon have released two unfit for purpose products with huge fanfare that doesn’t align at all well with reality.

Aimed at professional video users and enthusiasts, the pre-orders come in, many under the misconception that the cameras will shoot 4K to a professional standard.

For me, “professional standard” doesn’t just mean a high quality image, it applies equally to reliability because without that you have no image!

So I think the situation stinks, to be frank.

The arc of the moral universe is long, but it bends toward justice.

I do believe that sadly Canon are in for a shock when the return requests come in to dealers. Video is a sizeable percentage of sales and all it takes is for people in various climates to simply use the cameras for themselves, as intended, for them to realise how bad the overheating problem is in the real world.