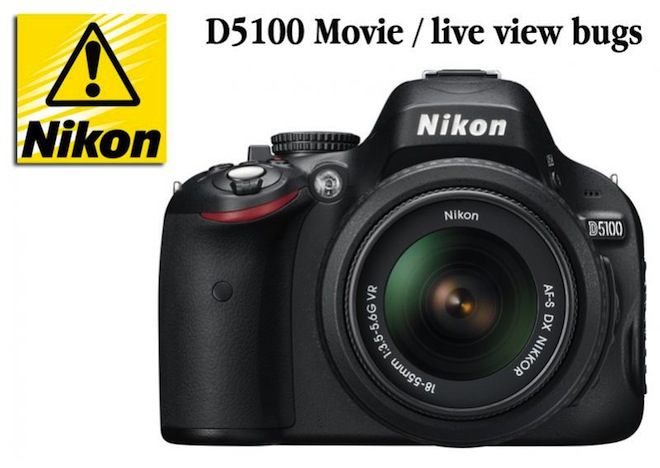 We told them but they didn’t listen! The D5100 has all the same live view problems as the D7000, one bug has even been around since the D300 and they haven’t fixed it. The D7000 meanwhile just had a firmware update, which doesn’t fix anything.

The purpose of this article isn’t to slam Nikon but to draw attention to exactly what needs fixing. It is clear that Nikon’s philosophy to live view and movie recording so far has been that this function is only there to facilitate the point & shoot ease of use like a compact, because in terms of manual control their live view is as bad for stills as it is for video.

Problems affecting both stills and video

These problems affect all Nikon DSLRs whether cheap or expensive. The same problems present in the D3100 for example also affect the D7000. The only area where the D7000 differs is that the movie mode responds to manual ISO and shutter speed control without the need to hit AEL – although the live view display still does not – no manual exposure simulation or meter.

Despite these problems which are a waste of a good camera, Nikon spent valuable R&D time on two features people will never use since the live view and movie experience is so diabolical and buggy – the D5100 has less rolling shutter and faster live AF than Canon DSLRs and an articulated screen. All completely wasted by the firmware problems.

Whilst any camera is capable of nice images, the advantages of the D5100’s slightly better high ISO performance does not make it a compelling alternative to the Canon 600D or Panasonic GH2, the huge pain is not worth the ever-so-slight gain.

So if you like to have fun guessing where the edges of the frame are and what the exposure is, buy a Nikon.