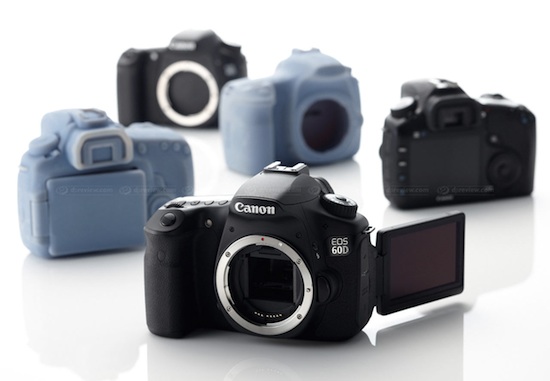 Canon have released the same camera 3 times in 12 months. But here, EOSHD.com explains why they are right (from a business perspective) to do so.

In October 2009 Canon released the 7D. They had developed a brand new cutting edge sensor for the camera and spent a great deal of time and resources on it, plus the new AF system.

In 2010 Canon reused the 7D’s internals twice more – first in the much cheaper 550D 6 months later and then almost a year after the 7D we have the 60D which is expected to be the sensor’s swan-song and the last appearance of DIGIC 4 (the cause of that nasty moire and aliasing).

The 60D is not groundbreaking but it has some great features and a lower price than the 7D. The rotating screen is a huge benefit and manual audio controls are very useful for creative filmmakers. I just wish they’d been in there from the start, on the 7D.

Instead 12 months later we have a hinge and a firmware tweak on what is basically the same camera.

Now call me cynical, but have Canon lost all sense of progress?

Of course not. In the background they have been developing the next generation of sensors and image processing chips which will eventually give us a big exciting leap forward in video quality.

It is a sound business idea to release the 550D and 60D, reheating as much from the 7D as possible whilst targeting 3 distinct audiences. Entry level, enthusiast and prosumer.

This is exactly what Canon have delivered with the 550D, 60D and 7D.

The Canon 7D got the prosumer crowd’s money. It was released first, a good 6 months before the 550D. During that time, the early adopters would have enjoyed a great camera which was cheaper than the 5D Mark II and which had a great video mode – whilst those who could not afford it had to wait.

When the 550D was released, some 7D owners had buyer’s remorse, that if only they had waited they could have saved a bundle of money. This is understandable only from the perspective of someone who bought the camera a week or 2 before the release of the 550D. Yes – not everybody who complained was wrong to do so, but many forgot the positives of being an early adopter – and the choice was always in their hands. Cameras always get improved and the same features & quality go down in price rapidly.

When the 60D was released, I was extremely critical of the conservative product launch. I do not like to see reheated technology from 12 months ago come along as a ‘new’ camera, it is not exciting for me. But in business terms, it makes perfect sense. Canon wanted to give certain enthusiasts who had not jumped onto the 7D (too expensive, too soon?) or the 550D (limited feature-set?) a camera that they too could get excited about.

Put bluntly, it is more profitable for Canon to taylor the same camera to different people with a staggered release strategy, rather than try and put everything in the same camera off the bat and then go quiet for 12 months whilst they worked on genuinely new kit.

I have no problem at all with that. But the reason I am critical of the 60D is that I am getting impatient for some really innovative technology.

Since the 5D Mark II and Panasonic GH1 changed the game all those months ago, at the start of 2009 we have not had a genuinely exciting new video DSLR come along. Almost 2 years is a long time to wait in this game, especially when the improvements we need are relatively minor.

The Canon’s need a fix for moire and aliasing, resolution needs improving (it looks like upscaled 720p) and the Panasonic GH1 also needs better resolution, and better low light performance.

Most of the other manufacturers are copying the market leaders, or chasing sales – not innovating. Canon are chasing sales too of course as the 60D shows, but they are still innovating with sensors, lenses, AF and countless other initiatives in the background whilst doing so.

Meanwhile the Panasonic GH1 hack gave us some welcome relief because we had some major improvements for free, and the main Achilles heel for GH1 owners went and vanished overnight!

Although I have been critical of both Canon, Sony and Nikon this week with conservative entry-to-mid range product launches which feature nothing new (or some backward steps) as far as video modes go it is also worth mentioning for the sake of being even handed that although I love the GH1, Panasonic are just as guilty when it comes to reheating existing technology for business / profit reasons.

The Panasonic G1 was released in September 2008, featuring an articulated screen a full 23 months before it appeared on a Canon DSLR! It was an innovative camera which took years of R&D expenditure to achieve, because it was an entirely new system – with new lenses too. Panasonic then reused the sensor not once, not twice but 3 times over the next 2 years and now the same sensor that is found in the G1, G2, GF1 and G10 is looking distinctly long in the tooth.

The Panasonic GH1 had a new sensor, and this too is being reused in the AF100 with small tweaks.

It has become a reality in the consumer and prosumer camera markets for manufacturers to reheat existing technology and to cover as many different target audiences as they can, distinguishing features only with very minor body or firmware tweaks.

Developing genuinely new and exciting technology is very expensive, and in times of economic hardship we need to get used to these rather cynical marketing tactics by camera companies and expect a more conservative approach over 12 month cycles.

I am led to believe that the Panasonic GH2 might also be more conservative than we hoped.

We may have to wait a little longer for the improvements to DSLR video image quality we all hope for – but that’s life! Good things come to those who wait.