Above: the Olympus 12mm F2 in action on the GH2

Here’s a gear guide along with a round-up of footage for low budget shooters. There’s a big difference in price between the very capable Panasonic GH2 and the new 5D Mark III. One is $800 new and the other $3500. All the discussion so far has been about the camera – is it worth $3500? Well unless you’re going to drill a hole in your lens cap and do pinhole photography, it all comes down to the price of lenses not the body. 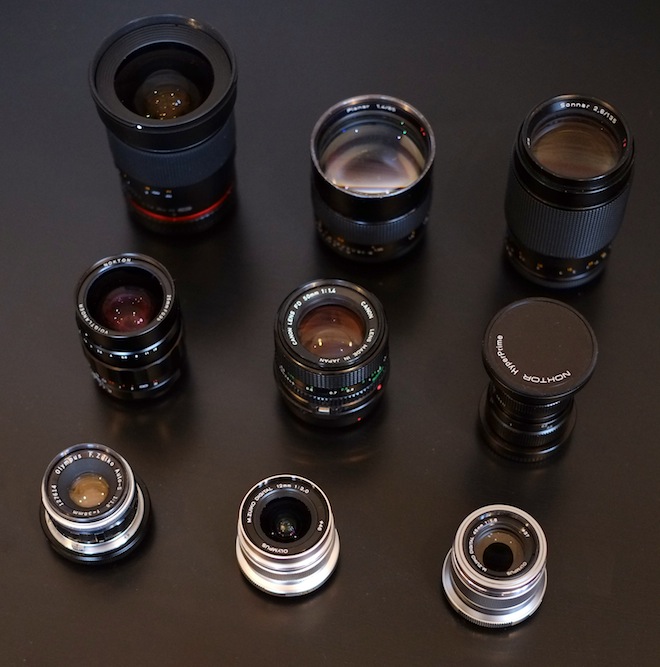 I’ve scored up the costs at the end of each section for both cameras.

Feel free to choose the advice below to suit your situation.

I have a bunch of Canon EF glass

The 5D Mark III would be the most sensible choice. The GH2 doesn’t have a decent Canon EF adapter with aperture control yet (but consider the Sony NEX 7 with Metabones adapter).

I have a family of Canon FD lenses

These can’t be used on the 5D Mark III without optical correction in the adapter which really hurts image quality. The obvious choice here is to get the GH2 where they adapt with the minimum of fuss. The adapters are $50. These lenses have manual aperture control rings unlike the newer EF versions so can be used without electronic communication between lens and camera. The cheapest FD for the uninitiated is just $50, for the 50mm F1.8 SSC.

I need a good wide angle lens, preferably with a fast aperture

Wider than 24mm equivalent and at F2.8 or slower and the situation is reversed. There are plenty of affordable options on the 5D Mark III like the Samyang 14mm F2.8 and Zeiss Jena 20mm F2.8. On the GH2 there is the pricy but very very good 7-14mm F4 Panasonic Lumix lens.

The GH2 likes to eat fast glass not just for low light stuff but for a shallower depth of field. The Voigtlander 25mm F0.95 is superb and my go-to lens on the GH2 for the way it looks in any situation. It is $900 but worth it and so is the Micro Four Thirds Panasonic Leica 25mm F1.4.

I need a fast telephoto lens

Getting a good fast telephoto is extremely expensive for the 5D Mark III and you end up with a massive lump of glass. We’re talking 2-3KG and with its own tripod mount! The Zeiss 300mm F4 is a good compromise for lower size and weight if you are happy to boost the ISO in low light. However on the GH2 you can shoot telephoto in crop mode with the tiny Nikon 85mm F2 or Contax Zeiss 85mm F1.4 for an equivalent focal length of 400mm with no resolution loss. A definite advantage.

Above: Proud Beast, shot with the Contax Zeiss 85mm F1.4 on the 5D Mark III

The GH2 has the 14-140mm and 14-42mm Lumix lenses as their main zooms. They don’t have constant apertures so your exposure jumps as you zoom. The 14-140mm has a good range but suspect build quality and is slow at F4-5.6. It can however really help you get the job done because of the fantastic range. The tiny 14-42mm lens is not very special but it is cheap. They both have stabilisation and AF in which is silent in video mode. A 5D Mark III zoom doesn’t have silent stabilisation in video mode and AF is stills-only. Most will need a faster than F4 aperture on the GH2 to get a satisfyingly cinematic depth of field. On the 5D Mark III you get this with a relatively common F2.8 zoom. On the GH2 you’d be stumping up for the Olympus 14-35mm F2 or waiting for the Panasonic 12-35mm F2.8. 35mm isn’t very long but you don’t need to buy the very expensive Olympus 35-100mm F2 if you’re only doing video – Ex-Tele mode takes care of the long end even at 35mm.

I have no money!

No question – GH2. Quite apart from the price of the body, you get a wider range of lenses sub $200. Look particularly for the Canon FD mount lenses on eBay, the most common of which is the 50mm F1.4. Old M42 mount lenses like the Helios 44M 58mm F2 and Asahi Pentax 55mm F1.8 offer great bang for buck – less than $50 in some cases. The 44M-2 even has a stepless aperture ring.

I’m interested in anamorphic for the ‘Blade Runner’ aesthetic

Ah – good choice! No single camera is particularly more suited to anamorphic shooting than another but particular lenses are. Canon FD glass works well, and those only fit the GH2’s mirrorless mount. On the 5D Mark III it is difficult to find a 50mm and anamorphic that go well together without vignetting. Some of the cheaper anamorphic lenses like the Panasonic LA7200, Century, Optex and Proskar lenses vignette more easily on a full frame sensor than the Iscorama 36 which was designed for a 35mm Nikon-F mount, so you may have to spend up to 5-10x more on an anamorphic lens if you plan to use it on the 5D Mark III.

Once you have one, and come to choose an aspherical lens for, the cheaper the better. Anamorphic lenses seem to work best with simple optical designs. The Iscorama 36 works superbly on the 5D Mark III with a very cheap Nikon E 50mm F1.8 pancake and Helios 44M 58mm F2, plus you’ll unleash the spectacular flare with a less sophisticated coating on the aspherical. One more note – Most LOMO anamorphic lenses are OCT 18 mount and don’t fit the 5D Mark III, only a mirrorless mount.

Above: an Iscorama anamorphic in action with the $20 Helios 44M-2 on the GH2 in Shanghai

Then it is the Carl Zeiss CP.2 lenses for you. Very good optics, no breathing whilst racking focus and industry standard design. Incidentally the CP.2s are also now available in Micro Four Thirds mount for the GH2.

I want and need everything on this page

Here are the complete totals over the full range of lenses, including anamorphic but not including the Compact Primes which are the same price on both cameras.