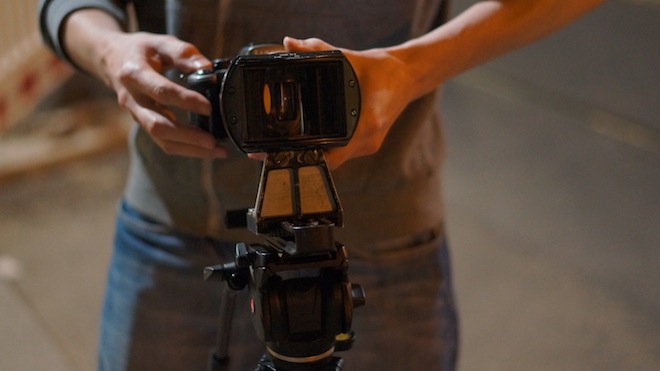 Above: myself shooting with an anamorphic LOMO on the GH2

I’ve already fired off my suggestions for the GH3 to one of my most helpful friends in the industry. Thanks a great deal. Now you can see the suggestions to in this open letter to Panasonic. I’ve listed the requests in order of priority. Yes I’d really like to see that Canon G1X style built in ND filter.

My suggestions for Panasonic

Digital ND filter
Ah the mythical ND. Such a hard engineering task that the FS100 lacked one at $5000. The FS700 made up for it by adding a very bulky mechanical one. But what confuses me is that the Canon G1X has a built in ND and a Micro Four Thirds sized sensor in the body the size of the NEX 7 for $700, so it can’t be that hard can it? Having to shoot at 1/1000 in the sun is such a downer for motion cadence and the cinema look. Not much point of them giving us 24p if we have to shoot like this outdoors. Vari-ND filters are also a real pain and the general consumer won’t use them, and then will wonder why his videos look too digital and jittery. A built in ND is a MUST and we MUST fight for it.

Electronic follow focus attachment
This would work with Micro Four Thirds Lumix and Olympus lenses to smoothly and silently rack focus using AF motors, no mechanical set-up required. It is not a case of Panasonic building one – it is a case of a simple firmware extension to open up the USB port for third party accessories which drive the lens and camera, like Oki’s follow focus for Canon DSLRs.

HBR mode at 50Mbit
We need higher bitrates out of the box or a codec like the FS100 which does well despite being only 24Mbit. It is far less risky for Panasonic to give us what we want and maintain control of their camera firmware than have a third party hacker do it. Though I want the hack project to continue, it is silly to limit the camera to 24Mbit for maximum compatibility and to avoid support issues with clueless consumers when the hardware is designed to do more. Hopefully the new codec will hold onto more in the shadows too.

Film-like noise grain
I actually like noise here at EOSHD. The GH2 already has a lovely fine noise pattern which is very cinematic, especially with the hack. Hopefully Panasonic will not feel the need to smear it with over the top noise reduction – and if they do then at least allow us to turn of noise reduction entirely, not just reduce it. The same goes for any digital sharpening. Off switch please!

Better colour
Either the sensor or JPEG engine does not give us as good colour as a Canon or Olympus. It is subtle but needs fixing. The GH2 improved upon the GH1 in this regard but it is still not quite there.

Uncompressed HDMI 4:2:2 (1080p – not interlaced)
Now Nikon has it, Panasonic need to compete and this is a biggie which elevates your camera into serious filmmaking territory.

Megapixel count – keep it at 18MP or decrease back to 14MP
Do consumers still care about resolution in stills mode? Nikon have seen strong sales of their 24MP D3200 and 36MP D800 so sadly I have to say yes. But the same logic does not apply to the GH3 because it is a high end niche product, and the people who buy it are better educated. It will never be truly mass market and at the top of the Amazon best seller list because it doesn’t cost $500 and doesn’t have a Canon badge.

Battery grip!!!
Please can we have a grip. Sometimes the size of the camera is not the issue – rather, we’d prefer to carry fewer spare batteries! Which is a bigger pain? This especially applies to video shooters because they use up the battery quicker than photographers. The GH2’s battery was a bit let down, it was worse than the GH1 and physically smaller even though the camera could easily take a physically larger pack.

Don’t be tempted to go slimming crazy
I prefer the GH2’s body shape to the NEX 7 or GX1.

Worldcam / region switchable
I don’t think a lack of 25p helped Panasonic in Europe. This stopped a lot of influential European filmmakers from giving it the attention and serious pro work it deserved. Likewise locking the Japanese camera’s language menu didn’t help counter grey-market sales or push people to buy the AF100 for pro work – it just crippled the GH2’s sales. Panasonic should look seriously at taking a Canon approach to a world cam GH3. This isn’t just a problem for pros but for consumers. A region switch is an operational necessity on a video camera to avoid flickering footage, especially one aimed at rich US tourists who use it on holiday in Europe!

Peaking
An improved manual focus aid. Peaking or a punch in magnified view which does not obscure your composition. Have the option to put it in a window like Magic Window with Magic Lantern on the 5D Mark II.

Flatter cinema gamma mode
Reducing contrast does not have as much of an affect as it does on nearly all other DSLRs. There’s no CineStyle or custom flat profiles. Cinema Gamma was a bit rubbish, Smooth looks far better! There’s no ability to adjust the curve in-camera like there is on the OM-D E-M5.

Headphone socket
Headphone socket not just mic – and dump the 2.5mm mic socket for a 3.5mm one. 2.5mm is such a pain for 99% of the mics on the market, and the adapters tend to fall out very easily.

What not to expect

AVC Intra 10bit 4-4-4 and XLR audio jacks
These are not for consumer cameras. They’ll be on the AF100 successor and the new Vari-Cam not the GH3.

Raw
There will be no raw codec. Average consumers don’t have the storage, computing power, software or expertise to handle it, nor do they have any need for it.

4K
Would be amazing to see Panasonic include a rudimentary 4K MJPEG mode because I am pretty sure the tech is there at the lower price point – heat and battery issues maybe not quite as straight forward to solve though. However mass consumer appeal simply is not there yet either. The TVs and PCs needed to display or edit 4K are still 2-3 years away from the high end consumer market.

Remember the features on this page represent a bit of a wish list. Next time I’ll blog about some of the smaller features Panasonic can add to the GH3 which would make a big difference.