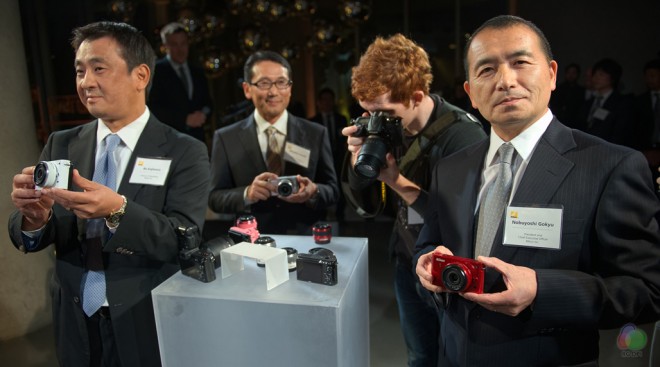 Soon the single lens reflex design will be obsolete. Mirrorless technology is the next evolution of the DSLR into a fully electronic camera. An electronic shutter, OLED EVF, better AF and improved video modes all come from mirrorless technology production. So with this in mind it is clear to me the folly of the Nikon 1.

Nikon have gimped their future to prop up the past.

The Nikon 1 system is so under-specced to keep it under their DSLR range it is almost ridiculous. A 2.7x crop sensor and on the video side a dated recording format of either 60i or 30p. This may give their traditional DSLRs and DX lenses a slightly longer shelf life but by then the competition (Sony and Panasonic) will be so far down the line both in terms of market share and next generation camera technology Nikon might one day be considered an also-ran.

Nikon are just not handling this transition period for cameras – from predominately optical photographic to almost entirely electronic devices – with very much balls or vision.

Sony’s approach with SLT and a high end NEX 7 mirrorless is the right approach. This sells. The NEX 5N for instance has the image quality of the Nikon D7000 but the size of a high end compact. The Nikon V1 doesn’t have DSLR image quality at least with the current CX mount lenses.

Mirrorless and SLT technology advances the tired old DSLR on from its 50 year heritage design in an exciting way – just as the Apple iPhone moved the smart-phone on from the stylus and keypad. This is what excites the paying customers on the shop floors and sells cameras. The Nikon 1 competes directly against the likes of the A65, GF3, NEX 5N and Olympus EP3. The Nikon 1 has brand appeal but very little else. No USPs just gimmicks.

Like the NEX 5N it is not a pro offering and nor does it need to be – this is a consumer camera for a consumer electronics market. Now this market is massively under educated. Mostly sales reps are not photography enthusiasts, they’re salesmen and they don’t always tell the truth. There is poor info at the point of sale in every city. Buyers are also let down by global marketing campaigns that work on cliched lifestyle ideals rather than extolling the technical virtues of the camera as a creative tool.

Now a product as eclectic and under specced relative to the competition as the Nikon 1 series is going to be a hard sell, especially in America where mirrorless sales have been poor.

10MP versus the 16MP of the cheaper NEX C3? A 10-30mm zoom? Doesn’t sound very good does it? A sensor size between a compact 1/1.7″ and a Micro Four Thirds format that is already considered ‘too small’ by many (wrongly). I feel most consumers would probably just get a GF3 or choose to keep the benefits of a pocketable zoom compact like the Canon S100. Does a consumer market really exist for a product that sits between the Canon S100 and Panasonic GF3?! I really think not and I believe stores are going to have a hard time bullshitting it into existence as well!

Video – as we know – can be a major selling point but someone needs to tell Nikon that Super 35mm 1080/60p and 24p is where it’s at. Their product managers and people giving feedback clearly did NOT-HAVE-A-CLUE when it came to video. They are asking all the wrong people. Customers don’t want to playback or edit interlaced footage in 2011 when all their displays are progressive, it is a total pain. Customer’s don’t want 30p they understand that cinema and Blu Ray looks better at 24p. All Nikon’s rivals – Canon, Panasonic and Sony universally offer us 24p, yet Nikon chose to ignore the obvious. 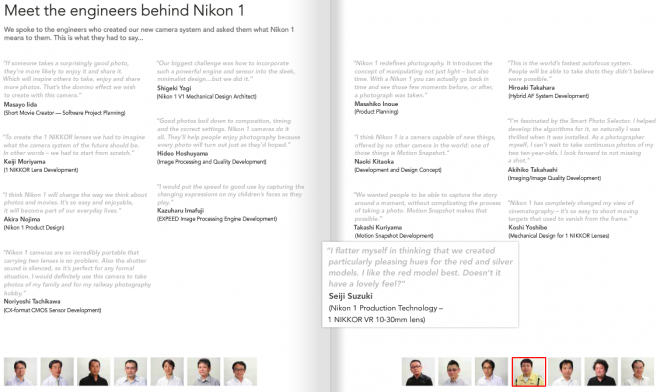 Above: comments from the Nikon 1 engineering team members, click to expand

All this is very sad. To a certain extent I can’t blame Nikon for such a tepid mirrorless debut. Sony, Panasonic and Olympus all have one thing in common – they don’t have a huge legacy of F-mount or EF-mount lenses on DSLRs so they have no choice but to start from scratch. Minolta lenses are a thing of the past despite being the basis for Sony’s Alpha mount. Canon and Nikon make a huge chunk of their DSLR market profits from optics so it’s not surprising that the thought of starting from scratch with a mirrorless mount doesn’t fill their hearts with unbridled glee.

Sensor size is not the be-all-and-end-all of image quality that people seem to think it is, but many consumers DO equate DSLR quality with a large sensor. That spelt trouble for Micro Four Thirds especially in the US but the situation is much worse for the Nikon 1 system now.

Why are the Japanese obsessed with miniaturising everything? Their biggest market – the US – has a culture of bigger = better and yet Japanese camera producers wonder why their under-specced miniature mirrorless offerings can’t find a market foothold there?

Enthusiasts lust for sensor size like compact users do for megapixels yet Nikon chose to go for a small sensor and low megapixel count. Who are they targeting? I think they believed size would be the main selling point of this camera. To think they could beat off the challenge of Sony with a slightly smaller kit lens! What were they thinking? High speed modes? Those don’t sell cameras either, look at Casio. The lenses don’t even seem much smaller than Micro Four Thirds and the body is not much smaller than a NEX 5N. What have they gained with this massive crop?

But what really frustrates me about this race to trim inches from an interchangeable lens camera despite not making the zoom lenses any more pocketable (one single Panasonic offering aside) is that mirrorless technology – like Expeed 3 (a more powerful processor than in their $5k pro DSLRs) – is the future of photography and video yet is being massively undersold. We have only two mirrorless cameras that are not aiming for the small-size-crazy low or mid-range, the NEX 7 and GH2. Nikon are under-exploiting their tech and they need fresh management to throw all the weight they can muster behind the trasition from the old mounts to the new.

When Canon last changed mounts from the fantastic FD glass of the 60’s, 70’s and 80’s they didn’t get it right either at first with EF and ended up losing a lot of customers to Nikon. Now it is about to happen to Nikon. They are just not throwing the weight of their technology and conviction behind future mounts. Soon Canon will need to change their EF mount to a mirrorless one as well.

F-mount is dead! Optical viewfinders are dead! Chunky mirrors that flip out of the way for video are dead! They have been superseded on the consumer market and will soon be in the professional market.

If Nikon and Canon spent as much time on innovative future cameras as they did protecting the sales of existing F mount and EF mount lenses and cameras, they’d be unbeatable.

Instead they are letting a bunch of Playstation and microwave designers run away with the market share.

Sony have shown that the optical viewfinder is obsolete for consumers and prosumers, they have dumped it from their entire line and replaced it with the beautiful OLED EVF. Olympus have superseded phase detect AF with contrast detect AF that is faster and more accurate especially in low light (even compared to the pro Nikon D3!). Panasonic have done a true video and stills hybrid and were the first to put video optimised lenses onto the market, as a result they are well ahead here, with a collapsable powered zoom pancake which is unique on the market and eliminates the main unique selling point of a high end compact in one fell swoop. These are all selling points. Canon and Nikon have shown customers something very different – conservative management scared into a paralytic state by not wanting to endanger the sales of high margin SLR bodies and lenses. But they are going to have to sooner or later.

Nikon have been forced into the mirrorless market, reluctantly, and it shows.