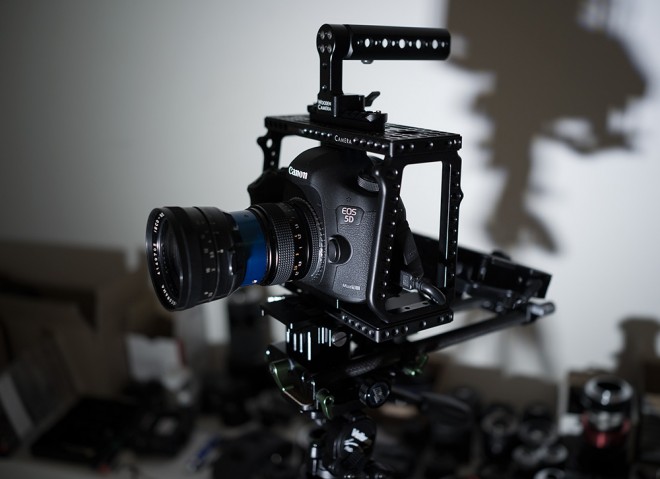 This was a great week. It is the first time we’ve seen this kind of moving image from a full frame sized sensor in raw. A pristine 2K 14bit image that’s like a 24fps digital film negative or a digital scan of VistaVision. It’s also a breakthrough for accessibility bringing raw video to many talents for the first time, when the only other accessible raw shooting cameras out there have been in extremely limited supply.

The news of 5D Mark III raw video (and the huge quantum leap in image quality that has given us on DSLRs) has generated the largest and most enthusiastic response I’ve ever seen on EOSHD. Even though raw video and development code are relatively arcane subjects, the subject garnered mass audience attention with tech blog Gizmodo picking up the story and digital photography authority DPReview running it as headline news. By the 5th day the quickly shot video posted late on Sunday evening had totalled 487,000 impressions and 98,000 plays, and mine was by no means the only one out there! I’m amazed the Magic Lantern forum didn’t melt and they handled the eager questions of 5D Mark III users very calmly.

The only cameras that have a similar aesthetic at the moment are the Red Epic with Dragon sensor and the Arri Alexa Studio in 4:3 with anamorphic glass. The Cinema EOS range is all 8bit aside from the raw tap on the C500, but then that isn’t $3000 and isn’t full frame and the Blackmagic Cinema Camera has a much smaller sensor, and therefore a very different rendering of the lens.

The 5D Mark III with Magic Lantern really is unique and a new image quality benchmark under $20,000. Perhaps the Canon 1D C comes close in feel but it only shoots 8bit MJPEG so cannot be bossed around in post with the same degree of creative control.

This is the biggest single leap in image quality for DSLRs since the advent of DSLR video and as significant as the original introduction of the 5D Mark II back in 2008/09.

Like everything creative, post production is time consuming but I love and need the control raw gives you. Raw on the 5D Mark III is a creative dream.

Many of the professionals who used to be happy with workarounds for better image quality, be it Super 35mm adapters or DSLRs, are now shooting comfortably with Cinema EOS cameras. They were far more muted in their excitement, preferring to highlight some of the practical issues around shooting raw rather than mentioning the image quality and creative possibilities of the hack. 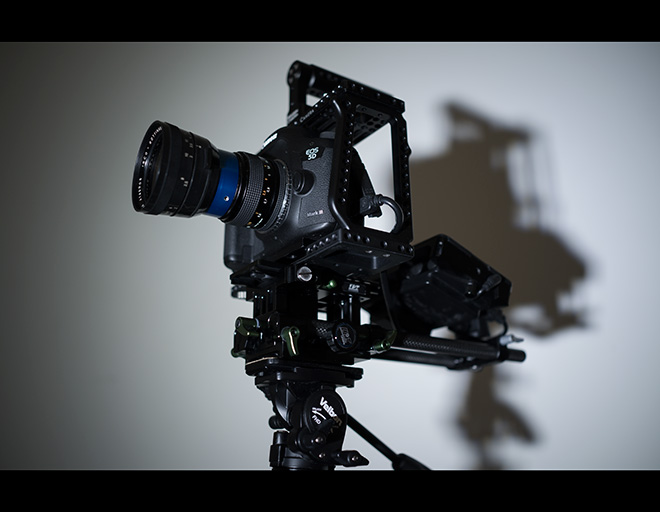 In some filmmaking environments a camera is like a hammer, a tool which gets out of the way and gets a job done efficiently and effectively. But aside from the practicalities of getting done a job to spec and to a time frame, think about all that artistry inherent in using a camera and delivering a film. We all want convenience but for me, the camera is more than tool, it is emotional and intuitive, not just functional and technical. In the same way that film stocks give a certain feel, the same way even a colour temperature does – it’s all part of our emotional palette as humans.

We have a unique image here and we should cherish it. It’s even free.

Price and accessibility being obvious reasons why to get excited about this but creatively it matters the most.

Camera aesthetics are linked directly to emotional reaction. Style is a subliminal trigger for our thoughts as we watch a movie. It matters.

Vincent Laforet is a photographer and filmmaker with a high profile track record in using DSLRs at the high end of video and movie production.

I asked his thoughts about the recent developments –

Vincent: Too little too late in my opinion. C Series and other cameras are what people should be focusing on… but I am looking into it to be honest… the RAW (sic) is cool – just the HDSLR limitations are still pretty severe relative to other cameras and production needs.

EOSHD: What do you think the biggest hindrance is – Hack reliability? File sizes?

Vincent: Hack reliability – and can the body TRULY survive doing this over time (heat/damage?)

I think Vincent will change his mind further down the line when the raw recording module is more developed, the workflow better and the camera totally reliable. I actually think high end productions will find a lot to like about raw on DSLRs too. The shortcomings of DSLRs didn’t stop Hollywood shooting reams of feature film scenes on DSLRs. There’s still stealth factor (Natalie Portman and Aronofsky on the New York metro), POV and helmet cameras, crash and vehicle cameras and the full frame look for framing faces so ably put to use on House in the hands of Gale Tattersall. To have all that in Alexa rivalling raw is ground breaking. New compact gyro stabilised rigs like MoVI work better with a small DSLR than an Alexa or fully kitted out Epic, so there’s another reason why a high end production team could and should embrace the 5D Mark III with raw not to mention the fact that the image just looks nicer than the Cinema EOS C300. Raw from a full frame sensor as good as the one in the 5D Mark III is just flat out better looking than compressed 8bit MPEG!

When Vincent shot Reverie that image was considered cutting edge, now it is superseded by the C300, 1D C, etc. The raw image from the 5D Mark III supersedes even those in some ways. That is exciting.

When Blackmagic first announced their Cinema Camera, and again this year at NAB with the Pocket Cinema Camera and 4K Production model, they generated a similarly excited response at NAB many times larger than the usual camera launch.

Raw on the 5D Mark III is in many ways even bigger news because the image is better and the design of the camera is lighter, smaller and it happens to do superb stills as well. Pricing is just as attractive as the Blackmagic at around $3000 body only.

In this situation buyers look to DSLR community leaders to advise them. One’s response to this news is more muted than his reaction to Blackmagic and both raw-related reactions were more muted to the fan fair given to the $6000 Canon 1D X. The blogger admits to loving a full frame image and that on the 1D X for your extra $3000 you get a slight sharpness improvement over the 5D Mark III. Now the hack has taken the full frame image of the 5D Mark III to a whole new realm and way beyond the 1D X, there’s not the same enthusiasm from him for it. I’m baffled by this, and similar views from others, who have pigeonholed this groundbreaking event as a hobbyist thing. C’mon! Raw is the future. Storage space and media capacities are improving so quickly that they have given us a glimpse of this future already.

Similar to me with my love of raw on the BMCC and 5D Mark III, he’s now a Canon 1D C owner for the image,and the image alone, not the headaches of actually shooting with it. As I said in my review of the 1D C it has many practical and ergonomic issues due to being a DSLR with huge file sizes on compact flash cards, but the image is beautiful. The blogger in question happily endorses such an expensive camera based on the superior image, but not the arguably superior raw shooting 5D Mark III for $3000!  This is inconsistent.

Magic Lantern have given Canon customers a lot of superb functionality over the years for free and I believe they should be richly rewarded for doing so. They are an incredibly skilful team of developers, with unique knowledge. To call Magic Lantern a ‘hack’ is not accurate. It is as sophisticated as a complex software package. What we have here is not a hack as we know it with the GH2, where encryption was broken and existing parameters simply changed from within. We have a bespoke firmware for advanced filmmakers and photographers.

Without any inside knowledge they have taken an existing product aimed towards a wide audience and improved on it to make it more tailored to the needs of advanced creatives and pros. Sales of the 5D Mark III will go up as a result, but the Magic Lantern team probably won’t see a cent of it unfortunately. I hope this can change.

In the 1970’s Pink Floyd were locked in a room for years experimenting, shaping and discovering as they went along a completely new sound, the sound that would later shape Dark Side of The Moon. I think young cinematographers are doing the same with raw on the 5D Mark III and Blackmagic Cinema Camera, shaping their ‘feel’ to images and with it filmmaking itself.

But whilst the soundscapes were taking shape someone keeps shouting at the band as they play – “but what about the lyrics!? That’s all that matters!!”

I’m seeing this more and more and very rarely does a leap in image quality go by – be it Red, full frame, raw, 4K or even laser projection without the cry of “none of it matters”. This is ridiculous of course it matters.

Without technological progress we’d all be shooting only in black and white. Technology broadens your creative scope. Black and white is beautiful but sometimes it isn’t what you want to shoot with.

There’s too much emphasis on storytelling as the be all and end all of filmmaking. Again the music analogy holds up. Many songs have lyrics but instrumentals and orchestral scores are still emotionally charged without any. Furthermore some of the best lyrics aren’t narrative, they’re allegorical, and the same goes for films.

There’s not one aspect of a film that matters most, everything does. A good story is unconvincing without great actors. Great acting is let down if the cinematography doesn’t also convey the same strength of feeling. Good writing cannot hide poor audio and bad music cannot ascend to the realms of greatness simply by adding better lyrics. Everything matters. Everything. It is not possible to appreciate one aspect in isolation if it is not in isolation!

4K is only one of 15 things that makes up a cinematic looking image and Arri recently said they’re holding off on a 4K update to the Alexa as 2K upscales so brilliantly. So it does – I’ve seen this done on prototype Sony hardware and it works amazingly.

However, to hold back advancing one of those ingredients because of the current status quo is a poor future product strategy.

Steve Jobs (and his quotes seem to be very much en vogue at the moment, like a mythical deity of some kind rather than the creative and acute businessman he was) used a sporting analogy in that he always tried to move ahead to where the ball was going rather than follow where it has just been, the claim being he was able to catch the zeitgeist ahead of his rivals. Apple certainly did that under Steve Jobs, and comforting though it is to think the tools you have now will be cutting edge for years, one day the 2K Alexa will be tired and old and obsolete.

Hopefully raw on the 5D Mark III will be embraced by pros and will give Canon pause for thought on how conservatively they have pushed their technology recently.

Always go to where the ball is going.

Right now the ball is in raw’s court.