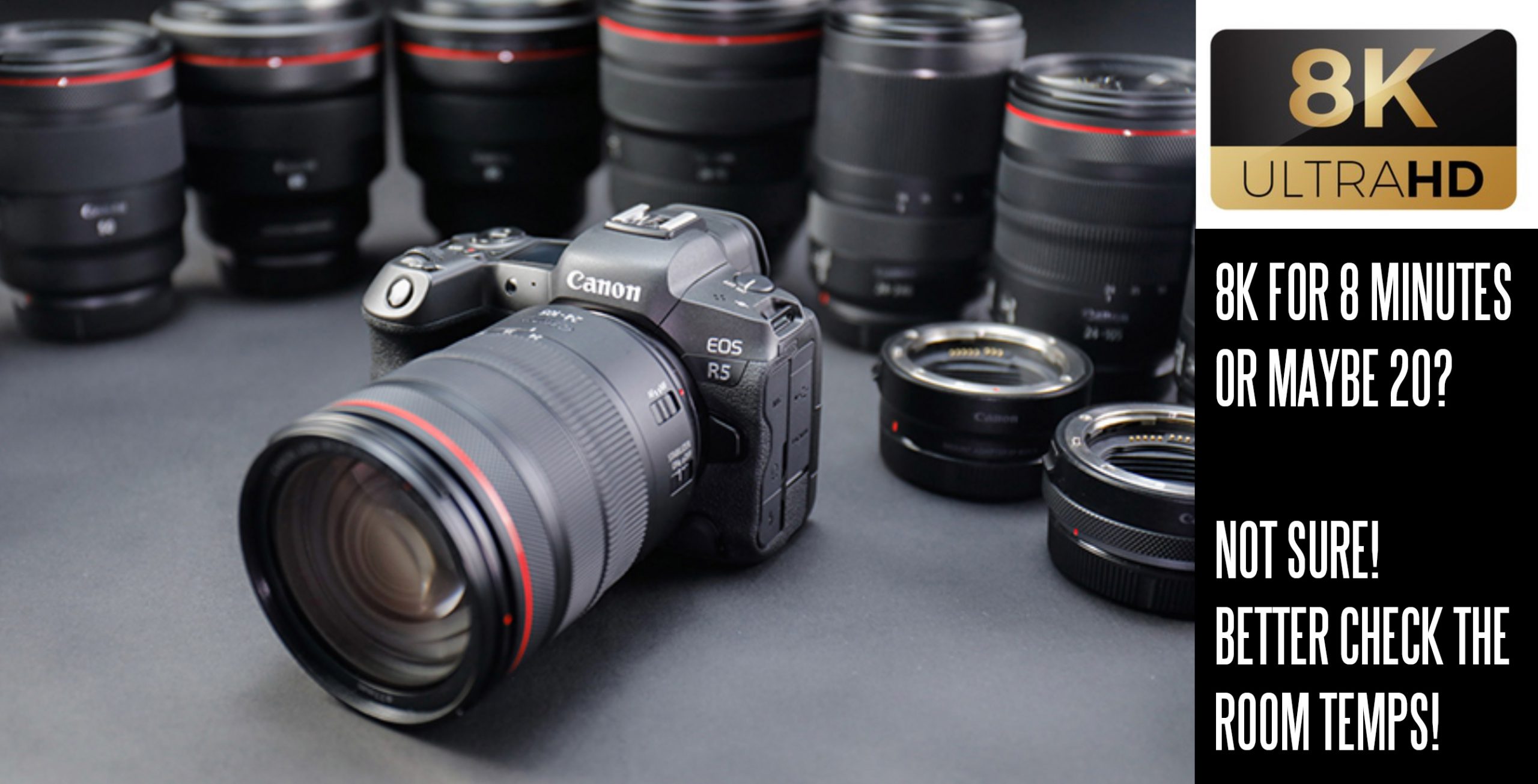 Let me be clear, it is great Canon thinks video users are important again. Well done Canon for such a comprehensive set of features. Now, as you may have seen earlier, Canon quietly sent EOS R5 overheating test results and timings to UK dealer CVP, who were the only ones to actually mention it in a video.

Here is the new list of approximate recording time limits (at 23 degrees C):

Thanks Jake Ratcliffe for the heads-up on this latest chart.

So as you can see, the 4K/120p mode is now included in the latest timings. We see it’s one of the “hottest” modes which will contribute to the camera shutting down quite quickly.

Even Canon’s own ambassador Peter McKinnon mentioned it. “If you’re shooting a lot of 4K/120p, sometimes the camera starts to overheat” he said before swiftly adding a positive spin “but we’re talking a mirrorless camera here, this is very small, 8K in such a small package!”

“But it makes sense it overheats!”

Nothing about it makes any sense whatsoever.

I’d rather it didn’t have 8K at all and actually worked properly.

I’d rather that the highest quality 4K modes didn’t cause reliability issues.

Here are the filmmaking scenarios under which these time limits become an issue:

Documentaries are heavily edited in their final form but in most cases source material rolls on for a while to get the needed coverage and information. With any situation where you don’t control what happens – you don’t know what you might miss if you keep having to stop recording.

Touring a location or filming inside a factory for example, it’s better to keep the camera rolling for the duration of the visit. Coverage is very important because your second operator might be shooting with a camera that doesn’t have a record time limit. If a cut of that footage is used in the final edit but has a temporary hole in coverage or an audio issue which needs to be filled by the other camera – that camera cannot be idle at that moment. This is a complete showstopper. So I just wouldn’t risk the EOS R5 for documentary work.

Narrative filmmaking, even on controlled sets needs a predictable run-time – be it 12 minutes, 30 minutes or longer. Of course the finished cut is heavily edited but very often when a take needs to be restarted the actors go straight away and the camera keeps rolling. Even on an amateur student short film this is the case. You can’t interrupt somebody’s creative flow just to save an unreliable camera from overheating, especially when you don’t know when the limit kicks in.

Dialogues, speeches, long continuous movements – even if these are edited to fit a short 5 minute scene in the finished film, the actual take could be made multiple times on the trot. Take for example just 3 takes and a couple of short discussions with the director in-between – that is 20 or 30 minutes easily breached on the EOS R5.

When this happens you may as well pack up and go home because the camera doesn’t instantly recover ready to go for another 20 minutes. The previous take could also have to be restarted completely because it got cut off by the camera.

Once the EOS R5 is ready to go again after the first overheating warning, run-times get shorter and shorter, and even more unpredictable in length. A 3 minute cut off after a resting period of 10 minutes for 8K recording is basically impossible to workaround as it could make it impossible to shoot the next scene.

Spec commercial work, corporate videos and advertising isn’t my area of filmmaking but they are an important source of income for many videographers.

Imagine telling a client the shoot has to wait 30 minutes for the camera to cool? How are they going to react? That just seems unprofessional to me.

YouTube channels feature long monologues quite frequently – product review videos for example. I would find a variable limit of under 30 minutes to be a real hinderance. It interrupts the flow but more than that – how can you be sure you’re not risking the entire take?

If it ends early, you might not even notice and may keep talking because you’re in front of the camera and not operating it.

When speaking to the camera on your one-man show you are not always concentrating on when a recording-length limit might happen especially if it is VARIABLE and unpredictable.

Something that could happen at 10 minutes, 15, 20, who knows? What is the ambient temperature?!

It’s been suggested that multiple cameras will make it easier to justify using the EOS R5 for important work. If it stops recording, you still have the other two – right?

It actually doesn’t make things easier. Multiple cameras and wider coverage of a scene makes an edit more complex and if you keep having to stop and start all the cameras even for short breaks in shooting because one can’t cope being left rolling – it’s an added distraction. Most actors and directors even on smaller films tend to work quickly and time is money. When the clapperboard comes down again for the next take, to sync each camera, they all need to be up and running and if one fails, it limits your choice in the edit.

Imagine for example a more complicated shoot where the EOS R5 is painstakingly set up as a crash cam on a vehicle, then the operator hits record and goes off to set up the next camera ready for the stunt to start. It could have to roll for 10 minutes doing nothing whilst other things are set-up and timed. You cannot babysit a broken camera or make sure it is the last to be turned on!

It may not be easy to access the camera at the last moment before a sequence – for example because the vehicle may be moving and the camera has no hands-on operator.

When it comes to interviews it goes without saying that 20 or 30 minutes followed by continuous recordings capped at 3 or 10 minutes doesn’t allow you to get the job done.

This rules out quite a lot of documentary and YouTube work featuring interviews.

If you look at some of the Netflix documentaries as an example – Tiger King for instance – again it’s heavily edited but those interviews are pulled from very long continuous recordings of dialogue and intimate monologues, where nothing could be missed. Hours and hours of source footage!

The Panasonic S1H is Netflix approved, but I just cannot see how the EOS R5 could be. It isn’t just the 8K that has the limits – the 4K does too!

The problems here are less than with other types of shoot, but we don’t know how the EOS R5 performs when rolling for 5 minutes, followed by a short break and then another 5 minutes. Eventually it adds up to 20 or 30 minutes doesn’t it!

If the overheating warning kicks in eventually after an hour of starting and stopping, then even the most basic music video style of recording the artist playing the entire track becomes a risk. With multiple takes and camera angles on different musicians, the risk multiplies. Using the EOS R5 could be a risk especially if the band wants something more audacious like a narrative short video or abstract film for a music video.

The EOS R5 as a B-camera for Cinema EOS C300 III wouldn’t be up to the task because if it stopped recording and needed to be started again, it’d break sync with the A-cam in the middle of the take, causing extra work for the editor.

Again where you don’t control the timing of events it is common practice to leave the camera rolling. If you take the approach of starting and stopping for short bursts of action, you tend to miss the build up sequence or the start of the action. This does not just apply to the highest level of nature documentaries like the BBC’s Planet Earth (which of course the Canon EOS R5 isn’t really aimed at) – the same applies to amateur nature filmmakers as well. Then there’s the weather factor to think about because of how it changes the predictability and dependability of the camera. You may think the camera only has a few minutes remaining but it could go for longer in the cold. In the heat, it could go for less so it’s hard to know just how long you have to get the all important shot – that sometimes could be a good 2 hours coming!

When the EOS R5 reaches peak cut off temperature, a quick look at the recovery times makes for sobering reading. Even after 20 minutes completely switched off, the EOS R5 records for a much shorter time afterwards. 10 minutes in 8K – half of the time it took to reach the first cut off.

The 23 degrees Celsius ambient room temperature under which Canon conducted the testing is not even that hot! It isn’t uncommon to use a camera in 30 degrees heat in the summer. Furthermore the impact of direct sunlight on a black camera body has to be taken into account. Even if the ambient temperature isn’t more than 23 degrees, the temperature of the camera under direct sunlight could be much higher.

And if the shoot is a hot one (28+ degrees c) you’ve basically got no chance of professional level reliability and interruption free shooting.

Right now, 8K and highest quality 4K “HQ” modes of the EOS R5 come with a major dealbreaker for a vast number of the EOS R5’s customers.

You will notice that “4K 30p” on the list above is a pixel binned mode, with the drop in image quality that gives you compared to oversampled 4K. So for longer recordings in 4K mode that could be a solution – but why buy a £4000 8K camera only to shoot pixel binned 4K?

The last interesting Canon EOS stills camera for filmmakers was 8 years ago with the 1D C. So it’s been a long wait during which time Canon have always said reliability is key. Indeed it was one of the primary reasons why we had conservative specs even since… a crop in 4K for example, and MJPEG codecs. Quite righty Canon were criticised for this.

Now it appears we have the opposite problem. We are blessed with 8K, no crop 4K and more. Some people expect critics like me to applaud this and ignore the fact you can’t get through a shoot any more.

If Canon does not have the technology to make a reliable 8K or 45 megapixel 4K camera, something has to give and it shouldn’t be reliability.

It should be the 8K badge on the box for marketing purposes that goes in the bin. Much as I like amazing technology features – they have to work.

So I don’t really appreciate this u-turn from Canon on reliability. Claiming to make a professional tool that will get through a shoot but then delivering something that’s a complete liability on one!

Just like with the Leica SL2 battery problem, the “yes men” who surround Canon to further their own careers in my opinion clearly have a lot to answer for. These people clearly haven’t given firm enough feedback to Canon. These ambassadors and professional users just did nothing to flag it as a major issue. Otherwise Canon would have listened and we wouldn’t be in this situation.

It is time this stopped. I am fed up of spending £4000 or even £6000 on a professional camera for it to have such show-stopping issues.