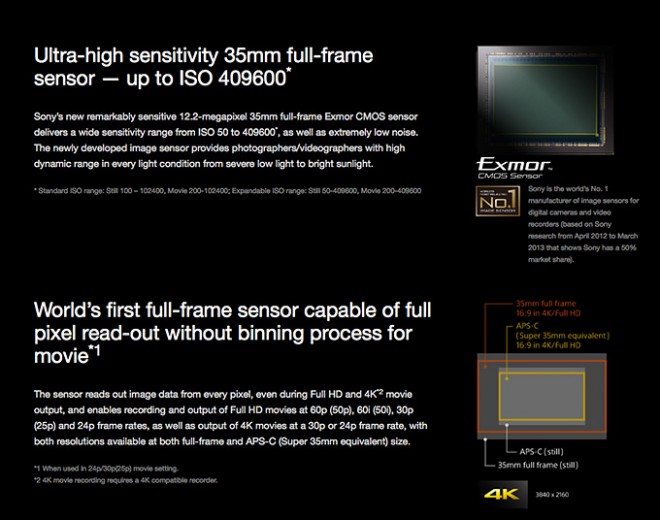 One of the enigmas emerging from the A7S is whether you can shoot 4K in APS-C crop mode as well. APS-C is Super 35mm in cinema language. I really would like to use my Cooke S4i Minis via a PL adapter on this camera! Taking advantage of the low light sensitivity. APS-C crop mode would also allow the use of standard Sony E-mount / NEX lenses, Canon EF-S and Nikon DX lenses.

Sony’s information (above) implies that is the case with “both resolutions available at both full frame and APS-C size”.

I dug a little deeper to find out more… 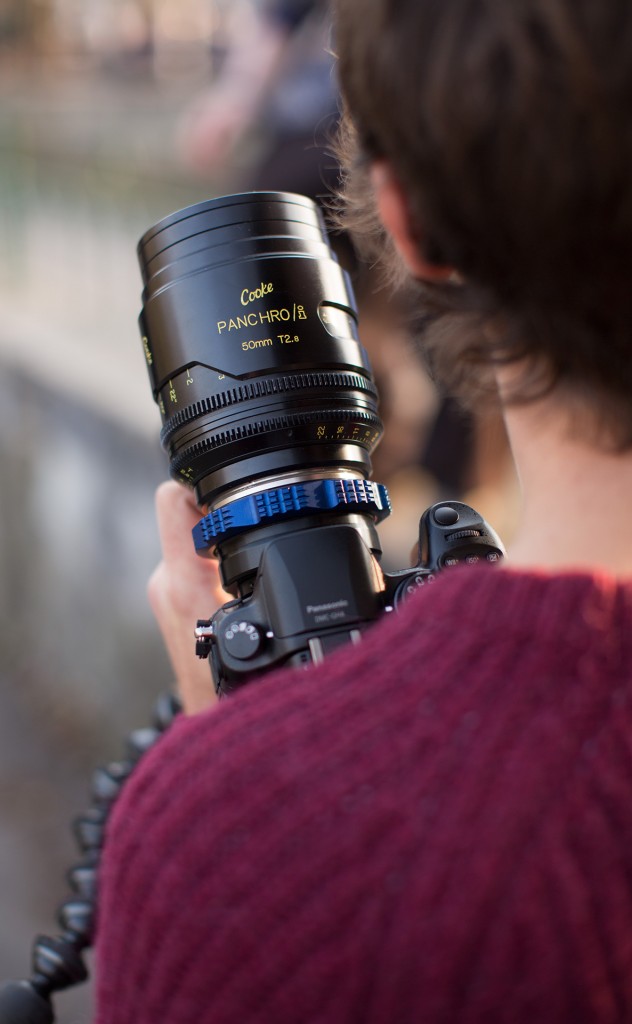 That horizontal resolution in 4K is exactly 400 pixels less wide than the full frame sensor resolution.

The camera firmware is not final yet so it is not yet known whether the camera will apply a small crop to get from 4240 to 3840 or will actually apply some scaling on the image processor to downsample the full sensor readout. Something I’d like to see on this camera is 4096 x 2160 for the Cinema 4K standard like on the GH4. Strange that Sony have not put this in as it is definitely within the existing spec.

Sony say no binning is used by the sensor for video on the A7S in either 4K or 1080p modes. That implies the sensor scans at maximum resolution or close to it and that the binning for 1080p is done on the image processor, like on the RX10.

In APS-C mode I’m expecting the 4K image to be softer than in full frame mode because it’s actually a physical impossibility to get true 4K from a APS-C crop of the 12MP sensor. Sony give the resolution in this mode as 2768 x 1848 (that’s for stills shot with standard E-mount APS-C lenses).

That means 4K in APS-C mode is actually upscaled 2.7k.

This is still going to make for a nice image and a step up from the internal 1080p. I’m expecting it to be close to the Super 35mm mode of the 1D C when downscaled in post to 1080p like on that camera, so will make for sharp 2K at least!

The quality of the internal XAVC-S 1080p depends of course on how Sony do the binning on the image processor from 4K to 2K. A similar Bionz X image processor is used in the RX10. This takes a huge 20MP sensor readout to just 1080p (2 megapixel). The result was actually a very sharp image but it didn’t eliminate all moire and aliasing. Still quite a bit resulted.

The XAVC-S mode might be useful for slow-mo because in this mode you can shoot 1080/60p. It’s likely the sensor can output the full 4.2K image at 60fps because its more recent technology than the Canon sensor in the 1D C. In fact the Aptina sensor in the much cheaper Nikon V2 and V3 already did so at even higher resolutions than 12MP. 14MP on the V2 and 18MP on the V3! On the Canon 1D C 1080/60p in full frame was a lot softer than 1080/24p and of course softer still compared to the 1:1 crop Super 35mm crop mode. Why that was is likely down to binning on the sensor. If you bin on the image processor you can do a more optimised job of it.

What about dynamic range?

As for dynamic range the final spec has not yet been released by Sony as they are still fine tuning it.

In theory with a lower megapixel count you can have larger pixel wells which fill up with more light, resulting in more dynamic range. The 24MP A7 sensor already has close to 14 stops, leaving the Canon 5D Mark III trailing by 2 stops. If the A7S has more due to the larger pixels we could be in for an astonishing 16 stops best case. At minimum I am expecting the camera to cope with scenes lit for at least 14 stops in terms of 4K video, though this will be heavily dependant on the picture profile used on the camera.

This range will be  baked into the image compared to raw but that is the case with JPEG stills from the A7 as well, and if you compare dynamic range JPEG to raw on these cameras you still see a lot of the sensor’s native dynamic range in those images. What you will lack is the ability to really shift it around in post as much as with raw, though SLOG 2 will help, that will sacrifice other aspects like colour and how fine gradation is in shadows and highlights.

So that’s the science bit over… the most important thing are the images and in this respect I think the A7S has the potential to deliver a small miracle.