The first retro-styled camera from Panasonic is the first ever compact to shoot 4K video from a large sensor. The first compact that I would call “exceptional” in almost every respect.

The Panasonic LX100 costs $899 and is available now. You can find it at B&H here and brand new on eBay here. 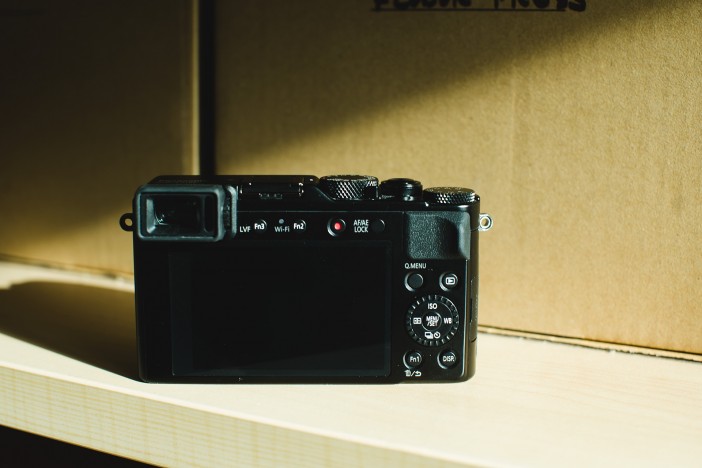 The attraction of the small camera for professional filmmakers at the moment is undeniable. They are being used all over the place, for scoping out angles, stealing some b-camera shots, putting in tight spots, rigging to drones and as POV action cameras they are not just desirable but necessary tools to get the job done. Last week, I sold one of my GH4 guides to a well known cinematographer looking to make it his go-to small camera. Clearly Panasonic are doing something right! Likewise I think the LX100 is going to get some serious use on sets where the Blackmagic Pocket Cinema Camera cannot suffice or when 4K is required.

There’s a huge number of things I like about this camera. Let’s start with a summary.

Panasonic have practically managed to fit an entire GH4 in a pocket camera. Practically identical sensor, same 4K codec at 100Mbit/s with 24p and 30p, or 24/25p on the PAL model. EVF from the GX7 and build quality is stunning. It feels like a block of aluminium, more like a Leica than a Lumix.

That lens – it’s utterly astounding. The Leica is especially good at the wide end, where you’re effectively being given a premium 11mm F1.7 Micro Four Thirds prime with a macro focus distance of 3cm including 5 axis OIS. For $899. With the camera. The margin on $899 must be absolutely tiny for Panasonic, so huge kudos for letting your engineers off the hook on this one. The zoom from 24-75mm (equiv.) is a bonus, only slowing to F2.8 at the long end. Distortion is practically zero and sharpness is superb even wide open.

Video and stills quality are so similar to the GH4 it barely needs analysing in depth. This is the best video quality per size-of-camera in the world right now.

Not a single core image processor, not dual core, but the exact same quad-core processor as the GH4, somehow packed into a much smaller space without overheating. It gets a little warm but rarely breaks into a sweat.

The battery life – it’s extraordinary for a compact shooting 4K with such a powerful processor.

Super fast AF with 49 points. Much more responsive than my other favourite compact for stills, the Sony RX1 for street photography and spontaneous stuff. Tons of manual controls. The manual focus ring is buttery smooth and responsive. Aperture is on a clicking dial on the lens. Even aspect ratio is on the lens! The mechanical shutter is near-silent. No more artefacts from using an e-shutter for silent shooting.

It’s very light. You can put it in a jacket pocket and forget it is there, just like an iPhone. Keep it with you and never shoot in crappy iPhone-o-vision again.

The WiFi feed off this camera to an iPhone 6+ for wireless monitoring is gloriously detailed and smooth. When you have the camera rigged in a hard to reach place or need to control everything remotely, including focus and zoom you don’t need to go near the camera. This will be great for crash-cams, drones close to the operator, vehicle rigs and POV shots. It’s also incredibly light. Perfect for aerial work where you need greater sensitivity, greater dynamic range and a better lens than the GoPro Hero 4 Black Edition. I’ve briefly tested the range and it worked fine in a different room of the house separated by thick walls. No router is required, it does a direct link. 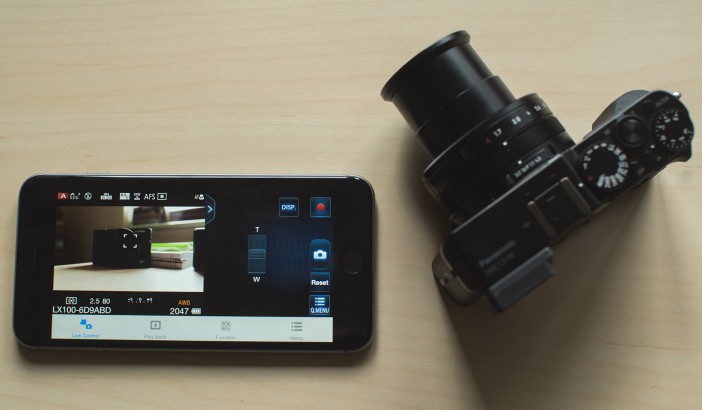 The LX100’s lovely retro-style design draws on Panasonic’s growing heritage in digital cameras. It has a dash of Fuji X series about it, but consciously harks back to the Panasonic LC1 designed over 10 years ago by Yoshiyuki Inoue and his team. Inoue is now senior engineering planner for the GH4 and other micro four thirds cameras (see the EOSHD interview here).

It blows the competition out of the water. The LX100 is seriously small considering the size of the sensor, the specification of the lens and the fact that somehow after all of that they found room for such a large EVF. It feels like a real labour of love by Panasonic. By comparison the Canon G1 X Mark II looks and feels like it was sketched on the back of an envelope by an accountant at Canon, and a very jaded one at that. Feel how clunky the button layout is, with a WiFi / share button shoehorned into such a prominent position. Look at how the screen extends on that cheap metal hinge and how ugly it looks. Compare the size. It’s enormous compared to the LX100. The G16 is a lovely classic design by Canon, the G1 X Mark II should have been that, with a large sensor in it.

The Sony RX100 and RX1 were wonderful but Panasonic have upped the game considerably. The Sony RX100 III previously a favourite of mine is innovative but the LX100 has a better sensor, larger sensor, better lens, cleaner low light performance, 4K video, much better EVF, nicer styling, handling, build quality and ergonomics… It would be quicker to just say everything is better aside from resolution for stills. I’d rather have the cleaner images.

Compared to the RX1, of course that camera is alone in being a jacket pocketable full frame camera with Zeiss 35mm F2 prime on the front, but the LX100 shoots video in a different league and has a much more versatile feature set for stills, as well as doubly fast AF. It’s also far far cheaper.

“A camera will not make you shoot better images” – I’ve heard it said maybe 10 times maybe more, but it isn’t true. The LX100 has allowed me to shoot better images because unlike a large camera it’s always there. I can throw it in my pocket then bring it out at any moment during the shoot when I need an extra angle. I can rig it pretty much anywhere or just use it handheld. The coverage you get from the LX100 is almost iPhone-like in its omnipresence. But above all, I’m just happy with the results. 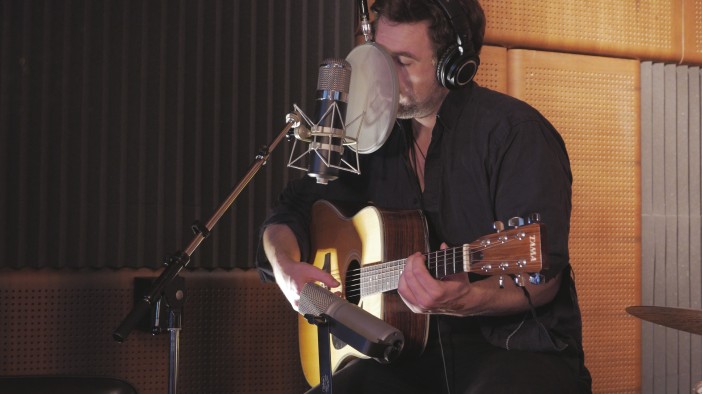 Here’s a behind the scene shot of the very fine Josefine on violin. The foreground camera is the A7S and the LX100 is top left on the mic stand!

On my last shoot, the LX100 came in useful for rigging to a mic stand during the recording of Her, a song by the Berlin band Bunny Suit. An RX100 or a GoPro would not have intercut in the edit. This did.

In fact it soon became an A-camera when I discovered the macro performance of the lens at 11mm and I needed some detailed 4K close-up shots, which you can see continuously for the first 40 seconds of the video above.

All the ambient shots were done in 4K including the close up of the singer Cameron’s eye you see in the Vimeo poster frame… the rest is all full frame 1080p, Sony A7S, Nikon D750 and a few more 4K LX100 shots. It intercuts with the best full frame video cameras because 4K makes for excellent quality 1080p and the Leica lens on the LX100 really does elevate it beyond a mere compact camera to something more. 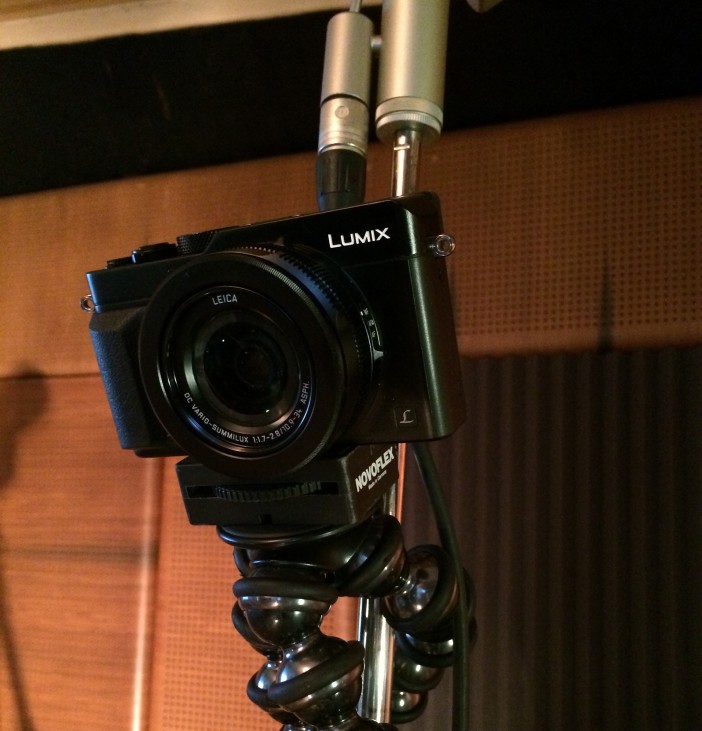 As you can see above the lens retracts when it is switched off in-between takes. One feature I liked was to enable zoom-resume so that if I powered off to save the battery during lengthy downtime on a shoot, the zoom would extend to the same framing when I returned and I wouldn’t have to reframe the shot. Vital for consistency when using a camera like this.

The advantage of this is that the corners are sharper and the image actually grows wider or taller with the selected aspect ratio. You capture more edge to edge in 16:9, but more top to bottom in 4:3.

This encourages you to select the aspect ratio to suit the shot and the setting is instantly accessible via a lever on top of the lens, as per the LX series tradition.

The end results are a 2.4x crop in 4K video mode compared to 2.3x crop on the GH4. In stills mode it is a 2.2x crop compared to 2.0x on the GH4. This compares to a 1.5x crop for Super 35mm, so it is in the right ballpark. No it isn’t full frame by any means, but the lens is 10.9mm at the wide end which means you maintain a nice wide 24mm field of view equivalent to full frame in stills mode and 26mm in 4K mode. With the FZ1000 you lose the wide end altogether in 4K mode.

Panasonic market the LX100 as having a 1.33″ sensor, drawing comparisons with 1″ compacts like the Canon GX7 and Sony RX100 III. They have a crop closer to 3x, or Super 16mm in cinema terms. Neither the GX7 or RX100 III record 4K video and both are much worse in low light due to an excessive megapixel count of 20MP spread over a smaller sensor.

Although the full sensor in the LX100 is 16MP as with the GH4, the number of pixels covering the actual recording area works out at a maximum of 12MP for stills, 8MP in 4K mode. Low light performance is class leading for a compact, although like the GH4 it cannot compete with a full frame camera at ISO 3200 & above.

With the shutter dial replacing the mode dial, there’s no dedicated creative movie mode like on the GH4 and unfortunately Panasonic have culled some features unnecessarily like CineLikeD. I found it preferable to just set the picture profile to Standard with the auto-white balance moved across to the warmer end of the colour adjustment grid. Dialling Neutral completely flat brings out some rather odd issues with colour science. Stay away from the Vivid profile too as it really hurts skin tones, giving them a pink magenta tint or a yellow cast depending on what the white balance is set to. 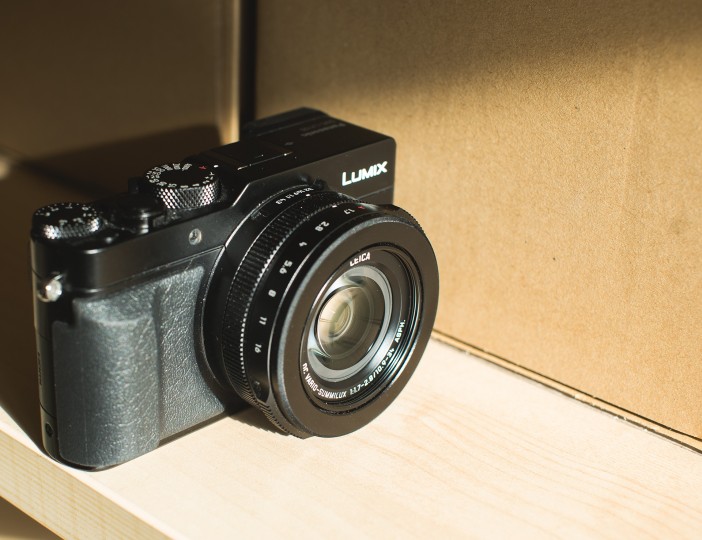 Without the dedicated movie mode, live-view framing for video is at the mercy of your stills settings. If for example you have 3:2 set for stills and hit record, the image will only then crop to the correct 16:9 frame. The way around this is pretty perverse. You enable 4K Photo Mode which gives the correct framing for 4K video in 16:9 at all times in live-view. So here is yet another camera like the A7S where it’s better to shoot video in a stills mode! In this mode you can also shoot 4:3 which gives a higher vertical resolution and a more desirable aspect ratio for anamorphic shooting. I’ve assigned 4K Photo Mode to a function button so I can toggle it on and off like a movie mode. When it is enabled you have the option of starting movie recording with the main shutter button too, which is more conveniently positioned than the video record button.

There’s no slow-mo mode despite the LX7 and GH4 having that and no live-HDMI output. You do get 1080/60p for some mild slow mo though not the 96fps of the GH4.

You can have auto-ISO with everything else set to manual which is good though and setting the camera to full auto (iAuto mode) is done with a single press of the iA button.

Stay tuned for the full review

The LX100 deserves to be known as a ‘classic’. It takes what Sony started with the RX100 and turns everything up several notches. It really is a shrunk down GH4, a high end mirrorless camera with Leica lens but in your pocket, with a very high build quality for $899 / £699.

The LX100 is out now. You can find it at B&H here and brand new on eBay here.