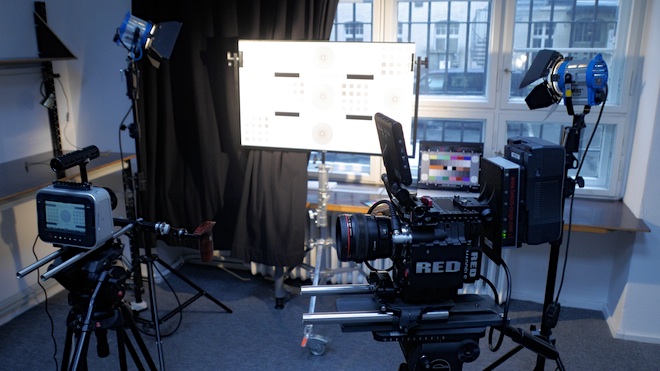 How does the Blackmagic Cinema Camera compare to an established film industry standard, the Red Epic?

Along with ReWo and MBF Filmtechnik in Berlin we decided to find out.

Although a very short test this was an eye opener in so many ways not least of all because of the low price of the Blackmagic and how good the image on that, but I actually quite nearly fell in love with the Epic.

This was my first time handling Red Raw and I have to say Graeme Nattress and company did a superb job on the workflow and REDCINE X PRO.

The Epic, though far higher priced and higher specced than the Blackmagic Cinema Camera is an option for indie filmmakers who are comfortable renting.

In the test the cage on the Blackmagic Cinema Camera is this one by ReWo. It is very low profile and doesn’t add any bulk because it fits around the EF mount of the camera rather ingeniously. For the Micro Four Thirds version ReWo have planned a set of lens adapters (for example for PL) which the cage clamps around. 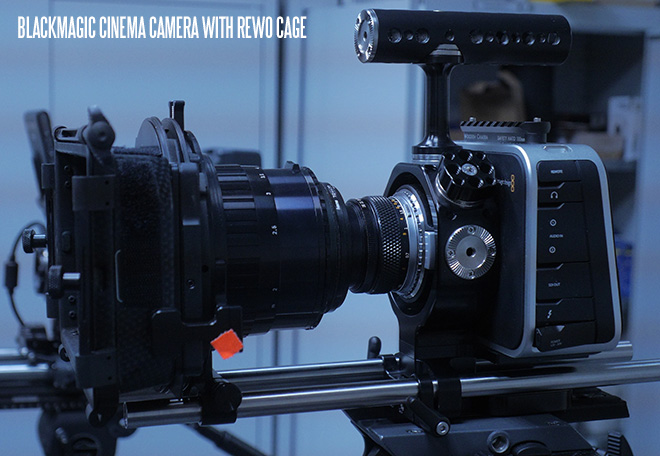 To test low light performance we shot a chart 3 stops under and brought the Epic up to the equivalent of ISO 6400 in REDCINE X PRO. I left the luma curve linear and the rest of the settings on default, then did the same with the Blackmagic in Resolve to match the new exposure on the Epic’s 4K raw footage. The BMCC was recording 2.5K Cinema DNG raw.

I was surprised how far I had to bring the ISO up on the Red footage from 3 stops under relative to the Blackmagic Cinema Camera, because I am pretty sure ISO 1600 is the limit on the BMCC before things start to get very noisy in the blacks. If this truly is what the camera looks like at “ISO 6400” next to the 6400 exposure on an Epic then I’d say the low light performance of the Blackmagic is astounding for that level of ISO on a smaller sensor. Sure the blacks are nosier and there’s a slight crushing going on (see the curtain behind the chart for instance, more detail in the Epic) – it isn’t as good but the camera is $3000! 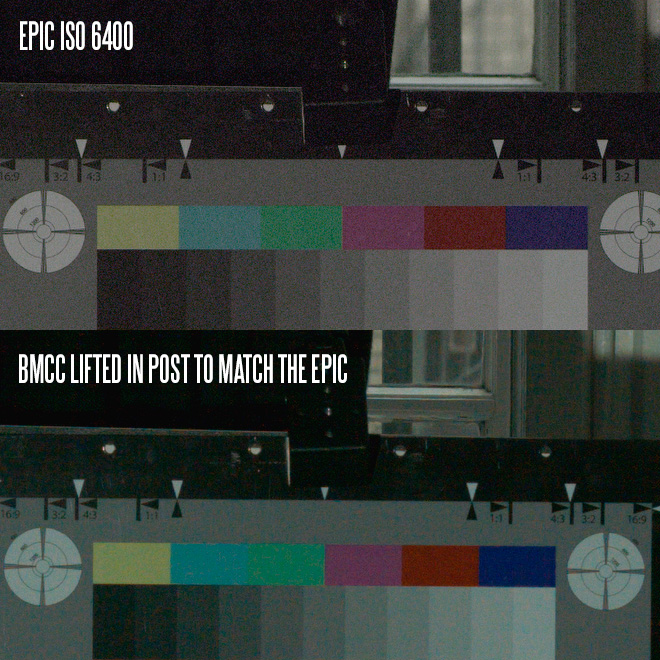 For reference here is the original exposure at the native ISO of 800 (taken from the Blackmagic setip) as we monitored it in Rec.709 range. 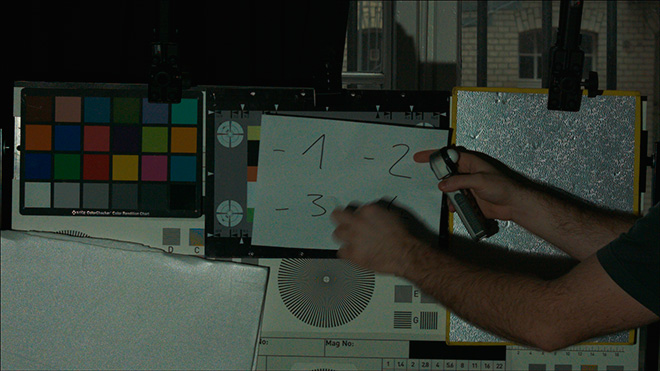 The noise grain of the Epic looks very fine when you downsample 5K or 4K to 1080p like for the comparison below, but at 1:1 on the original footage it isn’t as fine and looks more digital. 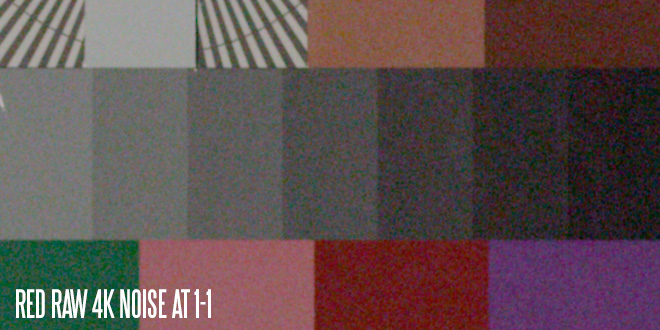 Whether the audience will notice – I doubt it.

You can also play with the noise in post and get it to look finer or more organic. You can even do this with DSLR footage by overlaying moving scans of film grain.

Something I would like to see handled better by DaVinci Resolve is the Cinema DNG raw metadata for ISO. At the moment we have a slider with a number from 0.00.

Where’s the ISO slider in Resolve like in REDCINE X PRO? For me, ASA and ISO is more of a film standard than any slider.

Overall these two cameras do a better job with the way they handle noise and grain relative to the Sony FS100 and DSLRs. I much prefer the fine monochrome grain to big red and green blotches you get with heavily compressed codecs. You only get a lot of red, blue and green / chroma noise on the Epic and Blackmagic when really lift the blacks insanely high in post. It is best to shoot with as much light as possible and overexpose if you want less noise. Overexposing with a DSLR or the FS100 isn’t possible because the highlights clip so soon.

Raw on the Epic and Scarlet is actually compressed raw and Cinema DNG is uncompressed. This makes the Red format more practical than Cinema DNG and you can edit on less powerful hardware, despite it supporting 4K and 5K – and soon 6K with the new Dragon sensor. We shot the test with low compression (3:1) and the frame sizes of 4K where competitive with the Blackmagic DNGs, despite that extra resolution.

You can choose various compression ratios on the camera.

No matter the acquisition format and what compression level you shot with REDCINE X PRO is very scalable depending on your hardware. The playback quality setting is invaluable for speed of use or where you just want to get the edit done on a laptop. You can playback Red Raw on a $1000 2nd hand MacBook Pro no problem which is amazing considering you are dealing directly with 4K raw. You can of course edit by proxy in Premiere or Final Cut Pro too. 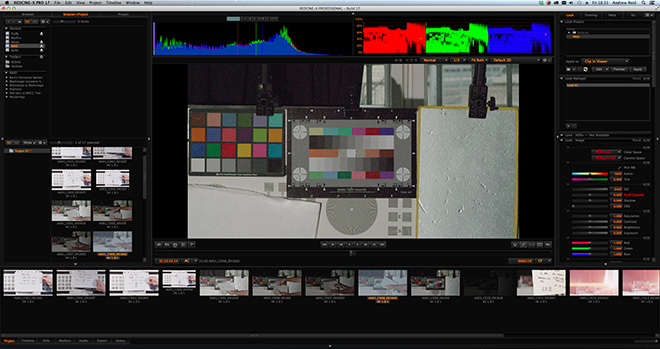 I also prefer aspects of the software design to DaVinci Resolve. I actually rate Resolve highly but some things drive me a bit crazy with it.

Grading and playback of 4K Epic footage in Resolve was unworkable despite pretty decent workstation hardware specifications. I could gain no more than 2fps playback of 4K compared to in real time 24p for Cinema DNG, and I couldn’t find the setting to playback at lower than 4K quality or lower the debayer quality like in RED CINE X. If it is there, then the obscurity of the setting is a major design fault. If it isn’t there, then…well… You’re a bit screwed!

Thankfully REDCINE X PRO is free to download for those needing to handle RED footage – but it doesn’t handle Cinema DNG, nor can you transcode another format to RED Raw.

Although SSD media for the Epic is far more expensive than for the Blackmagic, the media is more reliable and built to last. I am a bit worried that the SSD for my Blackmagic Cinema Camera won’t last the year. Certainly for very regular shooters the fact that normal off the shelf SSDs cannot be wiped and filled thousands of times like Red media can, could be a problem in months to come.

I think Blackmagic should look at introducing some high end SSD media for their camera.

Like the Scarlet, the Epic is more compact than most people expect. It’s almost as small as the Blackmagic Cinema Camera – which is valuable for my kind of work where stealth and portability whilst travelling is a requirement.

The SSD bay is modular but very low profile and sits on the side of the camera. There’s a loud fan whilst on standby to keep the temperature down to the maximum, then the fan neatly goes into a quieter operating mode when you hit record so that it has a minimal impact on audio recording.

Adding a decent battery significantly bulks up both rigs, but ReWo have developed another solution for a very discrete small BMCC battery which I will cover in the review of their cage soon.

The LCD attachment for the Epic gets some stick but I mostly enjoyed it. It is a touch screen and a lot of the camera controls are on the screen not the camera body which is kept minimalist like the Blackmagic. The ergonomics are better with the Epic but it is still just a picture making box. This simplicity I like a lot. The touch screen could be more responsive though.

Most EVFs and monitors for DSLRs are clunky and have a big battery attached to the back. The Epic’s LCD just attaches via a bespoke cable, powered by the camera itself. It’s slim and nimble, with a built in hinge not a spidery arm. I only wish DSLR accessory manufacturers would take a hint from this approach and do a much smaller, lighter and more integrated articulated monitor. I have asked Steve Weiss at Zacuto to do this, let’s see if they can come up with something Red style.

The LCD panel itself is not the latest technology nor is the touch screen functionality that wonderful – I know the DPs behind ReWo were not big fans! – but the low profile integrated design (powered by cam, with single cable) is a nice feature for me. 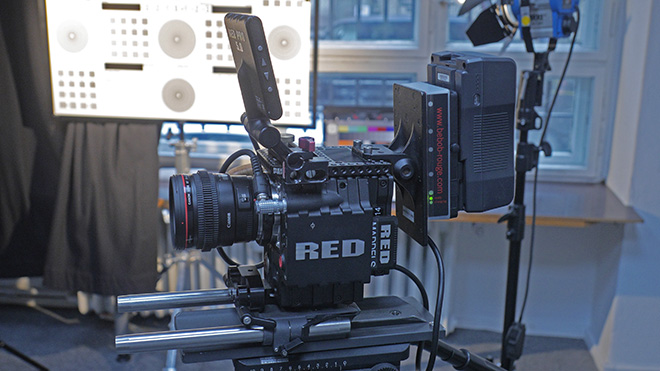 I will be covering the big stuff – dynamic range and resolution in part 2. I may make the raw video files available, but they are not exciting – just charts.

I feel the analysis is best kept to stills as you cannot really get a sense of what 2.5K raw and 4K raw is like from Vimeo.

As well as the resolution charts we also tested an Iscorama anamorphic on the Epic to see how the cameras react with flare. For me the lens still remains more important than the choice of camera.