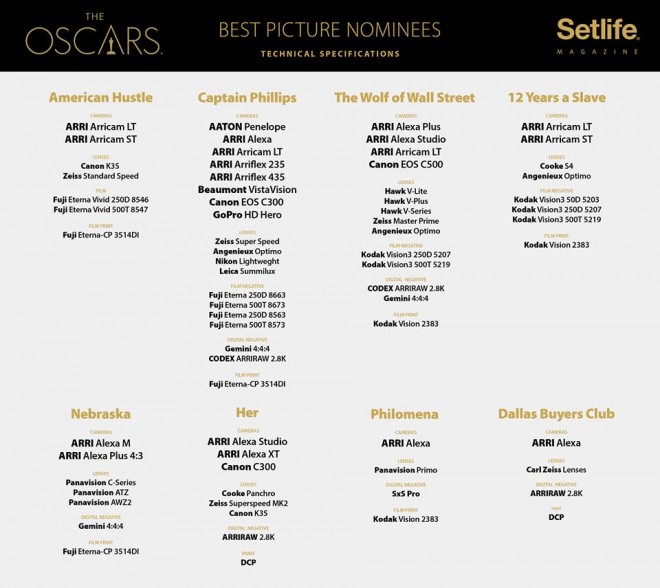 SetLife Magazine (a recommended follow on Facebook) has compiled technical specification slates showing us who shot on what when it comes to the big 2014 Oscar nominees.

Interestingly Arri cameras still sweep the board. There are also nods to the Cinema EOS cameras and even the GoPro, but the really surprising thing is not a single one of the films were shot on RED.

Of the films in the top two categories, 9 were shot on digital with the remaining 4 shot on film.

Paramount recently discontinued film as a distribution format but it remains quite popular as an acquisition format, for the time being.

Gravity used 65mm film and Hasselblad lenses alongside the Super 35mm Alexa whilst the Phantom Flex gets to flex its slow-mo muscle in The Grandmaster.

The Cinema EOS cameras are a notable success considering how under specced they are compared to competing cameras and that they are relatively new to the market, showing just how big an impact Canon made on professional filmmaking industry with DSLRs. The C300 was a pick for run & gun on Spike Jonze’s “Her” and Captain Philips. The 4K shooting C500 complimented the Alexa on Wolf of Wall Street, likely as a b-camera.

But what of the lack of RED cameras amongst the nominees? Is the Alexa now the ‘go-to’ camera for top-league filmmakers? I don’t have a theory as to what’s going on here and expected a better showing.