Anamorphic lenses won’t just couple up with anybody and need the right partner. They’re very fussy. I am of course talking about prime lenses.

For instance, you’d think that two attractive 50mm lenses would be equally as desirable for Lady Isco. One is a fast 50mm Zeiss and one a fast Canon FD with a cheap looking silver ring. Guess what the Isco went for – the Canon. Works much better. And they’re practically the same lens when used the normal way.

My Russian LOMO anamorphic is fussy as well. Amazing Zeiss Jena 35mm F2.4 was not her type. She got on much better with another 35mm lens, again a Canon FD. In fact the Lomo was fussiest of all. She is destined only to love 35mm lenses, she even has a tattoo saying as much.

I have yet another anamorphic lens, she is named Proskar. So I put her on a date with a few lenses to see which one she liked best.

Oh dear, it seems she doesn’t like dating Germans!

Eventually I managed to matchmake her with a Canon FD 50mm Macro, F3.5. With this lens, the Proskar is a lot sharper than on anything else I tried. A match made in heaven.

The Canon FD 50mm Macro came to my attention when it was very kindly gifted to me by an EOSHD.com reader (thanks Tony) and I love this lens… the macro side of it is fantastic and it’s quite frankly mind-blowing on the GH2’s crop mode, yet as a standard portrait lens it is also a bit of a stunner, with lovely creamy bokeh. He should never have given it away!!

I shot with it and Miss Proskar on the Panasonic GH1 last week before my GH2 arrived. Whilst it’s a bit softer in the corners than my Isco and like the Kowa Prominar needs to focus in sync with the main camera lens, I was really happy with the results.

Flare, although not in evidence in the video, is also pretty good. I’ll do a flare example video later.

Now anamorphic lenses like this present a challenge. The Proskar has a funny thread which is M42 – the same as the SLR camera mount. That is an odd choice for something which screws onto the front of a lens not a camera body. Probably designed for projection systems…

It’s minimum focus distance is alright but as described here, you can dramatically improve the performance of an anamorphic by putting a high quality diopter on the front. 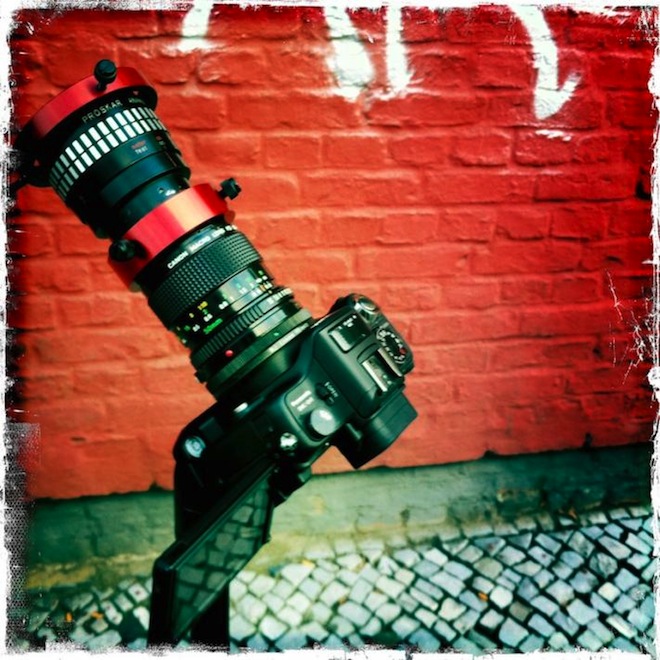 The rear clamp allows any anamorphic lens to attach to the camera prime lens without a stepping ring or thread adapter, and it has the added essential function of enabling the lens to be straightened up, since the anamorphic can be rotated in the clamp and then locked down with thumb screws.

The front clamp is for filters like diopters, NDs, even anti-moire filters. It puts a standard 72mm filter thread on the front of a lens that has none. Quite important really.

I have also used the clamp system on my heavy Lomo and it handled it brilliantly. At no point did I feel the need to check it, or worry about it loosening up. Very solid and it looks cool as well.

So enjoy the footage from my Proskar, soon to be your Proskar. I don’t need 3 anamorphic lenses and right now I have 5. So on eBay it goes! I don’t do this often, so snap it up whilst you can and be sure to pick up the clamp from Tony. The Proskar is not as good as my $2000 Isco Centavision (rare version), but sharper than the Lomo, although it vignettes more easily at wider angles. Stick it on a 50mm on the GH1, or 85mm on the Canon 60D, etc.

I was able to get a nice shallow DOF with it and focus as closely as my Isco when used with a diopter.

One final note – embedded Vimeo playback is looking more like standard definition at the moment. Please do download the full 1080p file and play it back on a nice screen or projection system at your leisure and it’ll look MUCH sharper and the colours will really pop.