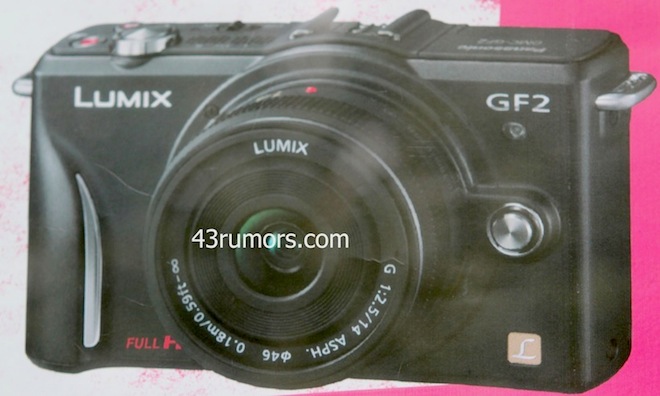 As predicted first by EOSHD on Twitter last week thanks to a tip off from a jolly good source, the GF2 is having a launch party this week.

The GF1 was a real cash cow for Panasonic, as was the high end compact (LX3). The GF1’s strong sales resulted in mirrorless going down market to cater for the high end compact users. What we really wanted was more of where the GH1 came from – pushing the format forward into the future. High end EVF, best ever seen. Cutting edge sensor. Full manual controls and great video. Hackable even!

Panasonic have so far managed to balance marketing demands with actual progress quite well, avoiding the NEX style disaster whereby a Playstation designer was let loose on a photographic tool, so that it appeals to non-photographers. It’s a little like building a car to appeal to the huge growing market of non-drivers. Plenty of money to be made there – just simplify it to the point where it’s useless as a car. Steering wheel? Who needs that?

I’m all for small cameras – one of the benefits of the GH1 has been it’s inconspicuous appearance, light weight and small size relative to the 7D, 5D Mark II and even 550D to a certain extent. For in video mode we don’t need a mirror.

The GF2 represents the smallest embodiment of a sensor and LCD, very much like the Sony NEX. Have Panasonic produced a better camera than the NEX or has simplicity gone too far? Here is a rolling update of what we know thus far about the GF2, which may well become the best-selling ‘2nd body’ for video DSLR shooters around the world.

So far we have a rumour and an actual photograph of the front of the GF2. It is sans mode dial on the top, presumably to get the thickness of the body down to an absolute minimum and to crunch up the width whilst maintaining room for the shutter release button, video record button and power switch – even a stereo mic! It could not have gone on the other side either, since that’s probably occupied by the pop-up flash. No EVF although it does have a hotshoe. It has full HD – says so on the front. Stereo mic is a good sign – maybe we’ll get unfettered video this time, manual controls p-leeeaaase.

So now what of the rumours? Apparently it uses the same sensor as the G2. Find it odd that the G2 never did full HD although even the GF1 could be hacked to do so. Apparently Panasonic wanted to keep full HD back for the GH2 so the G2 lacks it, but since the GF2 is more a 2nd body and compact replacement, full HD was a better fit for that since it doesn’t compete directly with the GH2 for sales.

How about some educated speculation? Touch screen – very probable since there is such limited room for physical controls and it’s a favourite at the marketing department. Flip out? Very doubtful unfortunately since the housing needed for the screen’s front and back makes it much thicker and room is needed for a hinge. This may be one area where the NEX has an advantage – it has a fold out screen – not swing out, but great nonetheless.

Give us a 16mm mirrorless with fast c-mount sized lenses!

The achilles heel of NEX and GF2 style cameras is their large sensor. At once, the large sensor makes the product and also destroys it. The simple fact is that it’s currently impossible to make a small zoom lens for a large sensor. There is very little point in having a pocketable ultra thin camera when the lens makes it the same size as anything else and not pocketable.

Shaving the thickness of the body back almost makes for a slightly bulky compact replacement that goes in coat pockets, but it’s still not ideal.

What we need is an aspherical sensor and razor thin optics, but those are some years off.

My girlfriend dumped her GF1 because she couldn’t give up a zoom lens. The 14-45mm is not very satisfying. The 14-140mm is perfect but then – look at the size of it. Much smaller than the Canon 5D Mark II equivalent would be but still not pocketable no matter what the size of the camera body.

In my opinion the sensor size needs to come down to 16mm or even lower, still enough DOF with fast lenses and telephoto but the lenses could be made as small as c-mount glass. Imagine a camera only just physically wider than the 16mm diagonal sensor (Micro 4/3rds is currently 18-19mm), 2.5 inch LCD covering the entire back, and tiny c-mount lens on the front. That would be pocketable!