At Photokina (Photokino for video users!) I briefly played with the Nikon D750.

With the camera tethered to a sales rep stand and so much else for filmmakers at the show like the Sony A7S, Panasonic GH4, Samsung NX1, Blackmagic and Red, I didn’t really have much time for the Canon or Nikon areas, but I did form some first impressions of using the new camera.

First the good news for Nikon fans. The D750 definitely has better video quality than the D610 and D600. Though that isn’t hard, video on those models was atrocious. Resolution has increased so that it looks a bit more like how 1080p should look and aliasing has been reduced. There’s still some there. I didn’t see any moire in my brief test though and on close-ups detail did pop off the screen nicely. It looks to be performing similar to the Nikon D5300. In the magnified focus assist in video mode I did see moire occur, but not in the magnified focus assist for stills. Whether it will occur on your recording I can’t yet say with any certainty but it’s definitely reduced over the D610. I imagine most consumer users who do the occasional movie clip will be satisfied with the D750 and how it looks when uploaded to Vimeo. Pros will be more likely to go with Sony or Panasonic.

Noise at ISO 3200 was kept reasonably well under control. Above that it is a long way of the Sony A7S, and it’s a shame Nikon do not have an answer to that with a low megapixel count body any more. The D700 was 12MP, the D750 is 24MP. That’s quite a leap.

For the Photokina footage I shot in 1080/50p mode on the PAL camera as that will give you the option for slow-mo and an easy conform to 25p. I rendered the Vimeo clip at 25p. There’s some natively shot 25p in there too at the end at ISO 3200. Detail at the higher frame rates looks higher when played back at 50fps because of the higher spatial resolution (more frames per second) but in fact detail looks similar per-frame no matter what frame rate you select. The 25p at the end looks soft because it is ISO 3200 with heavy noise reduction applied by the camera.

The codec is definitely an improvement over the D610 and D800 with less banding, though again the Sony A7S and GH4 offer the more robust codecs for heavy colour correction and grading. 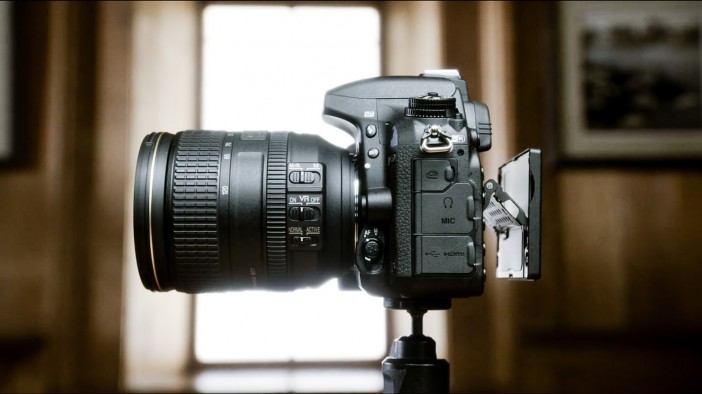 The articulated hinge mechanism on the D750 leaves the vital ribbon cable extremely exposed to breakage, especially from the top when the screen is pulled away from the body (like in the picture above). It just hangs there freely like a rope bridge from the back of the chassis to the LCD panel! You will want to keep your hands well away from the top of the screen when it is flipped out and keep objects away from the area just below the optical viewfinder. If you drop something behind the screen when it is being used, that cable is certain to take a hit. The tilt mechanism on the Sony A7S keeps the cable tucked away from the top, and it’s only slightly exposed from the bottom; and I much prefer the articulated arm approach of the GH4 and Nikon D5300 to both cameras which allows you to bring the screen out to the side and there’s no exposed cable. 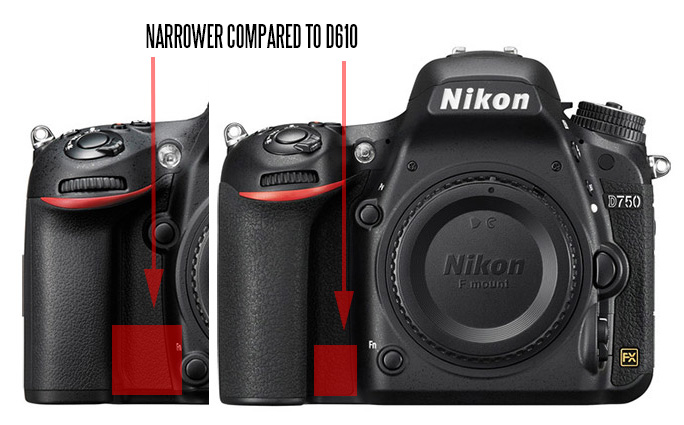 Another thing I didn’t like was that the camera has a very narrow gap between the grip and the lens mount. It’s so narrow you can almost get your finger stuck between. It’s nowhere near as comfortable as the grip on the D610. The camera is not meaningfully smaller that it makes a big difference to day to day usage, vs say a mirrorless camera but that dodgy grip will.

The rest of the feature set of the camera was a rather “me to” affair. It has basic stuff like zebra and uncompressed HDMI which video users have been used to for years now. I also think the video quality has to been seen in perspective vs the competition. Although it’s a solid offering, the D750’s video output still smacks of mediocre 1080p living in a 4K world, surrounded by cameras which offer more features and better image quality. Although the D750 is definitely a viable alternative in video terms for an older 5D Mark III (without raw) or D800, it sits quite far below the Sony A7S and Panasonic GH4 .