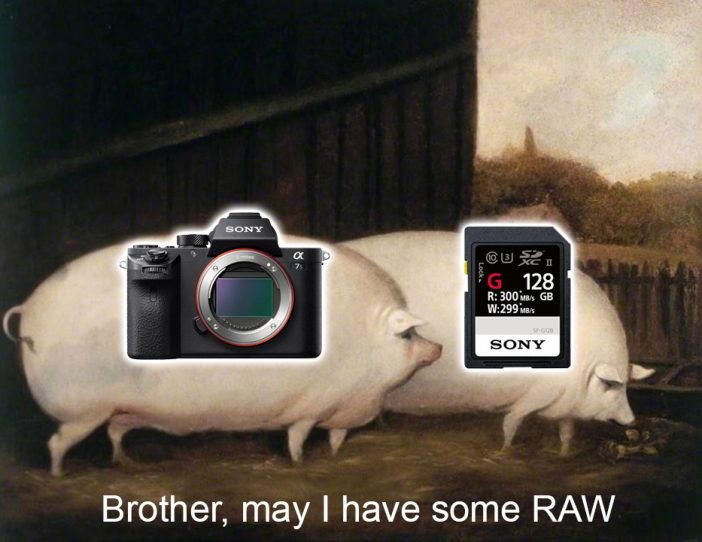 It’s definitely possible, so where is it?

Since Magic Lantern and Blackmagic proved there is a demand for RAW with filmmakers and enthusiasts, the manufacturers themselves have been notoriously slow to implement RAW video on any of their mirrorless cameras or DSLR.

Enthusiasts and pros alike have enjoyed raw on Canon DSLRs now for years with Magic Lantern. Now Sony have left themselves no excuses with the announcement of 300MB/s SD cards (299MB/s write speeds).

Currently the biggest bottleneck to RAW video recording on mirrorless cameras has been the SD card. The current sensors such as the one in the Panasonic GH5 do in fact output 5K RAW video at up to 60fps. No bottleneck on the sensor side. Indeed, any camera with a live-view function has a sensor that does RAW video to the internal buffer memory.

The new UHS-II standard SD cards will be available in March 2017 (more info from Sony here).

So how close are we to RAW video on upcoming cameras like the Sony A7S III?

As RED’s codec shows, RAW can be a practical option not just a luxury.

Although a lot of the compressed RAW technology is tied up by RED patents, Blackmagic have been able to do compressed 1080p RAW video for a while now at a rate of ‘just’ 40MB/s to current SD cards. In fact I’d wager 1080p RAW is already possible on cameras like the Sony A7S II and Panasonic GH5 but the manufacturers, for some reason, won’t enable it.

This perhaps is due to lack of perceived demand and a reluctance to support consumers with the more complex workflow (imagine the phone calls!)

The new SD cards are nearly at SSD write-speeds. They have the headroom to handle uncompressed RAW at 1080p, although uncompressed 4K RAW would be hindered by massive file sizes, uncompressed 1080p RAW has been used by enthusiasts and even beginners for years now for shorter shoots and travel projects.

I call for a minimum of 1080p uncompressed 14bit RAW on the next Sony A7 cameras! If they do implement this easy to develop feature, I will be the first to offer the sacrifice of my money into the Sony volcano for some shiny 300MB/s UHS II SD cards.