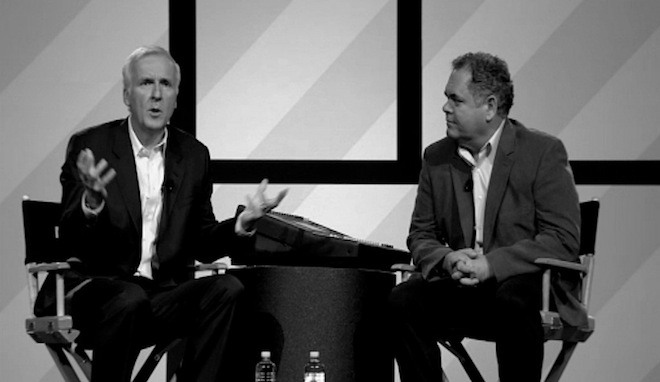 NAB 2011 is almost over for another year. It’s a big promotional event and of course a fantastic social gathering. A common theme of the DSLR scene at the moment is “we’re bored of gear lets see some really creative work”.

In fact many people were going round NAB this year saying that very thing whilst oohing and ahhing over gear. Stall after stall, aisle after aisle of it.

Funny as it sounds, I don’t see why there should be any tension here.

The trick is to balance them and make both work successfully.

As artists, filmmakers are constantly faced with doing just that.

What I think NAB proves is that commercial filmmakers have been very successful at one but not the other. The American film industry in particularly is absolutely superb at successfully commercialising their creative industry, whilst us Brits are hopeless at it!

But I feel there is a balance to be had and I don’t think the balance is right. Pro crews at NAB are telling aspiring filmmakers about art when what they’re really advising on is craft.

Craft is the process, the design, the professionalism and the technique. Art is more provocative, you put your personal voice into it, it’s outspoken and supposed to subvert existing dogma in an original way.

For me NAB 2011 marks the moment when even some DSLR advocates upped sticks and realised that there was no such thing as a ‘DSLR shooter’, that ‘timelapses were all a cliche’ and that ‘gear tests are irrelevant’.

To me this is turning the DSLR ethos completely on it’s head, turning around and heading off in the opposite direction.

Apart from the excitement of FCPX I think this small tweet at me on Twitter today summed it up:

@EOSHD I was getting a weird vibe from the speakers online, like HDDSLRs were nice but it’s time to move on…

So why this weird NAB vibe? Take these quotes made in a live NAB stream for instance…

“Aspiring filmmakers should know when their opinion is valid and when it’s not wanted”.

“The label ‘DSLR shooter’ is silly”.

For me a label isn’t hugely important, but silly it is not. It helps to define a community.

‘DSLR shooter’ is just as valid as ‘documentary filmmaker’, ‘video journalist’ or ‘sci-fi filmmaker’. For the zero budget indie film community DSLRs have come to mean a certain thing.

Nothing silly about that. What happened to the original DSLR ethos which these same people were so excited about last year?

The last thing we need is more ideology and segregation of ‘artists’ on one side and ‘commerce’ on the other. Filmmakers need to understand both skillsets. The most prolific filmmakers in the world often make films for commercial or career incentives as well as just artistic reasons. Let’s not be snooty about making money. Business is a noble art. Both approaches take significant skill.

Expressing an opinion is not a bad thing

The other thing I’m hearing a lot of at the moment is that an opinion, speculation and conflict are bad things. Oh – ‘we must shut up, we must know when our opinion is valid or not’. This blog could be a case in point – oops.

To me this again sounds like commercial thinking not artistic.

It puts those who believe it completely at odds with the mindset of artists yet as filmmakers they’re aiming to be artists themselves. See the contradiction?

They clearly don’t have the ability to balance both art and business because they are used to working only in a commercial environment.

Filmmakers should be able to throw away the rule book for artistic reasons – why can’t they subvert the establishment, have a voice and provoke? Because it’s bad for business? F**k that.

I am seeing very little evidence of that rock ‘n roll approach happening in the DSLR community any more, and I find that a turn off.

Francis Ford Coppola was an auteur. Kubrick too. Paul Thomas Anderson is an example of a modern auteur, whose creative voice doesn’t have to come at the cost of mainstream appeal or commercial success. Even James Cameron is an auteur who proves that a focus on tech doesn’t have to be at the expense of art.

Let’s have more auteurs on the DSLR scene, fewer rules and above all less tension between people with different skill-sets and philosophies.