Director Alejandro González Iñárritu and DP Emmanuel Lubezki are at the top of their game.

I wasn’t in awe of The Tree of Life like seemingly everyone else (I didn’t think it had much authenticity, too glossy, too pretentious even) but there’s no denying that both Iñárritu and Lubezki on The Revenant seem to have been greatly influenced by Malick. The use of only natural light (fire especially) and waiting for a particular window in the day to open up for shooting is clearly evident all throughout the movie.

There’s one element The Revenant has returned to the mainstream cinema – and that’s spectacle.

Not the modern sort of CGI roller coasters but something altogether more real and visceral.

The opening of The Revenant is captivating, in the way a good Tarkovsky scene is. Long continuous takes with a wide angle of view roving around a set piece which unfolds violently but with a kind of violent intricacy – like a Rube Goldberg contraption, with fire, bows and arrows. The sound is a crucial element too at this moment. You will know why when you watch it.

I think it’s the sheer spectacle and realism of The Revevant which elevates the story. It isn’t for those who haven’t got the stomach for violence and would prefer to see an empowering character driven feminist drama, like Star Wars: The Force Awakens.

It’s a very lengthy film though, which requires a bit of meditation for you to get into the mood. It’s here you need to lose yourself in the atmosphere so sensitively and masterfully created by Lubezki’s handling of light and the Alexa 65, but it’s difficult when a gormless mainstream audience is popping pop corn into their mouths every 2 seconds for the full duration.

Lubezki likes to get in shockingly close on faces with a wide lens. This is used to sensitive effect, very well motivated camera work with purpose. The 65mm digital format takes medium format lenses. These did give the film a unique feel. It’s the best example I’ve yet seen of the use of a massive sensor combined with medium format glass. The field of view is epic side to side, Lubezki can maintain a ton of beautiful visual elements swirling around the camera even on close-ups of faces.

Dicaprio continues to bury his long gone boyish image under several lays of muck, method acting and apparently refusing to wash. He spends most of the 2 hour 36 minutes of The Revevant grunting and enduring intense pain, which when combined with the diorito chomping of the audience is enough to turn the film into a bit of an endurance trial and I can see why it won’t be for everyone!

First of all, ones can take great pleasure in long lingering takes which sit back and let you observe slowly the characters and the subtle, realistic nuances happening on screen. Again – Tarkovsky-like. Quite French as well. There’s a lot going on subliminally, that presumably will go over the head of most of those who watch it. However, if you’re lucky, you feel it deep in your bones, the ebb and flow of veins on the land and in rock faces, the gusts of wind blowing trees is all very cleverly tied into the story and Decaprio’s protagonist Huge Glass particularly. There’s also an enormous tension going on… a push and pull between the ‘strong trunk of the tree’ (the sensitive protagonist and the native American Indians)  and the more alpha-male 19th century frontiersmen, amongst them a fantastic villain whose fate holds your attention right to the end of the film.

What is amazing about The Revevant is that none of the link to nature feels too ‘new age’ or phoney and that is down to have authentically it’s been created, the sheer realism. Never before have I thought location scouting would pay of so handsomely for a movie. The sun throwing its glow at a rocky cliff face at just the right moment in the script, that’s jaw dropping use of reality and nature. There’s CGI beasts in the film, the bear everyone talks about is indeed a thrilling battle. What is extraordinary about all this CGI is that it never feels like animation, it feels real. Almost as if she has witnesses a flash of light and a vision of Christ, the person I saw it with swears blind to this day that she thinks the bear is REAL and I have to keep telling her that no amount of circus training could make it do what it does in The Revenant!

Finally what about the Alexa 65? 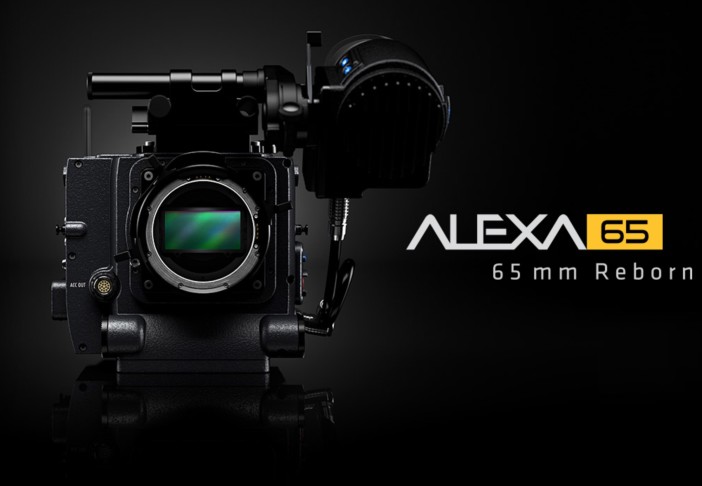 Originally Lubezki wanted to shoot The Revenant on film. Thankfully good sense prevailed. Film wasn’t sensitive enough for dimmest natural light he would encounter on location. This is the first time I’ve seen Alexa 65 footage on the big screen and the new sensor is clearly a good low light performer. With a sensor measuring 54.12 mm x 25.58, it is the same height as full frame 35mm photographic but much wider. Some scenes are a little grainy, a little flat even – but they always suit the gritty tone of the film. It’s not a good film to judge the Alexa’s colour from! The camera shoots 6K with a base sensitivity of EI 800. In uncompressed Arri Raw the camera is similar to a film camera because it only stores around 11 minutes of footage before the recording media needs changing. Even with such a big sensor, focus is almost always perfect in The Revevant but you could tell they had less room for error. With 65mm if focus does go off course, boy do you notice it. The movie avoids slipping into full frame DSLR in-out-in-out focus admirably but for a few jarring milliseconds here and there (a soft eye when it perhaps shouldn’t have been, a little correction where perhaps another take would have nailed it). Dynamic range on the other hand was flawless and it’s a kind of shoot which needed it.