As part of a review I am writing for Mac Format magazine (out in the UK January 19th, issue 296) I had an OSMO to play with. I couldn’t resist having some fun with the steadicam on a stick…

The art of camera movement did take a bit of a back seat for a while, with the advent of DSLR video, rolling shutter and the shallow depth of field obsession.

Now with gimbals and drones we’re starting to see less F1.4 on tripods and instead experimentation with very deep depth of field for majestic swooping wide angle shots.

The OSMO adds more variety to the pot and let me say this is probably the most effortless and accessible gimbal on the market. Everything about it is just so easy and simple to get going. It’s mega light, you can stick it in a backpack and forget it’s even there. Can’t say that about a MoVI!

It’s also incredibly cheap for what you get – essentially the same 4K camera and gimbal from the semi-pro Inspire One drone.

The first thing which impresses me about the OSMO is the build quality considering the price is £457 + VAT. This is a great strength of DJI to rise above the average when it comes to ergonomics and design. The X3 gimbal in particular and the metal clamp on the OSMO for your phone to act as wireless monitor feel like they can take some punishment.

The rest of the OSMO is essentially a pistol grip, battery, software and some extra physical controls like a joystick, buttons and trigger.

The OSMO’s camera head is removable and you can put an X3 gimbal or an X5 on there. The main difference is the X3 has a GoPro size small sensor camera and the X5 has a Micro Four Thirds chip with interchangeable lens mount. More on that in a moment.

Interestingly there are raw DNG stills capabilities too, where the gimbal acts similarly to the 5 axis system on the Olympus E-M5 II to enable amazingly slow handheld shutter speeds. Nice for time lapses with motion blur, although you will have a sore wrist afterwards.

The video stabilisation offered by the OSMO is 3 axis, not 5 axis so there is still bounce as you walk. This has a tendency to make everything look a bit like Call of Duty or Quake III. For an affordable 5 axis gimbal the Nebula 4200 looks like an interesting option and you can put a mirrorless camera on it. 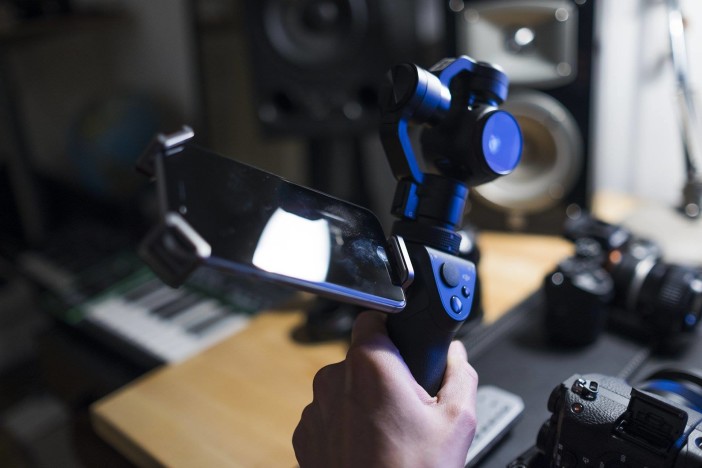 I also found the lens a little bit frustrating as it is fixed on infinity. This is a drone camera so to be expected but it does mean your background looks a lot sharper than your subject if they are within 2-3m of the lens. Maybe they are saving the sophisticated AF tracking system for the next model, or 2025!

The OSMO can take a Micro Four Thirds size sensor with the X5 gimbal and camera head but it’s very expensive, nearly £2k although it would give you very nice GH4 image quality. The pro-priced X5R camera gives the OSMO 4K raw video by the way. Impressive!

The small sensor in the X3 which comes with the OSMO for cheap is certainly not in the same league as those.

I actually think the GoPro has a better codec as well.

There’s no proper LOG mode on the OSMO X3 but the flat picture profile does extend dynamic range a bit in the shadows. Latitude is very limited.

OSMO is an interesting addition to your phone, to say the least

As cables are so 2014 now, of course a smartphone takes on monitoring duties with the OSMO and sits in the very nice aluminium clamp. I found the wireless video feed rather fuzzy and prone to the occasional interference, lag or breakdown. I’d have preferred the option of a wired-in articulated LCD. The image quality of the feed via Wifi is not great and doesn’t make use of the resolution of a high end smartphone like the iPhone 6S Plus.

Where the approach does work a treat though is bringing the cost of the OSMO down and giving you a very thin, light monitor.

The battery cycle of the OSMO isn’t a strong point, mainly due to the brushless motors working so hard in the gimbal and the always-on wireless connection to your phone. This drains the battery in your phone pretty quickly so just bringing more batteries for the OSMO on a long shoot is only part of the solution. That’s another reason why I’d have preferred a mirrorless camera style articulated LCD built into the OSMO’s pistol grip. The Samsung Note 4 and many others have AMOLED screens and interchangeable batteries so maybe better to use that with the OSMO.

It’s very interesting to compare the OSMO to the Olympus E-M5 II for stabilisation. The Olympus has 5 axis sensor shift and offers the best of the best from any mirrorless or DSLR camera by a large margin and significantly undercuts the DJI OSMO’s pricey Micro Four Thirds camera, the X5. However it’s still not quite a match for a gimbal and although it has a great sensor and lens mount the E-M5 II’s video quality isn’t cutting edge by any means. It does offer the large sensor look with a range of Canon lenses through a Metabones Speed Booster XL-T adapter though! You get a 1.3x crop so almost full frame and the stabilisation works as well with a Canon lens with no OIS as with native Micro Four Thirds lenses.

I find the OSMO handles the transitions between different movements better than the E-M5 II but in some ways the Olympus camera can hold it’s own. Here’s a direct comparison of the same walking shot on both the OSMO and E-M5 II.

With the new v2.0 firmware on the E-M5 II the 2.3x crop is gone (2.0x full sensor area used instead) when you turn off the added digital stabilisation, which on top of the sensor-shift doesn’t make a huge amount of difference anyway. In fact I prefer to turn it off to reduce image warping on wide angle shots.

Side note – for stills they both perform extremely well, in excess of 4 stops.

Forget recording audio with the onboard mic on the OSMO… It’s absolutely terrible.

Ergonomically the OSMO is very good but a little slow to get up and running vs a DSLR.

It is with a DSLR or mirrorless camera I think it should be compared, but you can just so easily compare it to the painfully slow setup of a MoVi or a gimbal system that needs careful balancing depending on what camera you have attached. In comparison the OSMO is WAY faster and easier to get going. Anyone can do it. 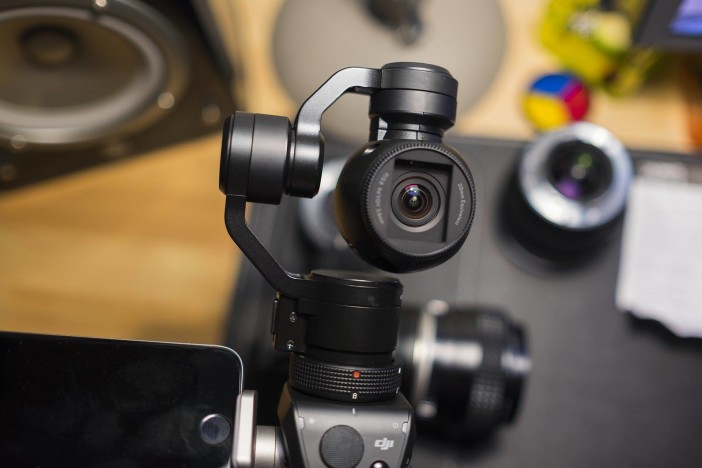 Once you pull it out of the bag it takes about 10 seconds to clamp your smartphone into the holder and another 10 seconds to enable the WiFi link, & load the “DJI Go” app (provided it has already been paired up for the first time beforehand). It takes very roughly another 10 seconds to unlock the gimbal in 3 places, this is done by hand in 2 places and there’s a lock in one place. So far so simple, albeit a little fiddly and 29 seconds longer than getting going with the E-M5 II!!

So far so good…

I had huge amounts of shot freedom with the OSMO and it was a blast to use creatively.

Image quality in 4K with the flat picture profile though is only mediocre by cinema standards, if I were serious I would get the X5 gimbal & MFT sensor, add in the DJI follow focus and put the tiny Panasonic Leica 15mm F1.7 on it.

Do watch out for my OSMO review in Mac Format magazine when it goes out onto the news stands in the UK on January 19th (issue 296). It is a bumper revamp issue.