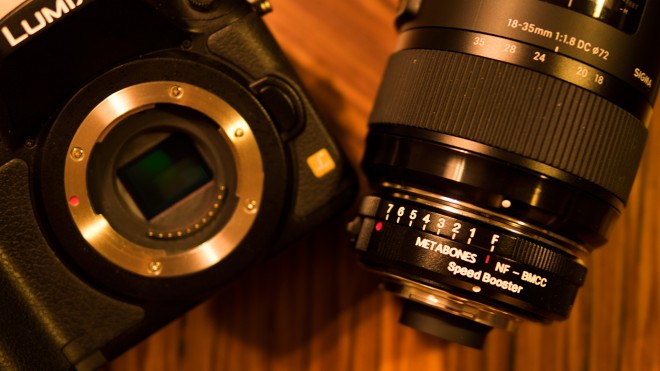 I had hesitated to try this for so long, but finally today a brave EOSHD reader sent me a tweet saying he had fitted his BMCC Speed Booster (with protruding rear-glass) on his GH4. It just goes straight on. First a BIG disclaimer. Speed Booster adapters have adjustable glass which can sit closer or further away from the sensor to fine tune infinity focus. On some adapters this will mean potentially it may clash against the inner housing of the mount and be damaged on a Micro Four Thirds stills camera. Therefore I do not take responsibility for any loss or damage if you try this.

Currently my pre-production GH4 is back at Panasonic and I am awaiting my retail unit to ship. In the absence of a GH4 to try this on I instead gave my BMCC Speed Booster a go just now on the GH3 and does indeed fit.

A particularly good match seems to be my Nikon E series 35mm F2.5, a cheap but sharp lens which becomes a 22mm F1.6 when paired with the GH3 and BMCC Speed Booster. 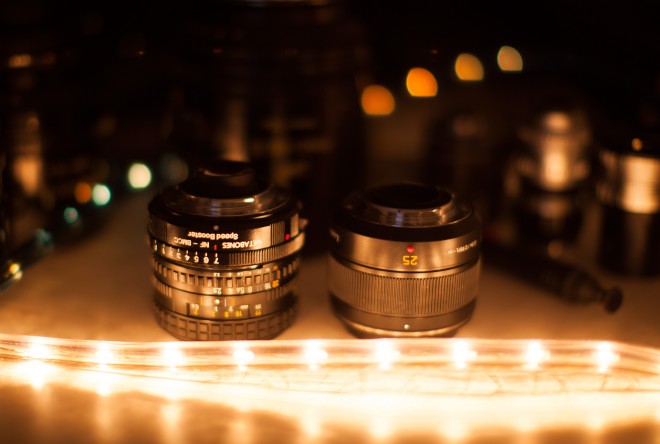 On the GH2 it doesn’t mount, the adapter just backs into the housing around the sensor but on the GH3 I was even able to take stills with the mechanical shutter without the mechanism clashing with the back of the BMCC Speed Booster so clearly this and the GH4 have more clearance inside the mount than I expected. By the way, the Pocket Cinema Camera Speed Booster did not mount (the glass goes even further into the mount on this adapter).

The full frame look is something I’ve always tried to get on my Lumix cameras and with the original Speed Booster I got closer thanks to Metabones – with a Super 35mm equivalent sensor size (1.5x crop over full frame, the 1.0x crop in cinematography terms) and an exposure gain of 1 stop.

The standard Speed Booster for the GH4 and other Micro Four Thirds camera is a 0.71x optical reducer but with the Blackmagic cameras they took things further. A 0.64x Speed Booster for the BMCC and a 0.58x for the Pocket Cinema Camera. These have more clearance behind the mount as they lack a mechanical shutter, so Caldwell Optics could bring the glass much closer to the sensor.

On my GX7 it even left a mark from being rotated whilst tight up against the inner mount housing which shows how risky this is to try and why I urge extreme caution. I haven’t checked infinity focus on this trick yet either… If the glass has to be screwed back slightly in the adapter even 1mm obviously none of this is going to work properly. The ideal situation would be that the glass has to move forward very slightly… then at least it won’t leave crop circles inside!!

Strangely I found when taking a still with the GH3’s mechanical shutter, the final exposure of the still was much brighter than in live-view or movie mode. Much brighter than F1.4 on my Panasonic Leica 25mm F1.4, when the maths say it should be about as bright as F1.6 with my Nikon 35mm at F2.5. Then I discovered the shutter speed seemed slower than what the camera was set to and higher speeds like 1/200 didn’t have any affect. Plenty of motion blur still. I think what is happening here is that the back of the Speed Booster is putting a little bit of pressure on the slightly flexible housing around the shutter and preventing the release mechanism from firing as fast as it should. So like I say – do not risk your shutter and put it in electronic shutter mode or video mode ONLY!

Interestingly the GH2 has a 1.86x crop sensor and this would have become a 1.19x crop, practically full frame, had the adapter fitted.

Already at 1.28x crop my Sigma 18-35mm F1.8 vignettes at 18mm on the GH3 in 1080p when used with the BMCC Speed Booster which gives an indication that it does indeed work to deliver an effective imaging area larger than Super 35mm and APS-C. Full frame glass works nicely on it.

I’m going to shoot more with this in the coming days, to see what performance is like, especially in the corners where I am not expecting miracles but it’s good to know that a 2.2x cropped field of view can be changed into a 1.4x one even if there are trade offs and risks associated with it.

For now I recommend sticking with the official Micro Four Thirds Speed Booster if you’re a GH4 owner! This still gives you a approximately Canon APS-C sized 1.56x crop rendering of your full frame lenses and is a perfect match to APS-C lenses like the Sigma 18-35mm F1.8.

Count this as just an experiment for now.