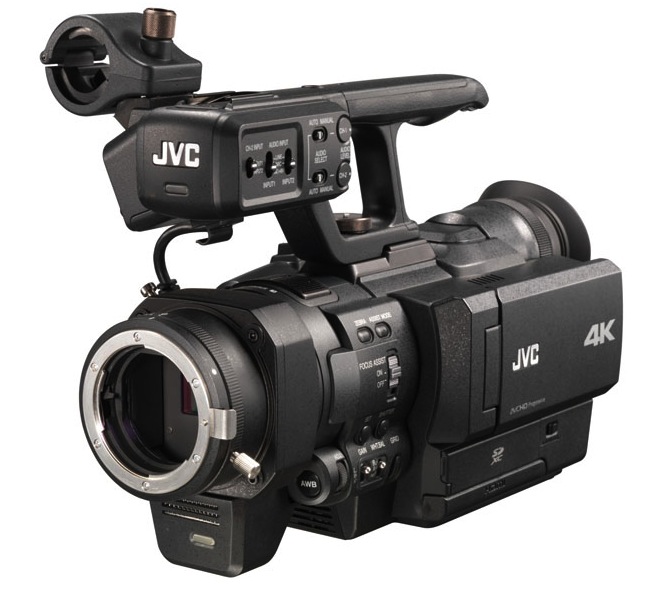 We saw a prototype of this camera a long time ago, reported here on EOSHD one and half years ago, the form factor and specs of the final model are remarkably similar to the prototype.

What’s wrong with it? This calls for a list:

The Nikon mount – of all the mounts they could have chosen, the Nikon mount is the most locked-in to one lens range. It rules out Canon and PL glass, and pretty much everything else.

The sensor – the size of 1.25 inch is no-man’s land territory for lenses. Smaller than Micro Four Thirds but larger than Super 16mm, it conforms to no common video standard at all. It’s also completely unsuited to the photographic Nikon full frame lenses JVC requires you to mount on it. It isn’t suited to DX glass either.

The recording format – I really hope quad-1080p does not get off the ground. It is obsolete and records 1080p quadrants to no less than FOUR slow SD cards. The quadrants then have to be stitched together in post to form the 4K image. The combined data rate is 144MB/s, handled easily by any cheap SSD and also Sony’s SxS ExpressCard 800MB/s magazines but not by a single SD or compact flash card.

The outputs – At $18k you’d expect HD-SDI. Nope. OK a single current spec HDMI which allows for 4K over a single connection? Nope. Yes the JVC uses the quad-1080p standard for it’s HDMI. If one HDMI cable isn’t bad enough, JVC wants you to plug in 4! I have a hard time doing that tidily with my TV let alone a camera. There’s likely to be zero support for this on new displays, field monitors and external recorders either, and nor should there be.

No ND filter – Despite having a relatively small sensor and ample room to fit a filter wheel, JVC didn’t seem to consider it essential. Exposure? Who needs that!?

The camera has the form factor a VHS recorder from the 90’s. Apple can fit a 12 core desktop computer in a cookie jar but JVC can’t fit quad 1080p in a C300 form factor?

The release – JVC, perhaps sensibly, are not releasing the camera on a wide international basis, but taking limited orders directly within Japan. They could have saved a lot of money and not developed this camera at all.

In my opinion it is hard not to conceive of a more ill-suited product design than this, from the sensor to the recording format and the form factor it seems 4 years behind the ball. If corporate giants like JVC want to compete they have to move faster. I have a feeling that at the time this spec was devised, JVC thought quad-1080p would be the stepping stone everyone needed to get from 1080p to 4K in a practical way, but instead it is a practical nightmare. The electronics to record 4K to SSD cards are cheap and commonplace in 2013, but seemingly JVC came up with a blueprint several years ago and developed it at a super cautious pace. This culture needs to change.

It would be great to see JVC put the full resources of the company behind a interchangeable lens video camera.