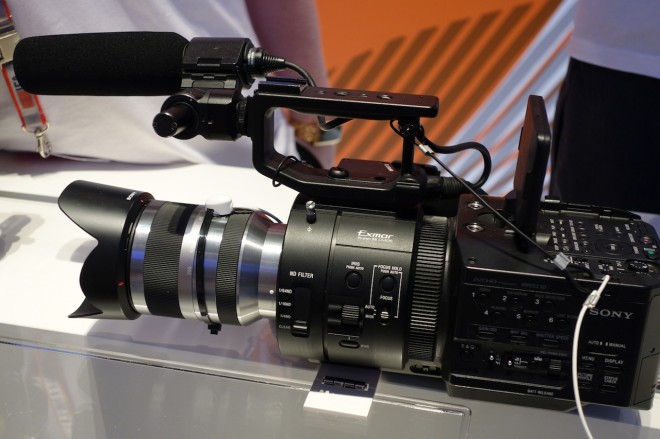 Today I was at the IFA consumer electronics show in Berlin. Sony had the FS700 to play with. Asking about the 4K update – I was told that by Sony insider (not a sales rep) there are two external recorders already on the market that will work with the camera in 4K mode by Aja and Sony. Sony have no plans to restrict 4K output to their own external recorder(s), and that is the first bit of good news…

The Ki Pro Quad can be used with the FS700 to acquire 4K after the firmware update.

Encouragingly this 4K firmware update is ‘weeks away’ according to Sony, unless that strategy changes or any unforeseen consequences occur. I asked about pricing and I am told it will be similar to the S-LOG upgrade for the Sony F3 which currently retails for £500 + VAT at CVP in the UK. It is just a firmware update. If true then the pricing is superb for 4K. As more 4K boxes come onto the market (from Atomos or Blackmagic for example) the prices of these should drop under the $1500 mark. I’m predicting that in 2 years you will be able to shoot 4K on this camera and external box for a grand total of around $6000 on the used market. 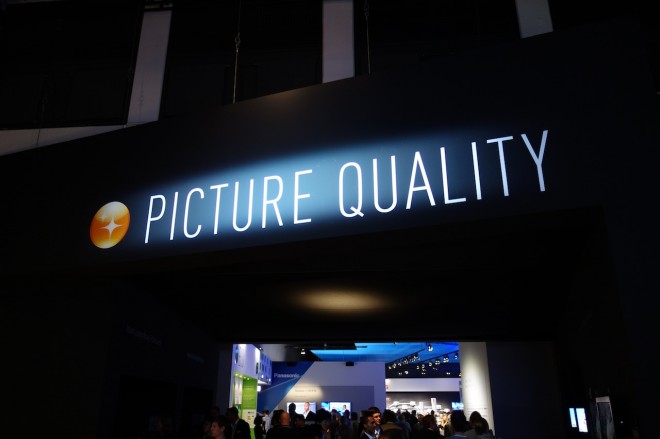 The FS700 is not a perfect camera in terms of handling though – the build doesn’t seem much like a step up from the FS100 and the ergonomics well short of C100 standards. I’d say short of the Blackmagic too because I simply don’t like or need the complexity of controls or scatter-dash approach to multiple buttons, also the built in screen is far smaller. I like simplicity. But the technology inside is superb for the price.

It was explained to me that the reason the FS100 didn’t have an ND filter was that Sony had to research a thin enough material to have the ND fit in E-Mount. The flange is only 18mm, smaller than any other on the market and to get the required optical quality was a major difficulty. The ND in the FS700 is a entirely new kind of material. Sure you have ND filters in other cameras, like the PureView 808 or Canon G1 X but these don’t have the Super 35mm sensor size or optical quality of an FS700 with Cooke PL mount lenses, so Sony had to make sure the ND material didn’t compromise that camera in the cinema optics market. 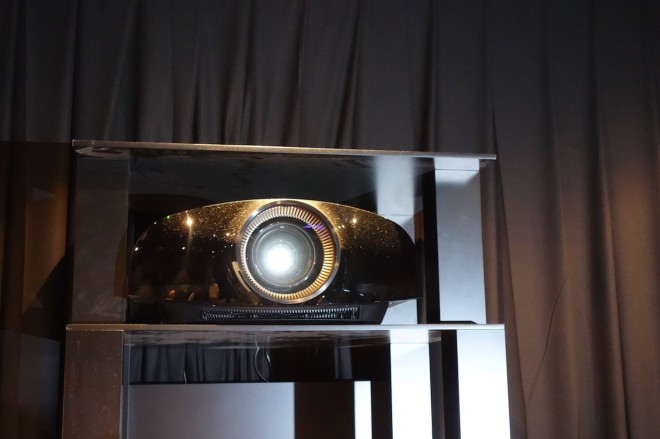 I watched a presentation of Sony F65 material shot in Berlin, screened on Sony’s new 4K projector, the VPL-VW1000ES. This beast was a consumer projector for the home. Image quality as you’d expect was very good in terms of resolution but in other aspects rather looked like a merely very good $2000 1080p home theatre projector. It didn’t help that the demo material was rather boring – a orchestra of old men in a dull music hall, very little colour. The material on the 4K TVs was far better to look at. Also more impressive was their 84″ 4K TV and BluRay upscaler. The quality of the upscaling from 1080p to 4K on this monster 84″ 4K display has to be seen to be believed. I have no idea how they’re doing it, it was like watching 4K material. Nobody could tell the difference between BluRay on this and actual 4K. I was quite astonished! It confirmed for me that a very good 2.5K camera like the Blackmagic Cinema Camera will look almost nip and tuck as good as a Red on a 4K 84″ screen with the upscaling technology available next year. I am told the PS3 may get the upscaling technology with a software update, and that the PS4 will be 4K out of the box. 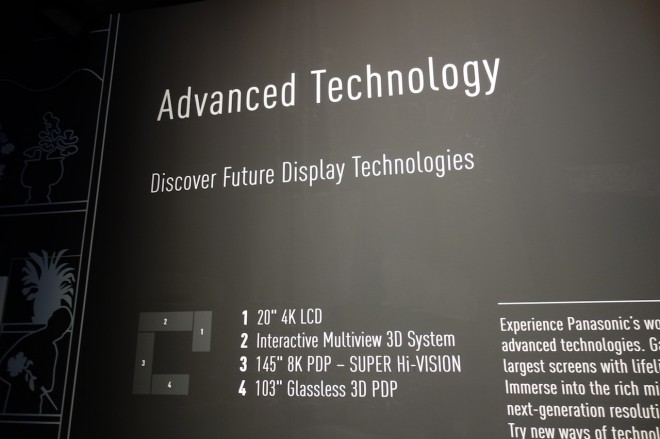 Panasonic had an 145″ 8K Super High Vision display. This was like looking through a window, but it wasn’t a huge step up from what Sharp showed last year. Colour and contrast was rather muted compared to Samsung’s OLED 55″ panels which are still around 1-2 years away, very expensive and not 4K yet. Of all the new displays coming out, I think Sony’s 4K TVs will be the best choice for high end home cinema, with Samsung and LG OLED displays certainly the mass market TVs of the future once prices become more reasonable. 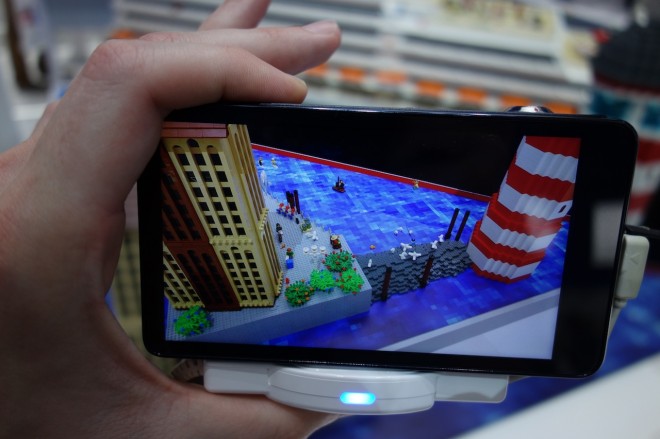 The Galaxy Camera is a standard small chip compact but with a much larger Galaxy S3 style display on the back – the best I have ever seen on any camera be it a compact or a DSLR. This and the superb user interface, full Android support and apps was the best thing about the camera. The lens was a 21x zoom, which went to a very wide 23mm at the wide angle but the 16MP sensor was pretty standard for a compact in terms of image quality. You can use it as a phone only in the sense that it has a mic and Skype app on it. It isn’t designed to replace a Galaxy S3, for obvious reasons – Samsung seem happy to cannibalise their compacts but draw the line at smart phones. You can upload photos via Instagram or an app of your choice from the Android store via 3G or WiFi.

The user interface was very responsive and the camera had full manual control of shutter, ISO, aperture, etc. The video mode is 1080p and the live view display showed no signs of any moire or aliasing. There’s the usual smart-phone touch AF points but a compact-like zoom rocker and shutter button. 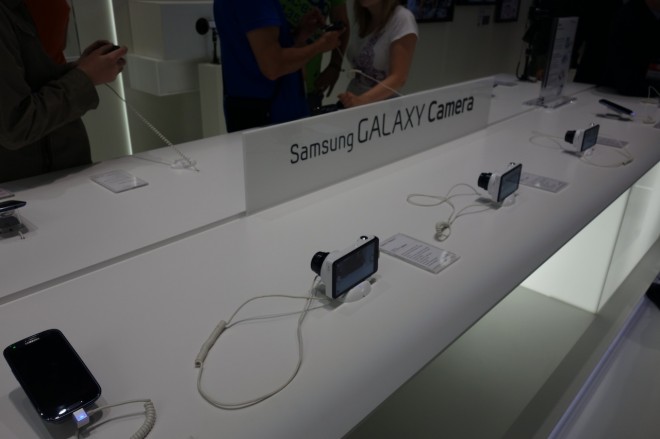 At the Panasonic Lumix stand their new FZ200 bridge camera was the most interesting tech on display because it features a very nice 25-600mm F2.8 lens, constant F2.8 all the way to 600mm – the best lens ever on a small chip consumer camera. The camera body felt like the GH2 in terms of handling, but with a much smaller (yet crisp and detailed) EVF. On the slow-mo side it is also an interesting camera creatively, shooting 720p at 120fps. But this is restricted to 100fps on the PAL version to sync with 50hz lighting. I’d have liked to have seen it be PAL / NTSC switchable for 120fps outdoors, conformed to 24p in post for an extreme super slow mo. The effect is rather beautiful. It has full manual control in video mode, like the new LX7 – but not in high speed video mode unfortunately. Build quality was a modest step up from the FZ150. I can see a lot of nice creative uses for 120fps at 600mm F2.8 in a $600 handheld camera. However manual focus was really dumb on this… It was controlled by the click-wheel, painfully slowly! This camera is interesting but it really needs a Sony RX100 style clickless focus ring around the lens barrel and peaking. 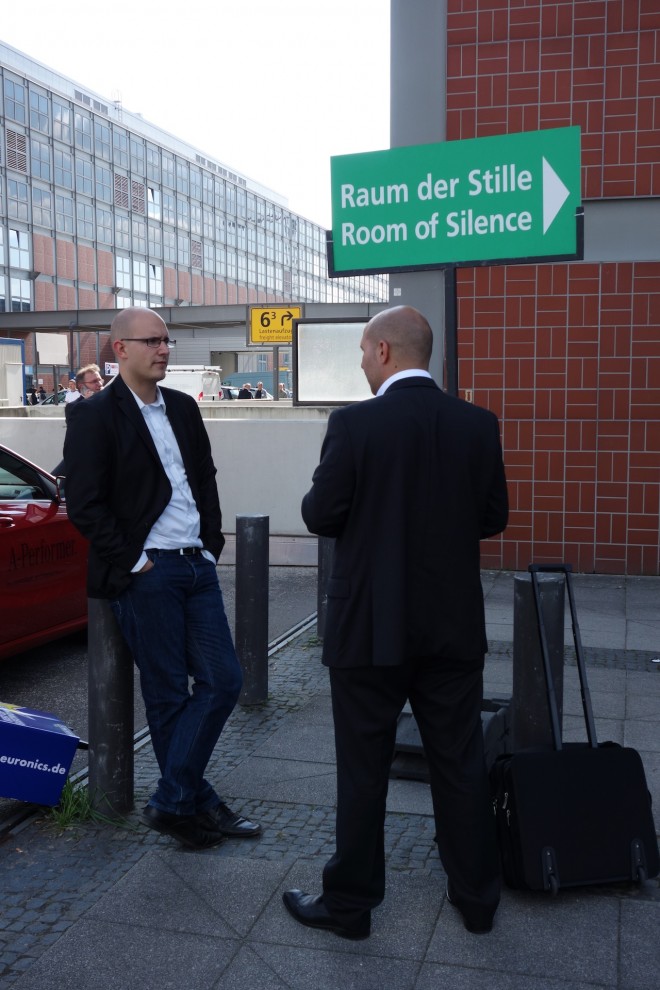 Sales people – put them all in there?

At the show there were a lot of people from Japan, some engineers from Sony attending to the 4K projection, and the pro product reps were also company insiders and extremely knowledgable.

But I was astonished how much misinformation the hired-hand sales people were giving out on the show floor. It is time they put some enthusiasts in these roles, some people who care about the consumer electronics they are informing people about. The Samsung person I spoke to swore point blank for 5 minutes that the sensor in the Galaxy smart phone was APS-C size, and seemed quite offended when I told her she was wrong! One of the Sony people told me the 1″ Exmor RX100 compact and the APS-C NEX 5R shares the same sensor and suggested I try the RX100 to get an idea of what the image quality would be like on the NEX 5R. This camera by the way was a rather incremental update over the 5N. I’ll wait for the final production model to see what they have done to the video mode. Compared to the smart apps on the Samsung Galaxy Camera, I’m afraid the NEX 5R really falls down on the user interface and responsiveness of the screen, which is also too small and cramped to be a touch screen. The swipe to scroll moves a menu at about 2fps, so that was rather painful. I am told the image quality is the same as on the previous NEX 5N and that the sensor has simply been updated for the phase detect AF points. Hope they are wrong and that we have a reason to upgrade beyond the apps. I am really happy with my RX100 though – really feels like having DSLR image quality in your pocket. All the images on this page were taken with one.

More photos from the show: 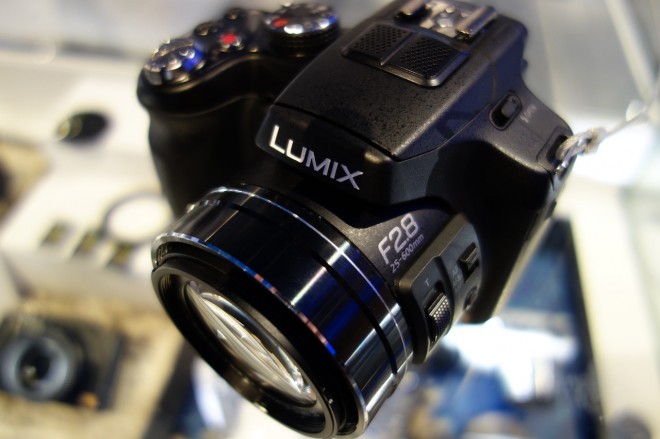 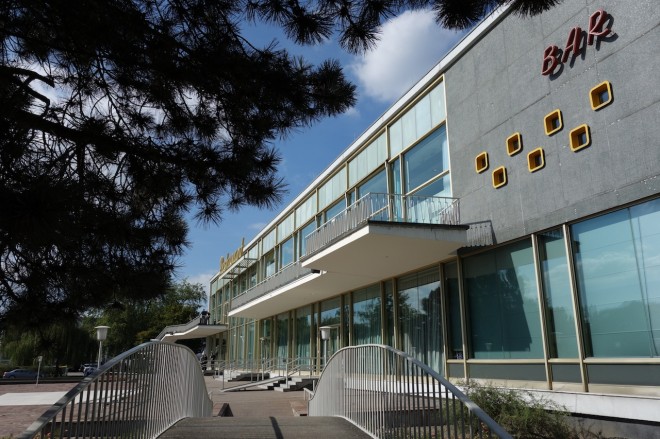 Remind me, what decade am I in?! 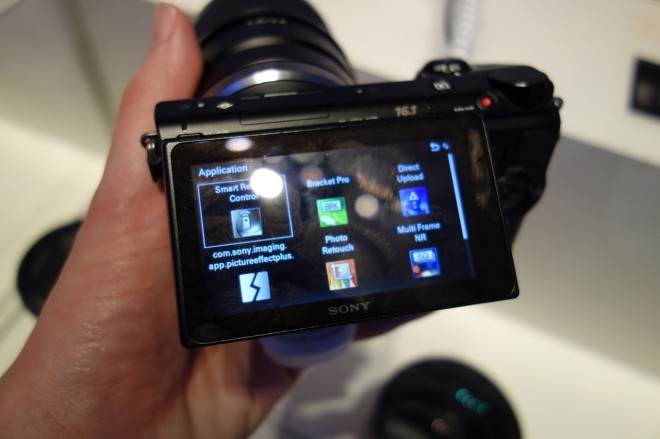 Sony’s take on a smart-camera. Nice hardware, shame about the apps 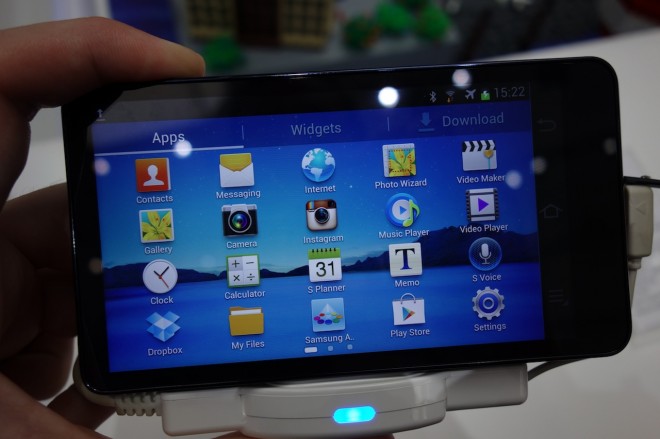 But a South Korean company with Google’s help have got it right. The Samsung Galaxy Camera’s screen and Android OS is superb for a camera. 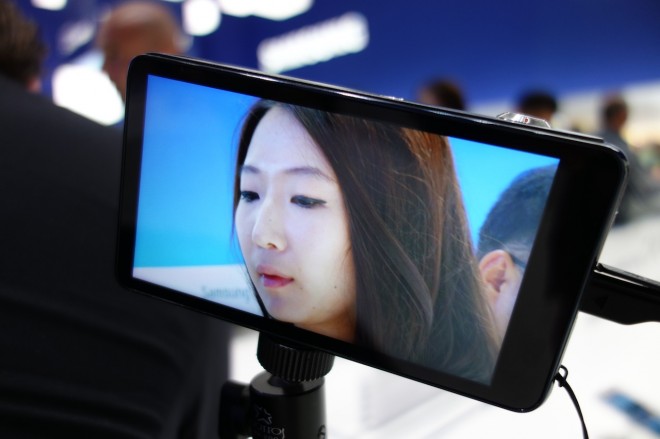 The 21x zoom is also extremely long for a smart-phone camera, yet the camera remains very thin with a high build quality. I’m not expecting it to be cheap though – more like Galaxy S3 priced? It is out before December. 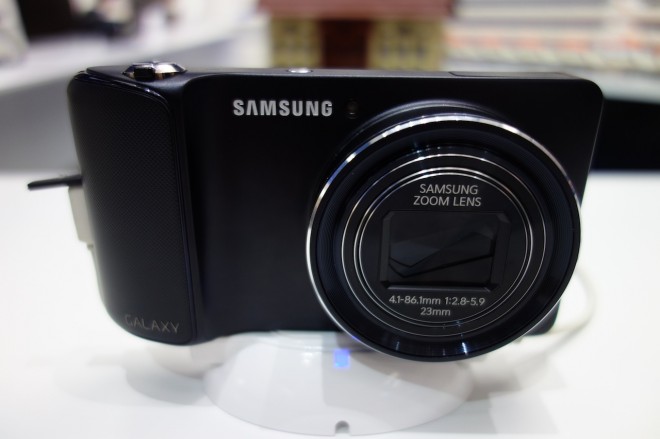