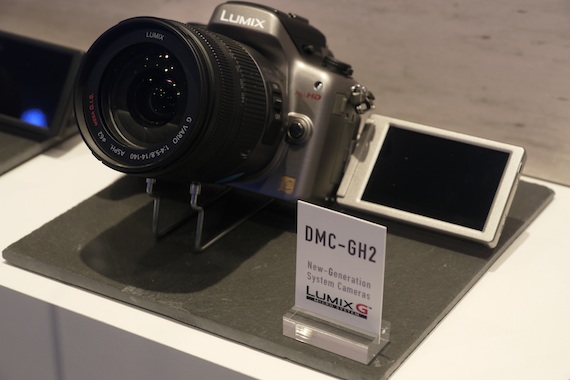 Panasonic need to copy Canon’s approach with regard regional standards and go global. Clearly this is a decision from high up and not an engineering lead one.

I’ve been told by a source close to Panasonic that the final (non-prototype) PAL camera does indeed lack 25p and only has 24p. That confirms what we already suspected.

I’ve shot with an NTSC GH1 with 24p under British street lights, indoor lights, all kinds of lights. Unless the shutter speed was set to 1/50 or 1/100 you get a strobing effect on many types of lighting (especially street lighting).

That Panasonic have left out 25p on the PAL GH2 is a strange decision which warrants further explanation and investigation. There is one flicker of hope however that the camera might be fine.

Since the GH2’s sensor has a 50p output mode, it is reasonable to speculate that in 25p mode the GH2’s sensor is actually running in 50p and simply dropping every 2nd frame to produce 25p. The higher sampling rate means that the look of 25p can be produced just fine – it is not the same as trying to achieve 25p from 30p where there aren’t enough frames to evenly drop, and you get a stuttering effect.

50p with frame dropping to get 25p would allow the GH2 to record in sync with 50hz electrical lighting thus the camera is in sync and no flickering occurs. It could be that Panasonic just term it Cinema 24p for marketing reasons to avoid confusion. Until I get my hands on a final production unit I won’t know for sure.

However one thing Panasonic do need to add regardless, is the ability to switch between 50p and 60p.

60p on the NTSC model offers better slow motion capabilities, and many cinematographers travel between PAL and NTSC regions – they need a camera which is practical in both regions when used under tricky electric lighting. The PAL model would be no good in NTSC countries and the NTSC model would not be good in PAL countries, even assuming Panasonic have solved the issue of 24p in PAL countries by dropping frames from the 50p sensor output.

The hacked GH1 featured this PAL / NTSC switch so it is just a simple firmware patch.

Whilst I understand Panasonic’s concerns about the grey market flourishing, and tax dodging retailers importing GH2s to PAL regions en-masse from Panasonic’s cheaper territories in Asia (such as their domestic models in Japan), the ability for a camera to work flawlessly in both PAL and NTSC regions is an essential consideration for serious filmmakers, video journalists and even tourists.