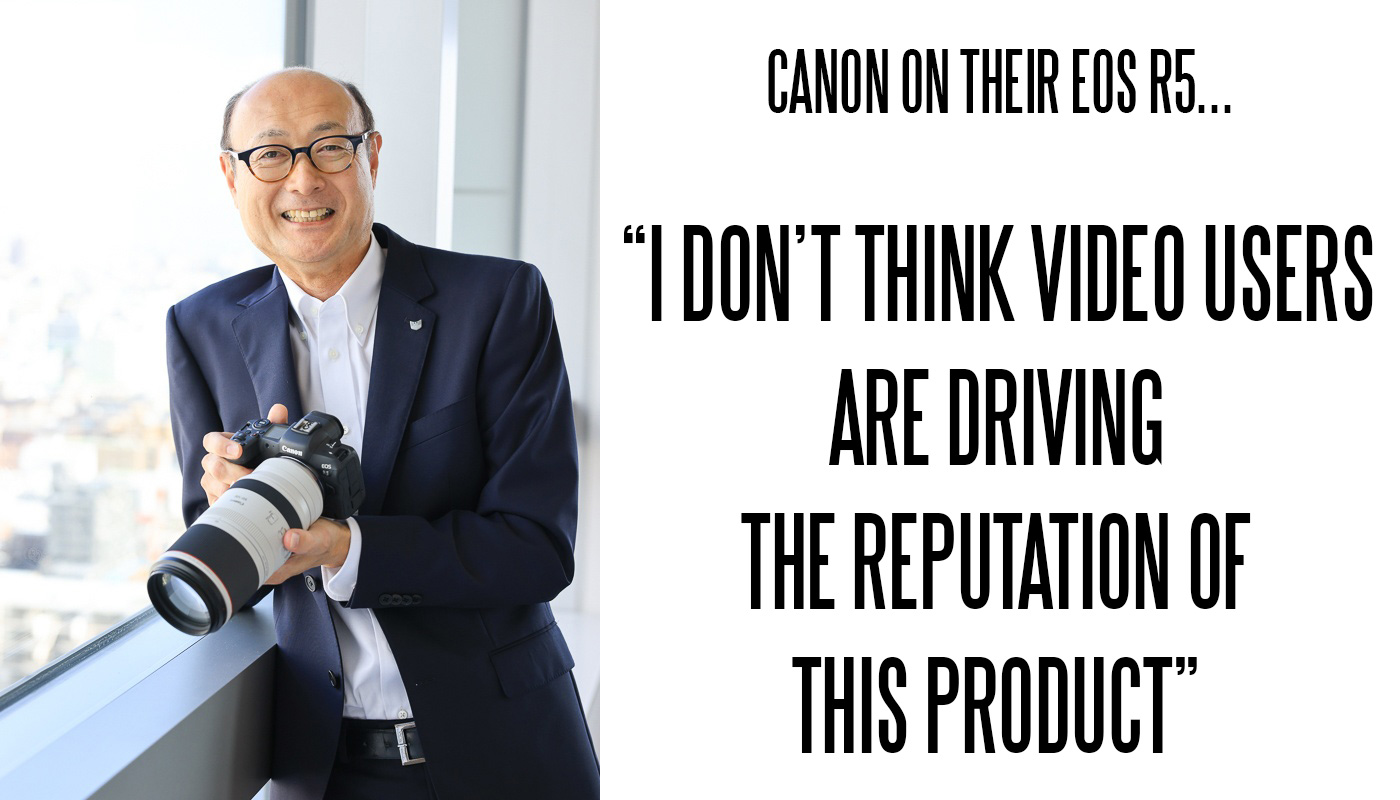 Canon’s imaging division general manager Takeshi Tokura has given an interview to Japanese camera website Toyokeizai in which he touches on the EOS R5’s controversial debut for filmmakers.

Tokura claims 8K went on there in an effort to be first ahead of other companies, and that he doesn’t care whether it attracts video users or not.

There is no big mission to please us… If it gets through a shoot without overheating, we should be grateful but really Canon’s management doesn’t care.

“I don’t think video-focused users are driving the reputation of this new product. However, I was particular about the spec of 8K, and I was enthusiastic to put it out first, ahead of other companies. We have been making efforts to improve video performance at the same time as still images. Naturally, this new product has significantly improved still image performance, and I am not strongly conscious of giving it a big mission to attract video users”

The most amazing thing for me is that he’s still in his job.

Next, Tokura talks about the company focusing on new-fangled ‘video input devices’ (translated from Japanese 映像入力機器としてのカメラ), not just mirrorless cameras with interchangeable lenses. This is Canon’s grand vision for the future.

“Customers who buy a camera don’t want the camera itself”

Yes, we don’t want cameras any more. We want ‘experiences’.

We want the ‘product’ of what the camera can do… It could be a VR experience, AR, or security camera analytics and factory monitoring (IoT – eye of the factory).

This is shorthand for diversifying the imaging business, away from just photography. Network camera with AI abilities and VR cameras with 360 degree field of view or video input devices to support augmented reality content. Canon miss the point that these devices need to have strong vertical integration with software, apps and services.

Is Canon an established player in software? No. In the consumer market, the best of these ‘video devices’ are more likely to be built into existing products like smartphones, VR headsets, smart monitoring devices and computers, instead of expensive dedicated stand-alone I/O devices. There will be some stand-alone Canon cameras for these modern purposes I am sure, and I am equally as sure they will fail on the market or remain a niche.

“When we talk about cameras, we mean single-lens cameras and mirrorless cameras, but we need video input devices that are suitable for different use cases. I think that such changes in thinking are also reflected in the changes in the development concept that we have set up.

Tokura goes on to explain how Canon have adapted their philosophy in terms of product priorities.

In the film era it was “fast, comfortable”.

Next in the digital era it was the same, but with the addition of “high image quality” (more megapixels).

Values ​​are diversifying mainly among young users, and the concept has been changed to “quick, comfortable, and comfortable image quality”.

What does comfortable image quality mean?

Comfortable as in ‘good enough’?

“With a new concept camera for younger age groups, the image quality should be at a certain level, and it is only necessary to be able to shoot with comfortable image quality.”

I think what Tokura is eluding to here is that for the younger generation of Tik Tok social media influencers, a smartphone camera is the comfort zone for image quality and they’re not really sold on full frame 8K. They just want the byproduct of the camera – that is, fame, adulation and more followers.

Indeed, what are Tokura’s enlightened thoughts on smartphones?

Cameras that can only take pictures have been eliminated.

A bit strong if you ask me. Makes me think of the poor old Nikon Df. Didn’t even do video let alone Instagram. Designed to look like a film camera. This kind of concept has been eliminated in the minds of Canon and from now on they want to court the YouTube crowd with a dongle and provide eyes for all the factories.

A lot of film camera fans still out there. Fuji shutting down film production and Canon moving onto selfie sticks. Not good is it?

Besides, the EOS R5 is not exactly prized for its brilliant network connectivity.

In addition to smartphones, cameras that allow you to enjoy shooting in various styles such as “GoPro” have also appeared. The network environment has also been improved, and the environment where it is easy to share videos on YouTube etc. has also been improved. Customers have come to realize that there are new ways to enjoy the camera, such as shooting while playing.

Still, Canon has not completely given up on the “high image quality” part of their product philosophy. Speaking about the 5G era and eye of the factory (IoT) technology, Canon are eager to move the market forward from just audio and text(!)

That is where the “high image quality” that Canon has adopted as its development concept lives. There is still more room for utilization of optical technology such as cameras.

Honestly, I could do this man’s job with my eyes closed.