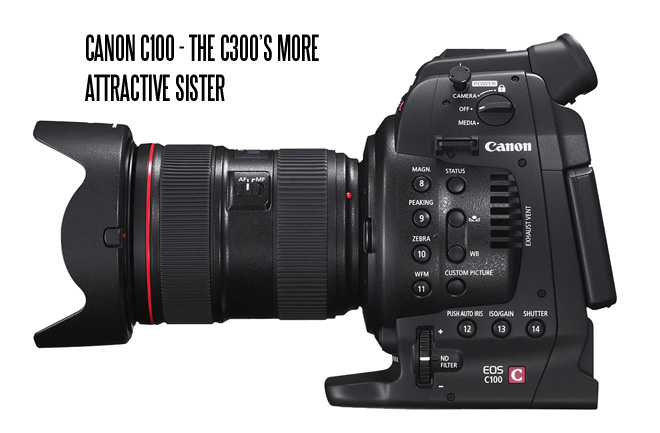 UPDATE: CVP in the UK are taking pre-orders at just £4162+ VAT (£4999) which is much better than expected. The initial price quotes by sources was $8000. When the Adorama / B&H pre-orders start, will update the pricing info again

Canon today launched the much speculated Canon C100, the budget version of the C300. Initially set for a price under the Sony FS700 (around $8000), the camera is double the price of a used FS100 but features built-in ND filters and the same sensor as the C300. The design and handling looks fantastic, it is even smaller than the C300 (by some 15%) but the major compromise is the codec which is now AVCHD at 24Mbit 4-2-0.

However HDMI is uncompressed so for effectively another $300 you can record broadcast standard material to a Blackmagic HyperDeck Shuttle in ProRes.

I really like the C100 at first glance. But will it be enough to compete with the FS700?

The C100 is essentially a ‘baby C300’ but it shares a surprising amount with its big brother.

Priced at $8000, which is still too much for a DSLR shooter but in my opinion a very appealing price being nearly half of what the C300 costs for essentially a very similar camera. I really like the uncompresseed HDMI, placement of the LCD screen, magnesium alloy build and the fact it shares the same sensor. It remains to be seen if the image is as good. If it is only the codec which has dropped down, that is very easy to fix via uncompressed HDMI, which will likely also be 4-2-2.

The inclusion of ND filters is also very sensible, I am glad they didn’t drop those to lower the price.

However what I prefer about the FS700 for the same price is the fact it has an E-mount allowing me to use PL mount lenses on it. As far as I know the C100 comes only in EF mount, unlike the C300 which you can get in PL or EF. OCT-19 LOMO anamorphic lenses are out for this camera but I can use them on my FS100 for half the price. The E-mount also allows you to use Canon FD glass (bargain), Leica M (beautiful and compact, plus the 50mm T0.95 from SLR Magic), Lomo OCT 18 and even C-mount S16mm lenses. With the very good Metabones adapter there is essentially no difference between the Canon EF mount on the C100 and the one you can add to the FS100 or FS700 for just $400.

So photographic, not cinema lens mount aside (and the Blackmagic Cinema Camera has the same drawback) the C100 has very few flaws at first glance. I’d have preferred to have seen the EOS M mirrorless mount and EF adapter on the C100 to give us more choice in lensing. Lenses are vital. Mass appeal no problem with EF mount. More interesting choices however, are. 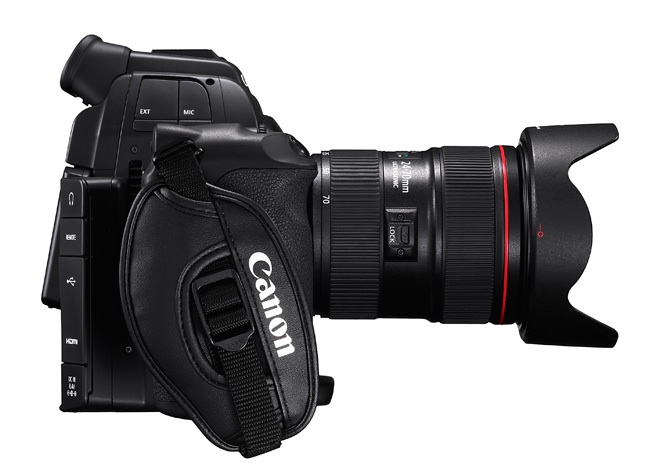 Above: the new C100 is small – design looks fantastic with some control compromises – but well thought out ones

Canon say they are rolling out a firmware update for AF on the C100, this will allow you to use the silently focussing STM lenses although in my experience these are less than silent and very slow in live view mode on DSLRs. Of more importance to me is an auto-exposure button for quick shot setup when you want to grab something live and unfolding in the field, and the camera is set up for something else.

STM lenses can be used for rack focus electronically, it will be interesting if Canon brings out a firmware update or accessory to allow the follow focus to be done through stepping motors in the lens, which in my view is how focus should be done in 2012 rather than mechanically with a set of gears or pulleys. This would cut down a lot of hassle and remove further bulk from the rig. The Oki follow focus is the way forward despite the amateurish leanings of that device and the relatively poor performance compared to proper pro follow focus gears.

The FS700 certainly has 240fps and is 4K ready (at extra expense TBC, so too the date) – that is huge carrot Sony are offering over the C100. But I expect the C100, like the C300 to be cleaner than the FS700 in low light and with a finer grain of noise in 1080p too. It remains however an 8bit non-intra-frame codec (it is long GOP or inter-frame) so the Blackmagic Cinema Camera gives us that choice of 12bit raw or 10bit ProRes straight off the bat as and when we need it. Great to have a choice. It is likely the Blackmagic will have the better image quality in good light relative to the C100 (but from a smaller sensor).

The C100 has a ‘new wide dynamic range’ feature measured at 800%. I am not sure why they don’t measure it in stops overall, I have no clue what this means!

The camera maintains the LOG gamma mode of the C300, generous considering the half-price reduction.

The camera also maintains the EVF and an XLR jack.

The C100 comes out in November but it is likely Canon may choose to show pre-production models at IBC and Photokina in September.

I think this will be a very successful camera and I feel Canon have partially made up for the recent disappointments sub $15,000, hell even sub $4000. Although $8000 is still out of the hands of the masses, many more working pros will find a way to justify the investment than before and what Canon chose to cut out (the better MPEG codec, bolt on screen, HD-SDI) pales into significance compared to what they kept.