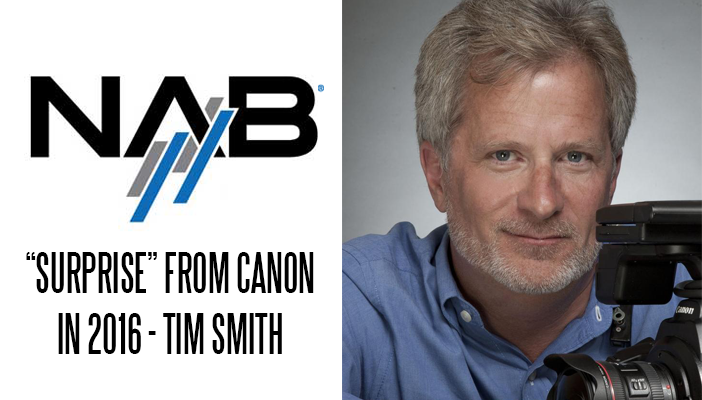 Tim Smith says we should expect to see “low cost, high quality offerings”, plus a “surprise” from Canon themselves at the show, which starts April 16th 2016.

The NAB Show has already interviewed Tim Smith of Canon.

The short chat can be found here.

The interesting bits are that Canon are firming up their development of 8K, HDR and ACES technology. In a few years the gap between stills and video quality will be even less due to 8K acquisition. The gap between what our cameras are capable of and what our screens are capable of displaying will reduce with HDR. Meanwhile ACES promises to standardise our workflows for colour grading in post and matching the look of multiple cameras on a shoot.

So that’s the long term future ahead, what about the near term?

“We will be showing not only our existing product line, with a few surprises”

Asked what he expected to see “trending” at the show:

“I think you will be seeing some low-cost high-quality offerings that open up many possibilities for both big-and small-budget productions.”

Finally Tim promises a working 8K camera from Canon at the show as well as 8K displays.

So a surprise from Canon eh? Word on the street is that it’s actually a toaster.

NAB is only 3 weeks away. I’ve yet to decide whether to attend, part of me wants my first experience of the US to be something other than the trade floor of a major camera show. (And it’s a long way!) I’d love to meet people there though! Anyway, what is clear is that there will be some kind of interesting new camera at the show, there almost always is. 2016 is also a Photokina year, where I expect the GH5 and 5D Mark IV to be announced. If these are anywhere near finished already (and in the case of the 5D Mark IV, actually a bit video orientated for once) we might get an advance preview at NAB instead. What’s more likely however is a model from Canon at around $3k to fill the gap between their unexciting DSLRs for video and the more exciting but very expensive Cinema EOS cameras. Cinema EOS has dabbled in the enthusiast market before, with the XC10. I don’t think that camera was on many people’s lists as a ‘must buy’ so we’ll wait to see if Canon fixes this at NAB. I certainly hope they will as Sony are running away with it at the moment.

Blackmagic have been centre of attention at NAB for the last few years. I am getting the new Micro Cinema Camera to review soon and until then we can speculate whether or not they will start making cameras for enthusiasts again. The URSA and Micro cameras have definitely been aimed squarely at pros whereas the original 2.5K Blackmagic Cinema Camera and Pocket Cinema Camera had huge cross over appeal! I miss those days from Blackmagic!

See you at the show! Maybe!