For me this is the most anticipated film of the year. I have mixed feelings about the trailer but beyond any doubt is that Roger Deakins has done an incredible job.

Reunited with Denis Villeneuve for the first time since Sicario, we have a formidable team on Blade Runner 2049.

“Do you like our owl? Artificial? Of course it is. Must be expensive. Very.”

It is indeed a bit artificial, and very very expensive. Fun though. Lots of fun, and ultra cool.

You will notice that there’s not an anamorphic flare in sight though.

For me this is blasphemy in the Blade Runner universe! None of the characteristic distortion or character the format brings to sci-fi. Roger Deakins shoots with plain old lenses. I think he needs to upgrade, because the original Blade Runner was one of the most outstanding example of anamorphic there is.

“Roger will create a corridor for the shot. He will work with the actors. When the blocking is done, when he decided to do one shot, the shot becomes a tableau. The light is specifically done in a very precise way, to work in a precise angle. You have to play in that. When the actors come into the camera, you want to start to cry. It’s so beautiful. It’s so powerful.” (Source)

Will the new film live up to the MASSIVE expectations people have for it?

Those images, together with the Vangelis inspired score – which I hope doesn’t turn out to be a Drive-lite adapted for sci-fi – were easily the best thing about the trailer.

The lighting. It really goes for everything that’s great about the original – huge diffused warm light streaming through windows, backlighting the actors. Contrast that eerie mood of the interior scenes to the electric night of the dystopian city exterior – still Tokyo inspired but less dysfunctional society this time, more war torn (by the way, I’d rather it were dysfunctional society, much more interesting for me).

Gosling’s character could turn out to have great chemistry with Ford’s. We’ll have to see how that turns out.

It seems to have avoided unintelligent handling by the studios to the degree that the director, cast and DP are all first rate.

The cyberpunk replicant girls are damn sexy… although I miss the 80’s hair, they look like two hipsters stumbling out of the Berghain in Berlin on a Monday morning.

The cyberpunk look for 2017 seems to be the same as it was in the 1980’s. Has it been evolved in an interesting way? Neon Atari logos (product placement ahoy!) in the first 2 seconds of the trailer would suggest not – and apparently references to the Soviet Union are still around in 2049 once you look closely and get past the shock of sitting through a 7 second micro-trailer for the main trailer (Facebook newsfeed autoplay has ruined trailers!)

“[Ridley] Scott created was a very rich universe. With his permission, we found out that it was space to create. I think [aesthetically], we tried to stay on the same planet. We took freedom with some elements. We had a lot of fun, Roger [and I].” (Source)

Probably nothing, but the eye shot is boring this time!! Compare the eye close-up in the trailer to the iconic one from the original – 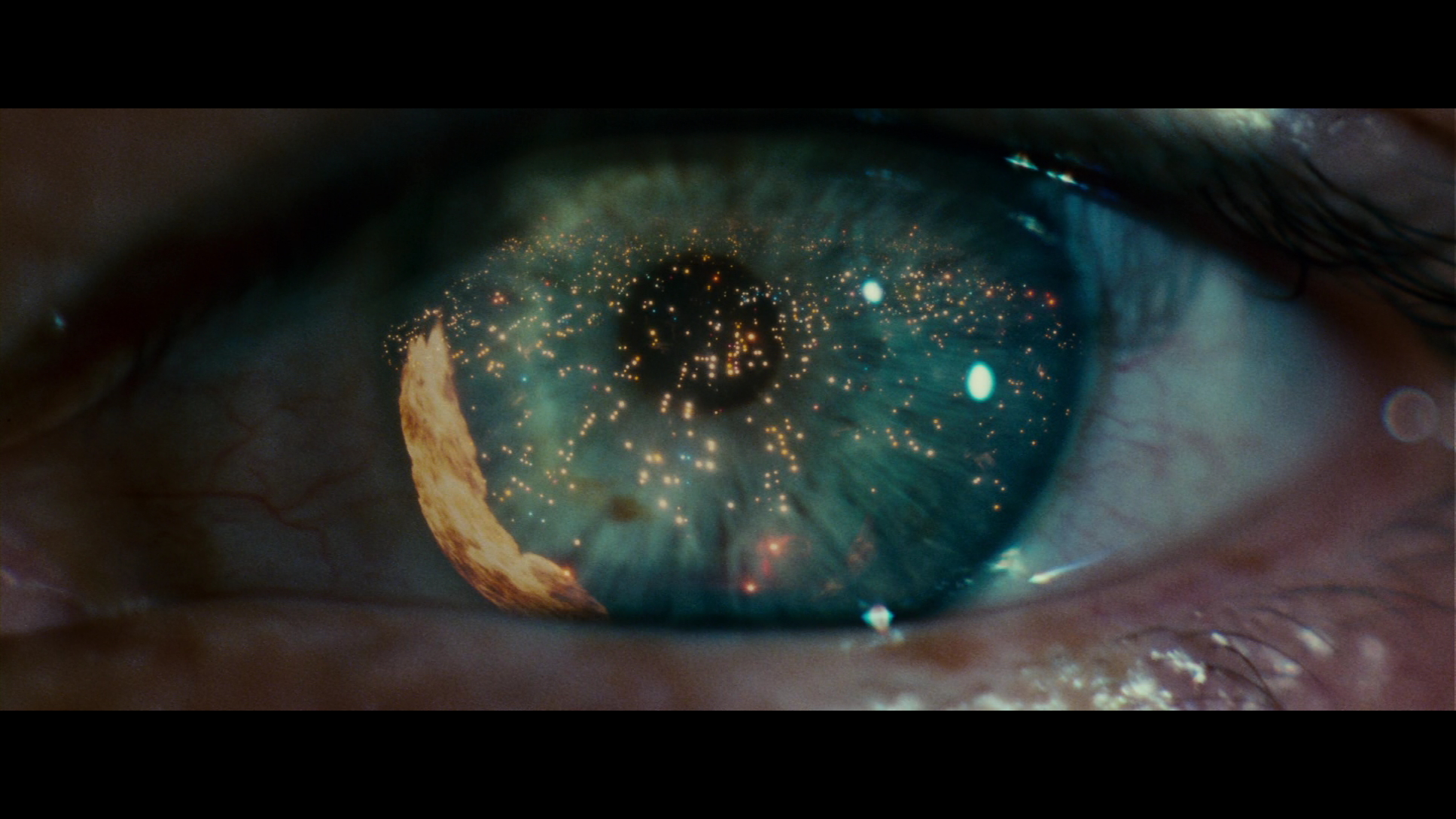 The original was more film noir than action movie for me. In this one, Gosling’s character looks like he’s having a really rough time in the film. Soiled and bloodied face constantly, like Stallone in Rambo! Too many action set pieces? Will it be another amusement park ride of a film with not enough quiet moments?

I do have some minor quibbles with casting Gosling actually – it’s not that he isn’t a superb actor, rather he doesn’t quite have the warmth behind the bristly swagger that Harrison Ford did in the original. He comes off more like a straight out psychopath at least in the trailer.

I am curious as to how Harrison Ford’s character turns out.

It feels a bit like his participation wasn’t guaranteed and they had two scripts. His appearance obviously serves the box office. Does it serve the story? He pops up like a piece of nostalgia in what should be a fresh take on the material. I’m in two minds whether this makes the film more compelling, part of me wanted a clean break. Blade Runner isn’t supposed to be Star Wars.

Denis Villeneuve is a very highly rated director. I did see Arrival, which posed the interesting concept of if you knew the future, would you take the same path knowing it would lean to pain? I found it pretentious though. Not half as original or un-cliched as it thought it was. It was seized upon and overhyped because it was a good concept and DIFFERENT. Let’s hope Villeneuve avoids making a pretentious Blade Runner 2049 and that it has REAL lasting resonance and substance.

An aside – Current era of filmmaking is poe-faced

The main career path for filmmakers is up through the commercial, advertising industry and it shows. A lot of films have the tone of a commercial trying to be relevant. Where are the happy accidents on a shoot, the spontaneity and the risk in the writing?

One overriding tone I find with modern films is that they all aspire to be nothing short of a masterpiece. Unfortunately the tone doesn’t have any resonance. A month later and I’ve forgotten what I saw, pretty much.

This constant grab for the stars is monotonous and there are many ways to be a masterpiece without meaning to be one.

Let’s remember films are supposed to be entertainment, a spectacle. Instead even with Superman we get hyper-realism with complex stories, subplots and ultra serious characters with all the witty writing taken out and shot.