Three of the most exciting cameras of the year, the Sony A7S, Panasonic GH4 and Samsung NX1 are about to go into a different league as far as video quality and monitoring go. The Atomos Shogun 4K monitor / recorder is now shipping ($1995 / £1220 + VAT) and one is on the way to me, scheduled to arrive this week. I plan to put it to use with all 3 of the aforementioned cameras. I’ll do a shootout comparing them. We’re unlocking as yet unexploited features like 4K mode on the A7S and 10bit 422 on the GH4. For the NX1 it will be useful to record straight to an editable format for a quick turnaround rather than having to transcode from H.265. I’m also expecting image quality gains across the board.

For the uninitiated, the Shogun takes an uncompressed 4K output via HDMI (or 12G SDI) and records this to a professional editing format like ProRes or DNxHD.

Each of the aforementioned cameras have their own unique advantages. The A7S of course is the most sensitive in low light and for the first time we’ll be getting full frame 4K off it, with S-LOG 2 being a distinct advantage as well. The NX1 is in many ways an interesting option for Super 35mm 4K as it over-samples the image from 6.5K in APS-C. The A7S only does true 4K in full frame, the APS-C crop mode is upscaled from 2.8K. PL cinema lenses adapt easily to the NX1 and most are designed to cover Super 35mm not full frame (such as the famous Cooke S4i range). Then there’s the GH4 which has the widest choice of lenses and adapters, as well as being the only one of the three with a 10bit output to the Shogun.

Atomos promise something quite special on the monitoring side too and in the video you can see the touch screen in action. I love the way you can drag the zoomed 2:1 focus assist around so quickly. That’s a 1:1 pixel view so super sharp as well, utilising a 1920×1080 window of the 4K sensor readout. The screen is such a high res panel, it may be that you can just nail focus directly from looking at the entire frame, without resorting to a MF assist like peaking or magnify.

Unlike the Convergent Design Odyssey 7Q+, the Atomos Shogun will take standard SSDs from Samsung, Kingston, OCZ, etc. so that makes it much more affordable. The other distinct advantage is the screen itself – 1920×1280 compared to just 1280×720 on the Odyssey. Whilst the 7Q+ does now take 4K via HDMI, it ships bare bones with just an AC adapter and is more expensive when you factor in the media. The Shogun comes with a plethora of extras including an XLR breakout cable and high quality flight case. This is designed by an Italian manufacturer Atomos have partnered with and is included in the price. 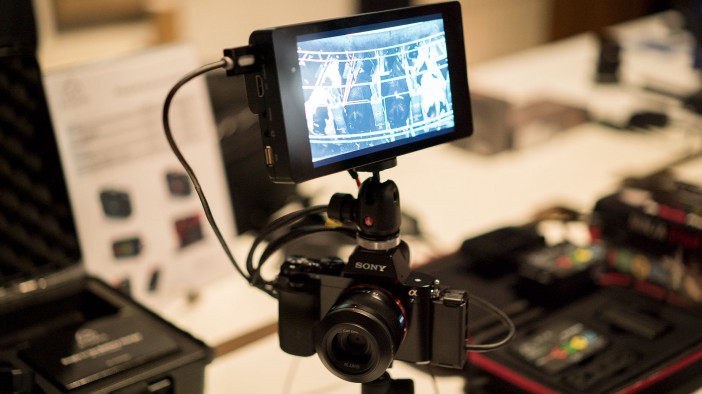 For cameras like the FS700 that do a raw output over SDI the Shogun can take this and record Cinema DNG, it also gives us a range of XLR inputs and support for 120fps in 1080p.

Something which I am very much looking forward to testing is the support for LUTs. When shooting S-LOG 2 on the A7S without the Shogun it is very difficult to get the correct exposure monitoring from the flat image. The Shogun will allow you to record in S-LOG but monitor in Rec 709 or with a LUT applied so you can see the final look of the footage whilst shooting. It’s a high end IPS panel as well so colour should be absolutely stunning on the display. Additionally Atomos offer a tool to calibrate the screen, with their Spyder device. Further useful features include a start / stop trigger so you can trigger recording on the Shogun the normal way with the camera’s video button, along with time code, WIFI remote control and optional CFast card adapter.

Check back for my first impressions in the evening of Thursday 18th December or Friday 19th.