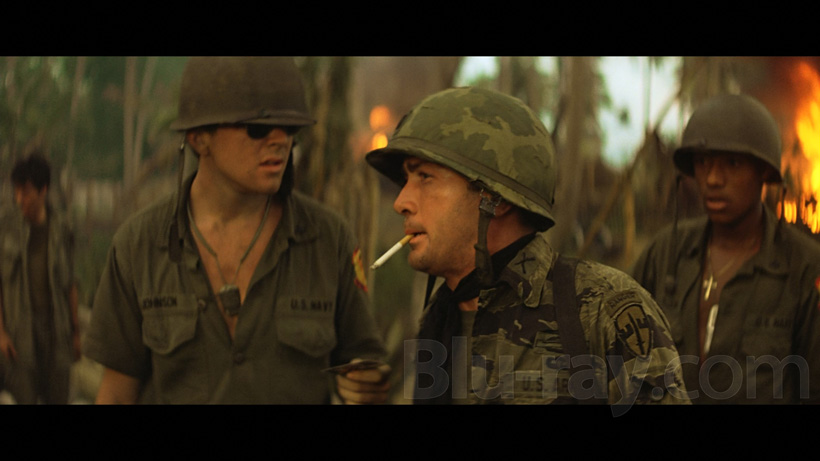 Above: Anamorphic frame of Apocalypse Now in 2.35:1 HD on Blu Ray

Francis Ford Coppola’s Apocalypse Now is to be released on Blu Ray in the original anamorphic format with which it was shot.

Shot with anamorphic lenses and transferred to 70mm for the theatrical release then came the heart breaking decision to severely crop the film for the standard 4:3 TV and video cassettes of the time, loosing 40% of the original careful framing and 40% of how the film was intended to look.

A compromise was later reached with networks for Francis Ford Coppola to release it in the letterbox format, but now for the first time we have the upcoming release of the film in anamorphic 2.35:1 in HD.

Thanks to Matt Holcomb of Holscope Productions who emailed me the frame grab above as a heads up. We’re both big fans of anamorphic shooting.

You can tell immediately that the shot above was lensed in anamorphic – the bokeh (background blur) is vertically stretched. Anamorphic was originally a technique to improve the vertical resolution and sharpness of the motion picture film frame because the image is compressed vertically (squeezed) to convert the standard 35mm picture frame into the wider 2.35:1 aspect ratio. The same can be done on DSLRs with anamorphic lenses and adapters. The unusual bokeh is an added stylistic side effect of the anamorphic lens.

The other great thing about anamorphic is the aspect ratio of 2.35:1 itself. The wide frame allows more freedom to direct the audience’s focus between the different elements that make up the composition of a shot or scene. In a cinema especially, the wide frame is more immersive, creating a wrap-around effect mimicking the peripheral vision of the human eye.

The third feather in anamorphic’s bow is lens flare. Anamorphic lens flare is unique and has long been a staple style of cinema, especially sci-fi. It gives flare an extravagant otherworldly feel. Whilst it’s true you can reproduce horizontal lens flare with optical filters and digital effects, nothing comes quite as close to reality. Each anamorphic adapter or prime lens has it’s own style of flare – and some flare more than others.

I have a rare Lomo 35mm cinema anamorphic lens on it’s way from Russia which I intend to create a look close to Andrei Tarkovsky who used the same lenses on Konvas film cameras. The anamorphic lens is actually in two parts – the front anamorphic sits atop a 35mm F2.5 Konvas OCT 18 mount lens (which can be converted to PL or Canon EOS).

Tarkovsky also used anamorphic zoom lenses which had the anamorphic glass at the rear of the zoom lens.