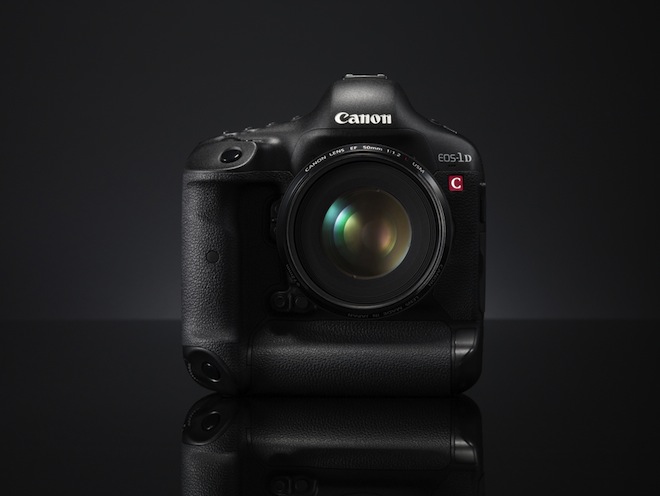 A few months ago I reported back what Canon had told me officially at Photokina – that the 1D C had some very minor hardware changes over the 1D X (like a headphone socket) but that the camera was fundementally the same camera with a firmware update to enable 4K recording. The Canon product manager was technically knowledge and utterly adamant this was the case, there wasn’t a hint of doubt in his eyes when I had this discussion face to face on the basis of mutual trust.

Later Canon were keen to point out I had got it all wrong and that the 1D C had a different circuit board, etc. etc. and was well worth your extra $6,000.

So why are there traces of 1D C firmware in the 1D X?

The Magic Lantern projects has given us a lot of extra firmware functionality for free, much of the stuff which should have been in the camera all along. Indeed many features are already in the camera and just need to be turned on. I suspect one such feature that should be in the $6k Canon 1D X is 4K video recording.

A few months ago Canon were very keen for me to toe the marketing line and retract what one of their own guys said at Photokina about the 1D C being basically a 1D X with a firmware update. So they set me up an interview with one of their product managers who didn’t really answer my questions but did say that the 1D C was different hardware and not a 1D X with a red C badge. Now the guys at Canon Rumours have opened one up to see for themselves, and the only visible change seems to be a larger heat sink. More signifcantly they say the 1D X firmware has traces of 1D C code and that the features are disabled.

Now the troubling bit – an anonymous source at Canon claims they would “bring the might of its legal team” to anyone that attempts to modify the features of an EOS-1 camera body at the software level, such as the Magic Lantern team. If this is true and I hope it isn’t, it is significant that they are prepared to go to such an extent to protect the 1D C. If the 1D X can’t do 4K with a firmware update (and I have always thought that was the game Canon was playing here) then why are they so keen to prevent a 1D series third party firmware update?

I must say Canon are showing really poor form over this. I’ve had discussions with Canon several times in 2012 which now in the cold light of day seem rather odd. Not just the stuff concerning the 1D X / 1D C similarities but the mysterious case of the 5D Mark III’s 720p HDMI output. I was told officially at Focus on Imaging in the UK last February – yes again by an actual Canon product manager high up – that the hardware just wasn’t capable of uncompressed 1080p, which I found hard to swallow. Now we have promises of a firmware update that will magically enable it – but not until April! Why wasn’t it enabled in the first place? Why have their product manager blatantly tell an untruth to me that the hardware couldn’t do it then actually it was just disabled in firmware? When your company’s official line is untrue, you have a problem.

All in all, this situation stinks.

When we buy a camera, a piece of hardware we want to be getting the full capabilities of that hardware and we want the production costs to decide the pricing. If I pay $6k more for a camera, there has to be a good reason for it. If I find out that my $6k went towards changing a line of code in firmware and adding a heat sink, I’d be annoyed. Equally, if I was a 1D X owner shooting rather poor 1080p on hardware that was actually capable of 4K in Canon LOG, I’d not be getting what I paid for in terms of the hardware and I’d wonder also as a 5D Mark III owner why my HDMI output was 720p not uncompressed 1080p like on the Nikon D800.

I don’t care about marketing or Canon’s business strategies but I do care about my 5D Mark III and 1D X being as good as they can possibly be, with nothing turned off in firmware.

As for Canon their reputation is at stake here. If when buying a Canon camera I am never sure if it is crippled to protect the one above it, I don’t have confidence in them as a company.

Firmware modification is generally legal but some hacking, like that done to open up the Playstation’s copy protection can be seen as assisting copyright infringement and piracy. Also firmware code itself is copyrighted like most software is. So was what Vitaliy Kiselev did for GH2 users illegal? Actually it was 100% legal. Vitality never distributed or sold or profited from modified firmware code. He simply built a tool, like the Magic Lantern team, to modify his own camera. In the same way it is not illegal to take apart your PC and upgrade the processor or tinker under the hood, it is not illegal to tinker with your own camera’s inner workings and reverse engineer it. In my opinion Magic Lantern should have nothing to worry about from Canon’s legal department no matter which camera they chose to modify.