Here I have rounded up all the lenses I have in mind for achieving a wide angle on the 2.3x crop sensor of the Blackmagic camera.

The Canon EF mount rather restricts this choice to lenses designed for photography. Most Super 16mm PL mount lenses are out (as well as being extremely expensive) as the diameter of the mount isn’t wide enough to accommodate their fat rear ends. Several lovely primes which can be had for around $800 are out – the Zeiss Distagon 8mm T2.1 S16 PL, Voigtlander 17.5mm F0.95 and Olympus 12mm F2 would have been lovely lenses on the Blackmagic Cinema Camera. C-mount (the Computer 12mm F1.3 would have been puuurrfect on this camera) is not to be, as is anything for Micro Four Thirds and Sony E-mount.

Here is how to think of the field of view at various focal lengths on the Blackmagic Cinema Camera using full frame as our guide. Wide angle on full frame starts around 35mm or 28mm. By 21mm it begins to get extremely wide. By 16/14mm you are looking at an ultra-wide standard lens or a fisheye. On APS-C 18mm is a normal wide angle. On the Blackmagic Cinema Camera you don’t begin to get a wide field of view until about 12mm! 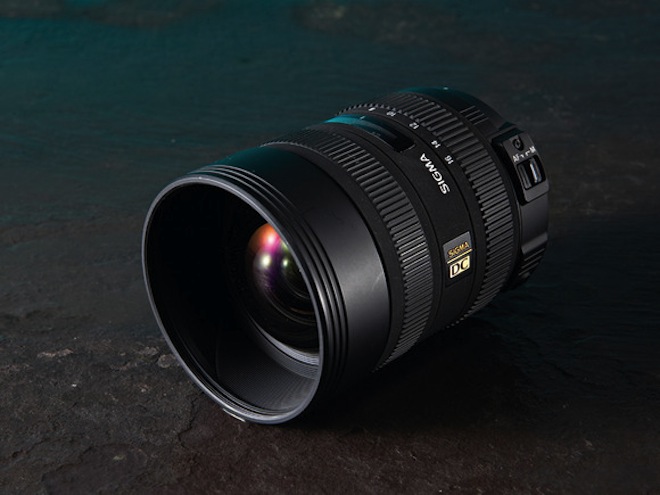 The Sigma 8-16mm is the widest non-fisheye lens for the Blackmagic Cinema Camera. See the review of Nikon mount version at Tech Radar

These lenses are nearly all designed for APS-C DSLRs. There are no Super 35mm PL or Super 16 movie lenses in this list. Hardly any PL mount lenses fit the Canon mount, and hardly any Super 16mm lenses cover the sensor as it is larger than Super 16mm.

The Canon 15-85mm will of course give you the longest zoom range – 35-195mm in full frame terms. But it lacks at the wide end compared to the superb Tokina 11-16mm F2.8 which is the equivilent of 25-35mm on full frame. That covers almost all the common wide angle focal lengths apart from the lesser used ‘ultra wide angle’. That is where the rather fantastic Sigma 8-16mm comes in – if you don’t mind the slower aperture this is well worth a look for that 8mm wide end. That remains truly wide on the Blackmagic Cinema Camera at 18mm equivalent on full frame! The only lens this wide on the market for the Canon mount and well worth a look even for owners of the 11-16mm F2.8. Of course at 8mm it isn’t 100% distortion free but it distorts far less than the very expensive 8-15mm Canon L fisheye lens which is designed for full frame.
The Nikon 14-24mm F2.8 stands out as desirable but only if you want the longer end of the zoom relative to the Tokina 11-16mm whilst maintaining the relatively fast aperture of F2.8. That it is also a constant aperture helps if zooming during a take. It does however come with a hefty price tag, double the Tokina lens. The Tokina’s long end goes to just 37mm equivilent, whist this will take you to nearly 60mm on the Blackmagic Cinema Camera. The Nikon 10-24mm F3.5-4.5 is also highly rated. It is a sharp lens and can be had for close to the price of the Tokina 11-16mm. However the aperture is less attractive.

There’s a real lack of good, fast wide angle primes for APS-C but the Blackmagic’s smaller sensor makes the situation even tougher here.

These are the widest and fastest primes for APS-C that aren’t fisheyes.

Pretty small list isn’t it? 14mm gives you a field of view of effectively 32mm on the Blackmagic’s crop sensor, so not that wide. For 28mm you need a 12mm lens. I couldn’t find any APS-C Canon mount primes in this focal length. The Samyang is distortion central on full frame and APS-C but it will be interesting to see how the centre of the lens holds up on the 2.3x crop sensor, i.e. better – but still not great. It is however very cheap and has solid build, good focussing and a constant aperture. The Sigma equivalent on this list I have not yet tried, but it is more expensive.

The Pentax 14mm F2.8 DA is the best of the 3 optically but it is double what the Sigma 14mm F2.8 costs! The Tokina 11-16mm F2.8 is a better option than every one of these lenses so I cannot recommend a prime.

Interestingly Tokina have a fisheye zoom lens so Canon is no longer unique in this regard. This is a lot cheaper as well and actually has a slightly faster aperture at the wide end. It is not designed for full frame like the Canon but it will give you a 23mm fisheye at the wide end on the Blackmagic Cinema Camera. Could be an interesting look. Here’s how this lens looks on an APS-C 1.6x crop sensor. I’ve boxed out the Blackmagic’s 2.3x crop field of view in the centre. Remember crop factors are always measured over full frame which is 1.0x. 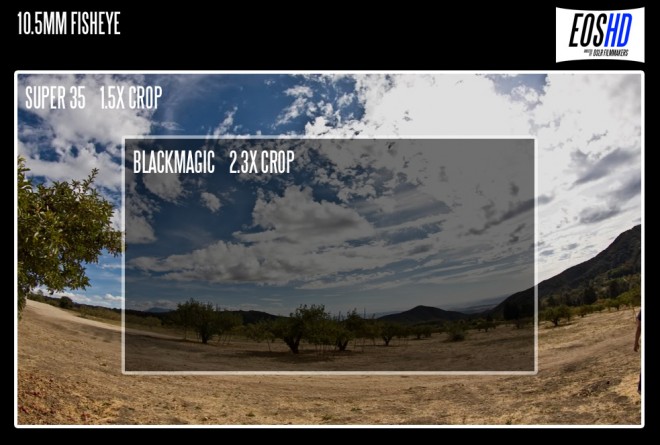 Anamorphic lenses compact more field of view into the sensor, squeezing more in horizontally from the lens. The field of view vertically remains unchanged. Of course anamorphic lenses also produce a more cinematic aspect ratio, more cinematic lens flare and a classic hollywood style stretched bokeh. The lenses also allow you to get a wider field of view without the slow aperture that usually goes with a wider focal length, and the Iscorama lenses avoid breathing when racking focus as they transfer the focussing mechanics to the anamorphic away from the photographic prime. In short they are stunning, but rare and good ones can be expensive. 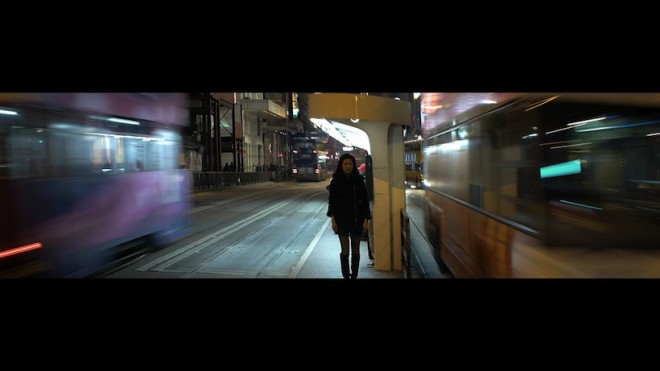 I’ve done a comprehensive book on these lenses, purely for the fact I love the look so much. Check out the EOSHD Anamorphic Shooter’s Guide here

Unlike for DSLRs, until I have tried my collection on the Blackmagic Cinema Camera, the following advice is only provisional so please don’t act on it yet…

My instincts tell me that the maximum wide angle you will be able to get way safely without vignetting on the Iscorama 36 1.5x or a Kowa 2x is around 25mm. I’m yet to verify if a 20mm lens will work. It may do with the Iscorama 36.

Unfortunately the OCT 18 and OCT 19 LOMOs, even when converted to PL, won’t work with the Blackmagic Cinema Camera. Only a handful of PL and OCT 19 mount lenses fit a Canon mount.

So what field of view would a Kowa 2x get you at 25mm?

This would be 12.5mm horizontally and still 25mm vertically.

That amounts to effectively 28mm wide angle from side to side but a standard 50mm portrait field of view from top to bottom.

This should be really attractive.

As for aspect ratios, unfortunately Blackmagic didn’t implement the full 4:3 active area of the sensor in the final product, only a 16:9 crop.

With the Iscorama you will get the wide aspect ratio below…

I have grown to love the wider 3.55:1 look even if it is a bit extreme and when you view it on a standard 1080p 16:9 display you do have rather large black bars.

If the Iscorama 36 goes on a 20mm lens without vignetting this will also be interesting as it will yield approximately 14mm across – roughly 35mm standard wide by full frame standards.

Your aperture is unaffected so find the fastest 20/25mm lens you can get that fits the Canon mount. Micro Four Thirds offerings like the superb Voigtlander Nokton 25mm F0.95 would have been beautiful but again thanks to the Canon mount they are out!

The Samyang 24mm F1.4 springs to mind as a particularly strong candidate for anamorphic lenses on the Blackmagic Cinema Camera but I’m hesitant in recommending it before I’ve actually tried it on the camera with my anamorphic collection. There’s also the Sigma 20 / 24 and 28 F1.8 which are all good value for money. 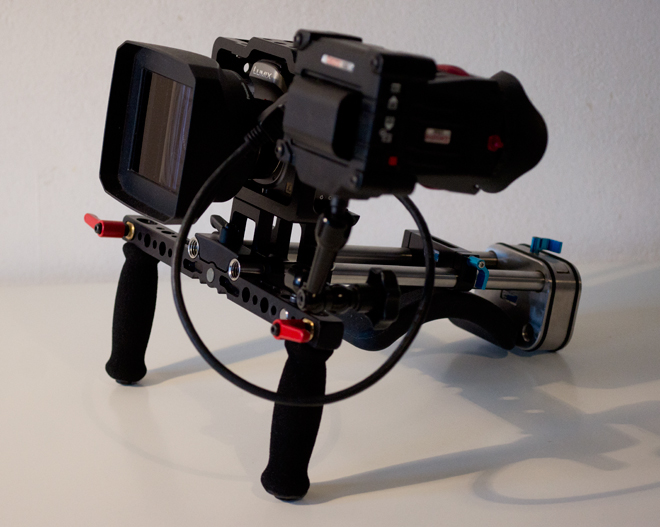 The Panasonic LA7200 anamorphic is an even better choice for wide angle as it won’t vignette until around 10-11mm on the Blackmagic’s sensor. So it will likely work even at the widest end of the Tokina 11-16mm F2.8. That will give you a seriously wide field of view both vertically and horizontally. It has a 1.33x squeeze yielding an 8mm field of view from an 11mm lens across (18mm in full frame terms) and 11mm from top to bottom, with an F2.8 aperture. 8mm F2.8 is as wide and as fast as it is possible to get on the Blackmagic Cinema Camera right now.

The most appealing lenses for me are the Tokina 11-16mm F2.8, Sigma 8-16mm and of course the anamorphics.

For those who can afford it, the LA7200 and Tokina 11-16mm F2.8 will give you the most cinematic, widest and fastest image available on the Blackmagic Cinema Camera. For around $1800 though, this combo sets you back more than half of what the camera costs. Is it worth it? I’d say yes but to maintain an anamorphic look through other more standard focal lengths you really need an Iscorama and these are $3000+. You can crop to the right aspect ratio but the shots won’t have the same consistency or same appeal throughout the timeline if you mix standard aspherical shots with real anamorphic. Real anamorphic is real anamorphic. It has a certain look that can’t be mimicked.

If you need the widest possible field of view on a budget then the Sigma 8-16mm looks very appealing. With a maximum aperture of F4.5 it is not going to be good in low light though. The price  is around $800.

If you can only buy one lens get the Tokina 11-16mm F2.8 for approximately $750. The constant aperture is essential if zooming in the middle. It also helps greatly in low light.