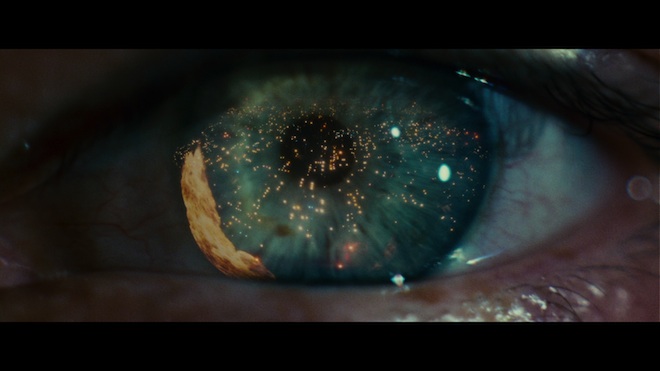 Ridley Scott will direct the sequel to Blade Runner soon and a screenplay is currently being prepared. Find out what Scott and cinematographer Jordan Cronenweth were thinking when they shot the incredible original with anamorphic lenses.

In preparing to shoot Blade Runner, Ridley Scott told his cinematographer Jordan Cronenweth that the photography of Citizen Kane best suited his vision for the film. Says Cronenweth – “This included, among other things, high contrast, unusual camera angles, and the use of shafts of light.”

Part of the reason Blade Runner resembles the great Asian cities like Tokyo is due to the overcrowded streets and abundance of neon lights. In fact rather than use normal film set lighting for the most part Scott had a 7 man crew overseeing numerous rented neon signs. The signs in-frame were on dimmer switches and turned down to the point where they’d just begin to flicker. The flicker was more attractive and the dimmer switch avoided blown highlights so that they maintained a vivid colour on film. Off-frame neon signs were ramped up to full brightness so that they bathed the set in a neon glow from afar.

For many years after its release in cinemas Blade Runner was shown in a pan and scan format on 4:3 TVs. Brett Sherris of 80’s magazine Videofax remarks for the first time on the new Laserdisc transfer of Blade Runner in all its anamorphic glory.

“One of the most interesting surprises that one immediately notices upon seeing the entire Panavision anamorphic frame is how cinematographer Jordan Cronenweth frames his characters either screen left or screen right – rarely centred. This aesthetic is reinforced by a lighting design that places the characters half in light, half in shade. This motif gives the impression that all concerned are living their lives on the fringe – an existence that is perpetually off-balance. The anamorphic laserdisc transfer of Blade Runner makes an excellent case for the idea that when a portion of the frame has been left empty, it may be intentionally so.”

With the exception of this Philips TV (coverage at EOSHD), the TV standard today is 16:9 unfortunately. I think Brett sums up what anamorphic gives you as a cinematographer. It supercharges the attractiveness of the rule of thirds and gives you more room to play on the emotions of characters, isolation and dead-space. In other words, it is simply more dramatic.

Flaws can add to the film

On the Los Angeles set for a chase sequence where Deckard chases a replicant through several glass shop windows Ridley Scott struggled with the lighting until he decided to take some of the neon lights from outside and put them into the store window itself. The very high brightness of the lights allowed for high frame rates so Scott and Cronenweth decided to shoot the memorable sequence in slow-mo to better capture the shattering of hundreds of shards of glass and the flailing limbs of replicant Zhora. The only problem was that the high shutter speeds required caused a visible flickering effect on the neon signs. Rather than abandoning the slow mo Cronenweth decided to use the ‘pulsing’ as an element of the chase. To always aim for a 100% perfect shot setup is not always the right choice because flaws introduce creativity.

The future setting of Blade Runner allowed the director and cinematographer to be more elaborately stylish. “Since the film is set in the future, unusual sources of light could be used where one would not accept them in a contemporary setting. For example, many of the people on the street set carried umbrellas that had fluorescent tubes incorporated in their shafts, providing a light source which could create a glow on their faces.”

(I actually like this idea for an umbrella maybe I should start a Kickstarter campaign).

In the pre-workstation CGI geek era of filmmaking, control over special FX were micro-managed and every frame was touched by hand and far less clinical. This slow process also gives the director far more control over what is on screen and the ability to see immediately what affect the camera, lighting and composition has in unison with the effect. Says Blade Runner DP Cronenweth:

“One of the identifying characteristics of replicants is a strange glowing quality in their eyes. To achieve this effect, we’d use a two-way mirror — 50 percent transmission, 50 percent reflection — placed in front of the lens at a 45-degree angle. Then we’d project a light into the mirror so that it would be reflected into the eyes of the subject along the optical axis of the lens. We’d sometimes use very subtle gels to add color to the eyes. Often, we’d photograph a scene with and without this effect, so Ridley would have the option of when he’d use it.”

Any DSLR shooter can try this. The cinematographer on Blade Runner had a specific technique for lighting characters. Cronenweth would use a bright backlight to give a sharp high contrast edge to the character and a dramatic sense of atmosphere and location. He’d then use a soft dim frontlight on the actors’ faces to better emphasis their humanity and vulnerability. This from an interview with ASC Magazine…

Cronenweth: “I can never use enough backlighting. It’s just that some directors want to see the actors’ faces. I keep telling them that the audience only goes to see the sex.”

ASC Magazine: “The cinematographer is as interested in creating mood or an effect as he is in lighting an actor’s face.”

For Cronenweth there was one exception where he’d use hard frontlighting on Blade Runner. “I love hard light in the face if it is overexposed. I think that’s beautiful. It’s different; it’s unusual. It’s exciting; it’s violent.