Find out more about anamorphic shooting in my book, the EOSHD Anamorphic Shooter’s Guide 2nd edition

I was in Shanghai for most of November. Shanghai is a monstrous megapolis of concrete really and not quite what I was expecting. It is FAR rawer than Tokyo or Taipei and a lot of the old cultural relics have been swept away – but it was a very interesting place to visit and to film footage in. Down the road there was the Jade Buddha Temple in Jing’An district which is part tourist destination part temple of worship for the local Chinese, I took a look inside…

Since filming by stealth at the Longshan Temple in Taiwan with the GH1 (where pro video cameras weren’t allowed) I’ve always wanted to capture the beauty of these places with anamorphic cinemascope on a video camera.

This Buddhist temple had a regular daily ceremony involving monks, and fires outside where the public can burn incense and send their wishes to one of the Buddha Gods at the temple, for example there’s one for health, one for wealth and so on.

When pairing an anamorphic widescreen lens with a nice fast prime, you throw the logic book out of the window. What you should look for is the simplest and most primitive optics with the least coating. The Helios 44M is perfect for this. In my opinion what sterile digital HD takes it out the Russians manage to put back in so there is always something of dark age USSR origin lurking in my bag.

Another reason I like the Helios for widescreen anamorphic shooting is that it has a duel aperture ring with one of them de-clicked. Set the aperture to, say, F8 with the clicked ring and you can then smoothly open it up from there to F2 with the de-clicked ring. I found it useful for slight quick adjustments. For $20 it doesn’t exactly have the feel of a Duclos but it is nice to have!!

Of course the anamorphic lens itself is not as cheap as the Helios. But 2 years ago I did manage to pick up the Isco CentaVision for £100 in the UK. It is a very rare 2x rebadged Iscorama 42 made for order when most Iscoramas are 1.5x and back then the seller at the time wasn’t aware of its value or that it could be used on DSLRs. There are still deals around like this particularly at places outside of eBay. 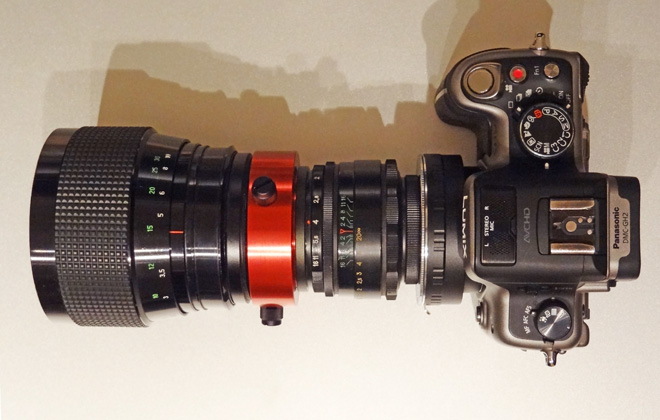 4:3 MJPEG is not quite there quality wise with AVCHD in terms of resolution although it does have high bitrates up in the 100’s. It is 30p though and I wanted 24p for this. For some projects I think the less extreme 2.66:1 works well, for others 3.55:1 can be beautiful. What I do think is for sure is that they both look better than 16:9 and when I look at my 16:9 footage shot at the Jade Buddha Temple versus the anamorphic stuff it really is a no-contest, the 16:9 stuff just feels so much more like video and the anamorphic widescreen (especially when black bars are visible) looks like cinema.

I also find it interesting that although there’s no horizontal flare or much bokeh with these shots, the anamorphic optics still adds something ‘different’ into the mix. I can’t quite put my finger on it but I know when I see it.

Focussing is easiest on an Iscorama

In terms of the raw image quality on display here from this $20 prime and (rather more expensive) Isco anamorphic you can shoot a video like this with a $500 Kowa 2x anamorphic as well, since that has a very similar look to the Isco CentaVision if not actually a bit sharper at fast apertures. But the reason Iscorama lenses are now worth $3000 and the Kowa $500 is all in the patented focussing mechanism. The German engineers at Isco were able to design a system where the prime is set to infinity and you only use the focus ring on the anamorphic. Isco designed this lens to be both for projection and image taking and dual focussing is fine for projectionists but for filmmakers setting up multiple shots this way is just not very practical even if you have a lot of static scenes with fixed focus.

That focus ring on my Isco has an extremely long travel which makes for great precision (but can be tricky to adapt to your follow focus gearing when racking focus during a shot). I decided to stop down to F4 for many of the shots, not because of sharpness but because I wanted a less shallow DOF with more of the architecture and monks in focus. I do love the look of shallow DOF but when it is overused in an unskillful way it becomes cliche ridden and a bit boring, so you should always judge what is best for the shot and not automatically go as wide open as you can, especially with anamorphics which benefit more than other lenses in terms of sharpness from being stopped down.

Which adapters are best for anamorphic?

In terms of adapters used for the shoot I have the RedStan anamorphic clamp (custom made in the UK). These cost around $100 here. But one important thing here is to find a M42 to Micro Four Thirds adapter which isn’t utterly rubbish. There doesn’t seem to be one with a tripod mount on yet, though there are for the NEX and for other lenses such as EF. So I went to a shop in Shanghai (Xingguang Photo, near Luban Metro stop) where I could actually try some solutions and see what the quality was like before buying. I ended up getting a Canon EF to Micro Four Thirds adapter with tripod mount and another M42 to EOS ring. Now this I found, was loose. It turns out you need to get a screwdriver and bend a piece of metal out from a notch inside the EF adapter to Micro Four Thirds to make for a tighter mounting twist, then the silver M42 ring stays put and doesn’t jangle around. Since I was out in China and couldn’t find a good quality adapter I don’t really recommend the same approach if you can get hold of a better quality adapter but I have found it impossible to find one with a tripod mount, for example the Novoflex M42 to Micro Four Thirds mount adapter is well built and $89, but useless for large heavy lenses and anamorphic.

A note on editing

I am now exclusively using Adobe Premiere Pro CS5.5 instead of Final Cut Pro and I have not yet found a way to crop the video to 1920×520 anamorphic when exporting out, oddly the crop feature doesn’t seem to do anything. But I have found that I prefer to have the black bars than the silly looking slim playback window on Vimeo when it is uploaded to there. So the video is actually 1920×1080 in full with borders rather than anamorphic sized.