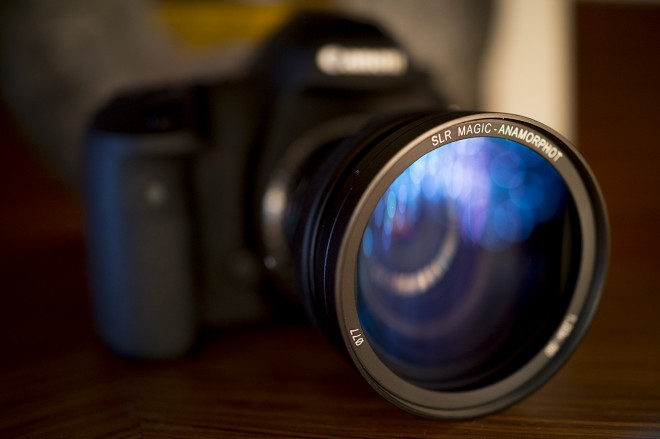 The lens I used predominantly for the Bunny Suit band shoot was the Canon 35mm F2.0 IS. This lens has internal focus and ultra sonic image stabilisation. The internal focus means the front of the lens doesn’t move which is handy when you have an anamorphic attached to the front filter thread. Nothing to drag on the focus mechanism. The image stabilisation is very effective for shooting in a minimal handheld manner as above. The video above was lit with just one light – the Switronix Bolt LED panel (EOSHD Review here) and shot on the Sony FS100 at ISO 3200 to 6400. I was shooting wide open much of the time and the lens is beautifully sharp at F2.8.

Speaking of beautifully sharp at F2.8 the Anamorphot is stunningly crisp on the Canon 40mm pancake. That’s a nice affordable lens to go with the Anamorphot and with the added bonus of AF for quicker single shot setup or racking through a range with the 70D’s new AF system in video mode.

Why do these lenses seem to work so well with the Anamorphot?

According to Andrew at SLR Magic, anamorphic adapters benefit from having the entrance pupil of the lens (the part of the lens where the aperture blades usually are) as near to the front element as possible. A pancake for example is constructed by definition as a short flat lens where the elements are close together. There’s a very short distance between the front element of the Canon 40mm F2.8 and the entrance pupil. The rear of the anamorphic therefore can sit as close to the prime lens entrance pupil as possible. The anamorphic adapter also benefits from a small front element on the prime and some lenses have very large front elements, larger than even the 50mm rear element of the Anamorphot 50 (or 36mm element on the Iscorama 36).

However the disclaimer is that some physically much larger lenses like the Sigma 18-35mm F1.8 and Canon 35mm F2.0 IS still work very well because they use an optical design where the entrance pupil / aperture blades actually sits quite far forwards in the construction, certainly forwards from the middle in the case of the Sigma.

Then behind the entrance pupil they have a lot of advanced optics which clean up the aberrations. 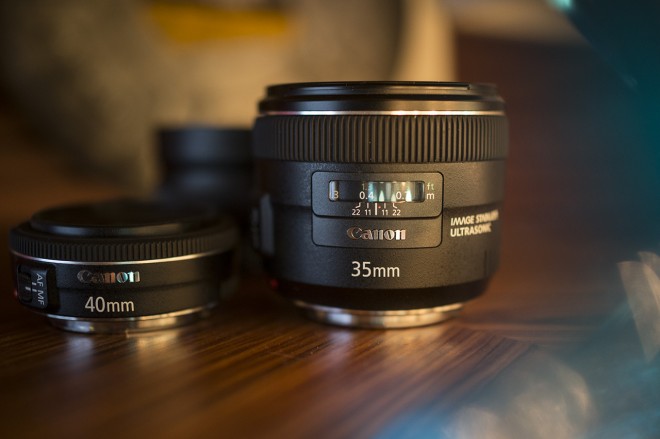 This lens was a key reference point in the design of the Anamorphot so with this lens you get a guaranteed performance. Sharp at F2.8, OK at F2.0 and a more dreamy look at F1.4.

Since you focus only on the prime with the Anamorphot 50, you can take advantage of the cine lens gearing of the 35mm F1.4 here. 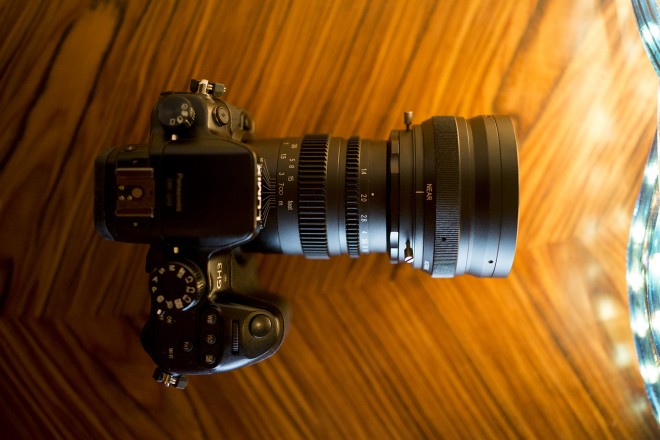 This lens performs superbly at F2.8, sharper than the Zeiss 50mm F1.4 ZE (see below) at the same aperture. In terms of construction this is a lovely flat pancake of a lens best served with the 5D Mark III.

The advantage over the Canon 40mm F2.8 pancake in that the focus ring isn’t fly by wire and has hard stops. Also since the front element moves mechanically rather than via stepping motors, the front element tends to be more firm whilst focussing and there’s no stress on any motors driving the barrel forwards and backwards.

With this lens it’s even thinner than the Canon pancake so you can get the SLR Magic Anamorphot as close to the camera body as possible. The combo actually feels more like a prime lens on it’s own, though the extra stepping ring I’ve used in the photo below does add a bit more to the pancake than is absolutely necessary. A highly recommended lens for the Anamorphot! 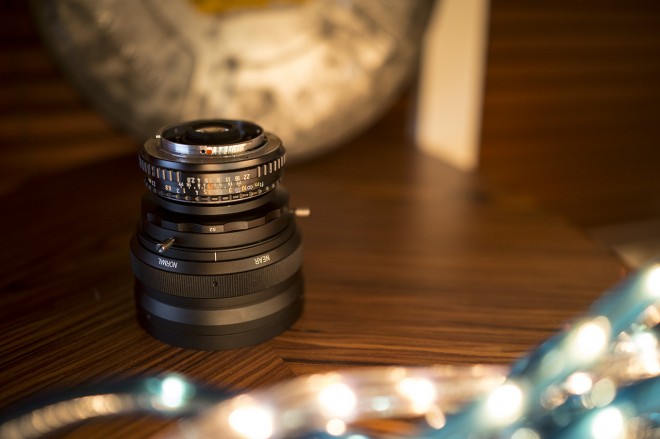 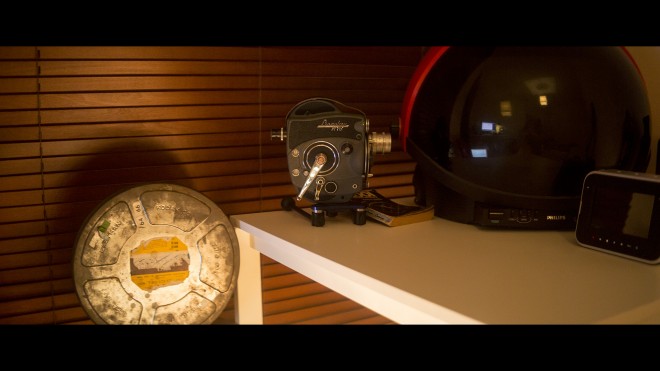 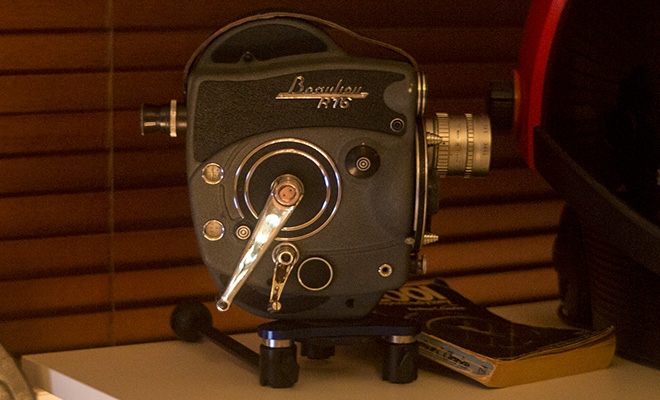 With this lens on the standard Super 16mm 2.88x crop sensor of the Pocket Cinema Camera the Anamorphot covers the entire range from 18-35mm with no vignetting and is very sharp at F2.8.

When paired with the BMPCC Speed Booster (1.74x crop equivalent) the Anamorphot 50 covers perfectly at the 35mm end but vignettes at 18mm to 24mm.

The good news is it’s very sharp stopped down just a little from F1.0 on the Speed Booster so this is a nice low light combo.

Usually zooms don’t work too well with anamorphic lenses as the entrance pupil is closer to the rear of the lens than the front and the distances greater.

This lens is an exception so yet another reason to treasure the Sigma for it’s unique magical properties!! 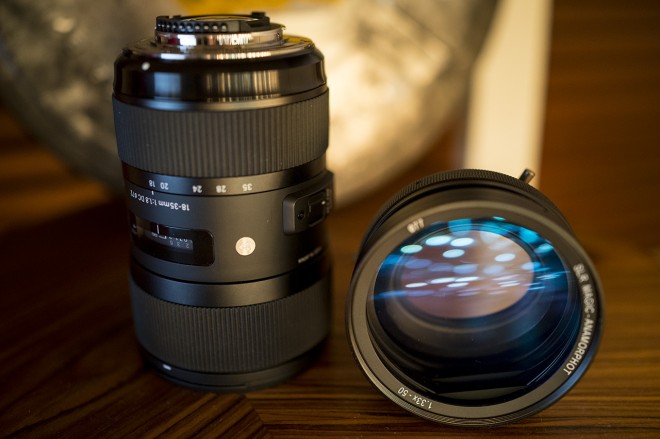 In my experience especially with the Iscoramas, simple cheap optics and lenses with small front elements work well with anamorphic lenses. I think it’s because one of the side affects of having a simple optical design with only 4 or 5 elements is that the entrance pupil usually ends up quite close to the front element of the lens and not far from the anamorphic adapter.

But there are complex lens designs that work well with anamorphic adapters like the Sigma 18-35mm F1.8 mentioned earlier, which has a huge number of elements but luckily more of them behind the entrance pupil than in front of it.

So although SOME posh glass from Leica and Zeiss does tend to be complex AND a good match for anamorphic, the lovely 50mm F1.4 ZE isn’t one of them to be honest. Good performance does begin to set in at F2.8 but as expected it is very soft at F1.4 and F2.0. This actually mirrors my experience with the older Contax Zeiss lenses. The 50mm F1.7 and 85mm F1.4 were never top performers with my Iscorama unless significantly stopped down.

The Contax Zeiss 45mm F2.8 pancake however is one to watch out for. It should work very well with the Anamorphot 50. 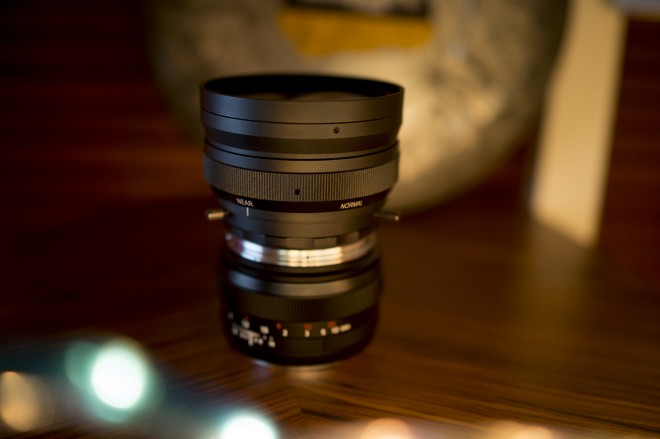 The Anamorphot is very light so doesn’t interfere with the zoom mechanism on the RX10’s Zeiss lens. It attaches straight on as it shares the same 62mm thread as on the Zeiss.

It works between 55mm and 200mm in video mode however beyond the 100mm mark it does go very soft at F2.8. You need to stop down to F5.6 or even F8 if using it at telephoto on the RX10. With SteadyShot in active mode which crops the sensor slightly, you can go as wide as 45mm on the Zeiss zoom. Usually anamorphic lenses don’t go well with zooms and certainly primes on a DSLR will give you sharper results at faster apertures but it’s kind of unique to have a zooming anamorphic on a bridge camera isn’t it? 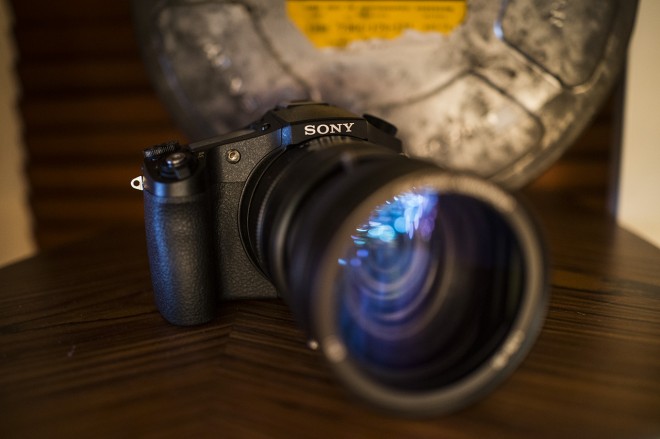 The volunteer program has now closed and SLR Magic are preparing for actual pre-orders. When these start you will be the first to know on EOSHD.