Filmmaker Andrew Wonder (Undercity) has had some interesting modifications done to his Iscorama. Not a cheap modification but re-housed as a cinema lens by Van Diemen and optimised for closer focus.

The test above is shot on the 5D Mark III and there’s more from Andrew below, on his ‘Wonderscope’ anamorphic.

First take a look at the sample video above – I see that Andrew has one of the classic Iscorama lenses with hardly any coating. This means the lens flares beautifully with the classic Blade Runner style horizontal flares. My Iscorama 36 by comparison isn’t as sensitive to flare-ups. This is a little odd as it doesn’t have the ‘MC’ moniker on the front to indicate multi-coating like many of the Iscorama lenses do. My 2x Isco CentaVision is ‘MC’ and hardly flares at all! The only drawback of the older Iscorama 36 lenses that flare up wildly is that you do get some ‘egg shaped flare’, where the corners glow, leaving a bright vignette around the frame.

You can avoid this by using a crop sensor or a longer focal length. 50mm is right on the limit for full frame, but I actually find some vignetting rather attractive.

Here’s what Andrew had to say on his blog about the modified lens.

“Since Undercity came out one of my favorite DSLR websites has been Andrew Reid’s EOSHD.com. His passion for anamorphic photography combined with his no hold barred reviews have always been an inspiration. I would keep seeing his work and reviews (I have even bought his anamorphic guide a few times) and hoped there was someway to make my Isco 36 work with my style of shooting. After reading his article about the RedStan’s rehoused anamorphics (check it out here) my hope was rekindled. I did some hunting online and figured out that Christopher Smith and the team at Van Diemen had put the lenses together for RedStan (I recognized the design patten from some phenominal rehoused Leica lenses of theres that I had used a few years ago).”

“The best part of this modified adaptor is that it will fit directly onto 52mm or 58mm lenses without an adaptor and the close focus was shortened to 3’10”.

“I waited by the door for DHL all day and put the lens on my 5D3 as soon as I could rip it out of the box. I attached it onto my 40mm Ultron lens which was a perfect combination (note on the test the lovely red circles it adds to the flares) but the 40mm vignettes on the full frame sensor on the 5D3 (which Andrew warns you in his well worth the $20 anamorphic shooters guide). Tomorrow I’m going to buy a Nikon 50mm f/1.2 from Adorama or B&H (haven’t decided yet) and see if it does better with my 5D or the 1DX I’m about to start testing.” 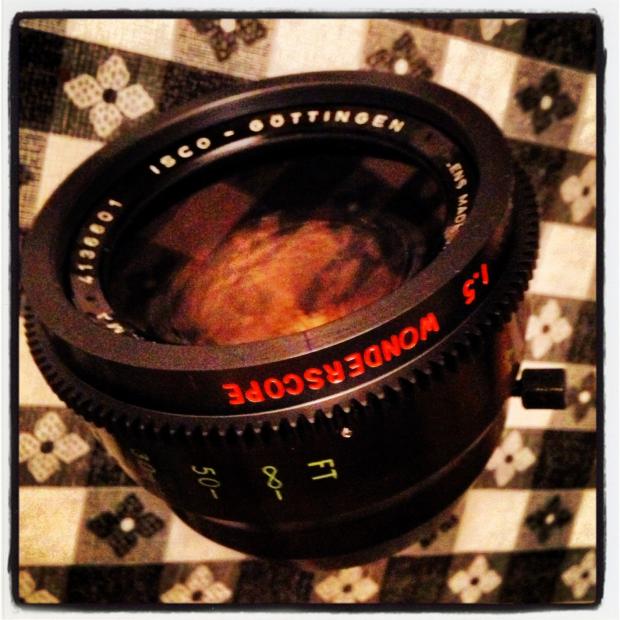 Both Andrew’s Wonderscope and RedStan’s modified Iscorama collection are in my view better all-rounders than the Lomo square front lenses. You can rack focus and they don’t breathe or do weird things like changing the squeeze factor depending on focus distance! They are optically superior in terms of sharpness at fast apertures, corner sharpness, less distortion and less ghosting. The ability to use an Iscorama on a variety of primes is also an advantage as you don’t need to buy 3 expensive Lomos to cover 35,50 and 85mm – just one anamorphic and 3 primes.

The Iscorama I find tends to work best with quite basic primes, it seems to be the simple optical formulas which work best such as the Helios 44M 58mm F2 or the Nikon E-Series 50mm F1.8 from the 70’s. These lenses are dirt cheap! But I’ve had some nice results from Leica R glass and Iscoramas too.

The Iscorama needs the prime set to infinity – but it actually works best on most lenses if it is set near to infinity, not right bang on infinity. I get sharper results that way.

Next up on EOSHD I have some interesting news on a potentially all-new 1.33x anamorphic lens on the market designed from scratch – check back soon for more info on that and a sample video shot on the GH2 with the lens.