The new 9.9 by 6.6 inch Mac Pro is the height of a bottle of wine and diameter of a cookie jar. Cutting edge in terms of technology it’s also a radical departure from the old models in terms of design and in my view it is going to be a huge success though I’m expecting an equally huge price tag.

Even those who are critical of Apple’s ‘lack of innovation’ lately have to admit this is pretty special.

Rather than have a fan and heat sink on every major component like in a PC, the new Mac Pro has a triangular unified thermal core at the centre with each component in contact with it on a different side of the triangle (via thermal paste). It then has a single fan to pull air through it. That is a genius design and surprising nobody else has done one on a desktop computer until now. It’s so simple but makes so much sense. That allows for Apple to reduce the size of the unit dramatically and put the components far closer together. 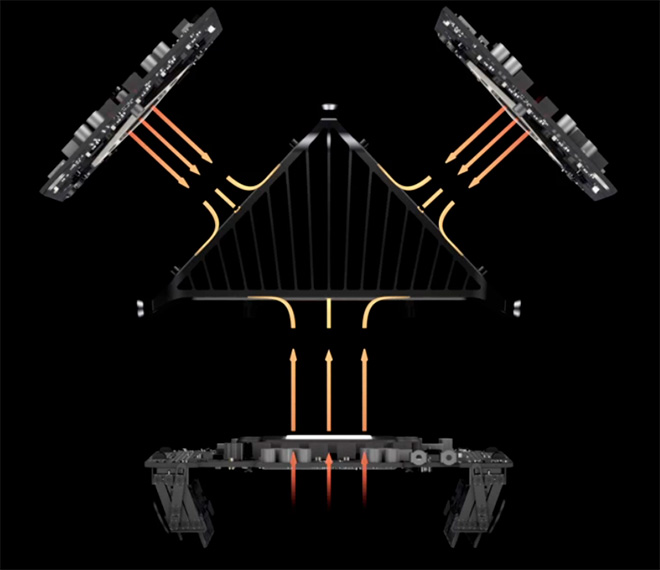 This design allows for efficient cooling even if one component (like the CPU) is sitting idle and another (GPU) working hard. In such a scenario the GPU would have the use of the huge heat sink and fan almost all to itself.

The new Mac Pro also innovates on internal storage with an SSD / flash memory drive with double the performance of a standard SSD. Rather than using a SATA connection it sits on a third generation PCIExpress bus and works at over 1.2GB/s. That compares to maximum read speeds of 550MB/s on most common SATA SSD drives, which are already themselves very fast relative to hard disk drives. RAID storage and large capacity drives are added  externally via Thunderbolt.

Apple have integrated Intel’s new Thunderbolt 2 in the new Mac Pro, likely based on the Falcon Ridge chipset to be introduced later in the year. The Mac Pro will also introduce long-awaited standard USB 3.0 ports to the line.

The new Thunderbolt cables have twin bi-directional 20GBps links rather than two sets of 10GBps links as featured in Thunderbolt 1. It is so quick it allows for 4K displays at the same time as daisy chaining storages devices and doing a simultaneous 4K output and file transfers.

Thunderbolt 2 isn’t however based on the same third generation PCIExpress bus that the other internals such as graphics and storage are, so that may rule out expandable graphics via external boxes.

As well as a 12 core Intel Xenon processor the Mac Pro has dual graphics cards with 6GB of VRAM on each. That’s plenty of brute power for editing raw or 4K video but software vendors will need to support the AMD FirePro better than they are at the moment.

A possible issue with the new Mac Pro the lack of NVidia graphics – or rather then problem lies with any software company that doesn’t support the OpenCL standard. The Mac Pro has extremely powerful dual AMD graphics processors (GPUs) but these use the OpenCL instruction set instead of CUDA for software to use the brute force of GPUs like CPUs.

Resolve 9 doesn’t currently support OpenCL, only NVidia’s proprietary CUDA technology. Apple and Blackmagic are both close in their support of open standards so I find it hard to believe Resolve 10 won’t have OpenCL support. Put bluntly, it must.

DaVinci Resolve 10 has had a lot of performance work done to integrate it and it’s really really fast.

Premiere CS6 already supports OpenCL but has the best performance with CUDA.

The new Mac Pro is a huge boost for OpenCL and open standards are always preferable in my view!

Without graphics acceleration, much of the performance boost from the new Mac Pro will be left unexploited by the current software. DaVinci Resolve 9 won’t benefit much from upgrading to a new Mac Pro for instance. I currently require CUDA for editing uncompressed raw in Resolve 9. With it I get realtime Cinema DNG playback at 24fps with it and without it I get 1fps! If you don’t plan to upgrade to the new Mac Pro or the latest NVidia GTX 7xx cards, Resolve 10 will still run on lower performing systems where GPU acceleration isn’t enabled thanks to half and quarter resolution debayer options.

Apple have not yet released the computer and expect to do so later in the year. Until then, internal storage capacities and RAM size isn’t being announced though Apple do have this to say about the specification of the RAM used –

A four-channel DDR3 memory controller running at 1866MHz – it delivers up to 60GB/s of memory bandwidth, which means you can fly through even the most compute-intensive tasks in no time. And since it’s ECC memory, your render job, video export, or simulation won’t be stopped by transient memory errors.