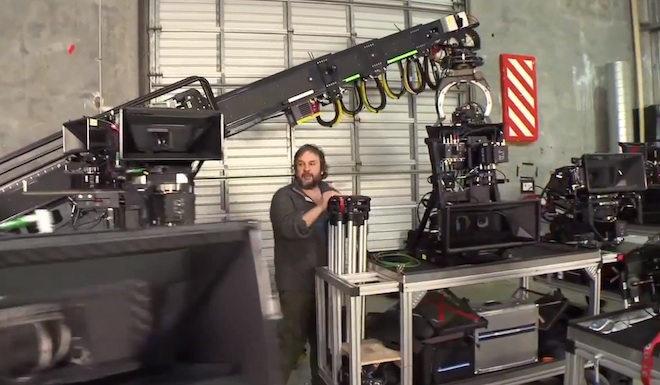 Above: Peter Jackson in the camera department of “The Hobbit”

Peter Jackson chose to take a controversial step away from the cinema look and shoot The Hobbit at 48p HFR. I’ve now seen it in glorious 48 frames per second and that isn’t the biggest problem. Jackson is shooting The Hobbit like an epic but the material this time is not of epic proportions, and the action sequences are typical popcorn schlock. The Lord Of The Rings was an allegory tale with the horrors of Word War II echoing throughout, an epic work of art. Perfect material for an epic film (and LOTR was a huge leap in CGI technology at the time the film was shot). The Hobbit is simply 6 chapters of a thin children’s book stretched to 3 hours.

I came away from An Unexpected Journey with very little passion for it remaining, and hardly any opinion on what I’d just watched.

It has a superb cast and cinematography, it isn’t a bad film but it is instantly forgettable. I find the modern cinema experience has turned clinically cold and soulless. I prefer my home theatre. The Hobbit has moments of joy but is padded out a lot of these soulless action sequences, and pointless exposition that doesn’t move the story forwards. Of course the danger with this trilogy is that if one pushes the story forwards, you don’t have a trilogy any more! Whose decision was this to make three films? The studio or Jackson’s? Such folly! From the half way point onwards I felt this was more boring than epic and I really felt the churn from those digital rendering workstations.

The part of The Hobbit I enjoyed most was the first 10-20 minutes. I don’t know if it was the relief from the adverts ending or my love of the cinematic Rings trilogy coming through but 3D HFR does work to improve 3D and give a certain feel, it is different and not necessarily that bad. In parts the film looks stunning but I don’t think the look of HFR 3D 4K suits the rustic charm of the shire or the narrative scenes. 48 frames or not I still don’t like the 3D projection technology as it currently stands.

In the future when they really figure it out and get rid of the glasses I would like to see a sci-fi movie shot anamorphic in 3D HFR, all clean smooth neon, crisp swooping lines and epic cityscapes. The Wachowski’s Neo Seoul scenes of Cloud Atlas could have suited a 2nd generation HFR 3D. Middle Earth? Not so much. It has too much of an antique texture to it which just doesn’t suit the definition and smooth clarity of 4K 48p. It needed to be softer. The lighting is soft, the content is rustic and charming, but the technology has a hard edge to it. Clean and modern. You don’t describe the English shires or an oak tree as clean and modern so why shoot it this way? This content is not meant to feel crisp and clean, it is meant to be dreamy, grainy and old. I’d rather they’d shot it on 16mm!

The Hobbit does have a superb cast. Martin Freeman in particularly good, but what I saw was not art. Hyper realism and detail from start to finish. Nothing left to the imagination whatsoever. So few ambiguities to interpret your own way. The human touch which the Lord Of The Rings trilogy did so well was curiously lacking in The Hobbit.

We’re going through an era of charmless technological standards conceived of mostly by Japanese corporate giants and a bizarre international studio marketing machine that seems intent on turning cinema into the Pirates of the Caribbean ride at Disney World we’re getting a product with no appeal.

Put the control of mainstream cinema back into the hands of the filmmakers.

The New York Times I think sums The Hobbit up best:

“Mr. Jackson has embraced what might be called theme-park-ride cinema, the default style of commercially anxious, creatively impoverished 3-D moviemaking. The action sequences are exercises in empty, hectic kineticism, with very little sense of peril or surprise. Characters go hurtling down chutes and crumbling mountainsides or else exert themselves in chaotic battles with masses of roaring, rampaging pixels.”

I get zero pay off from these sequences and we’ve seen them done countless times. Compared to the best cinematic action sequences they’re artless and devoid of any real feeling, executed by a committee of CGI renderers lacking in the basic language of cinema. I cannot escape the fact they’re a team of designers with a mouse. They’re not auteurs. They’re not feeling anything as they animate. Great graphics. So what? The greatest animators put a ton of subtlety and personal feeling into their work. Theres nothing subtle about shoving hordes of goblins into a fiery pit for 10 minutes continuously. Andy Serkis as Gollum is not Oscar worthy in my view. Gollum is annoying. The only feeling I got from the CGI heavy sequences of not just The Hobbit but almost every blockbuster CGI sequences it that here’s a team of renderers really trying to push the polygon count up. 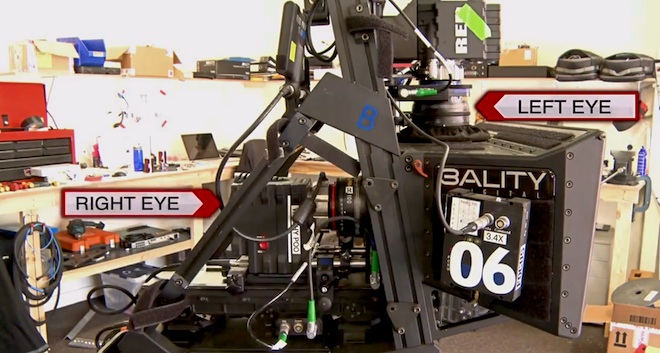 A glance up into the projection room revealed a similar beamsplitter in front of the projector as was used in front of the Epic cameras Jackson used on The Hobbit. I went to see The Hobbit in a Sony commissioned cinema, the beamsplitter they used was a Real D XL. Jackson shot The Hobbit with 3ality beamsplitters. These are mirror boxes which allows the already small cameras to be aligned closer than would otherwise physically be possible if sat side by side. The 3D rig has two cameras mimicking our left and right eyes. This technology is utterly let down by a cheap pair of glasses. The Hobbit was a labour of love for Jackson which cost $270 million and we have to appreciate it through a pair of $1 plastic shades. Madness. I hate not having clean peripheral vision when I look at a screen. I am never far away from thinking about how the rims of the shades intrude into my sight. I don’t wear glasses in everyday life so maybe it is a case of learning to mentally block them out and focus on the screen, but I found it difficult and the problem got worse as the film went on. Half way I fumbled with them as I was going cross eyed and put a finger smudge on the lens and no matter how hard I tried to clean them up I was getting a blooming affect in one eye! A nightmare. Honestly guys, these things are the pits. We need to move 3D away from glasses. The weakest point of 3D in the cinema for me was not 24p. They fixed the frame rate, why not the most important bit? 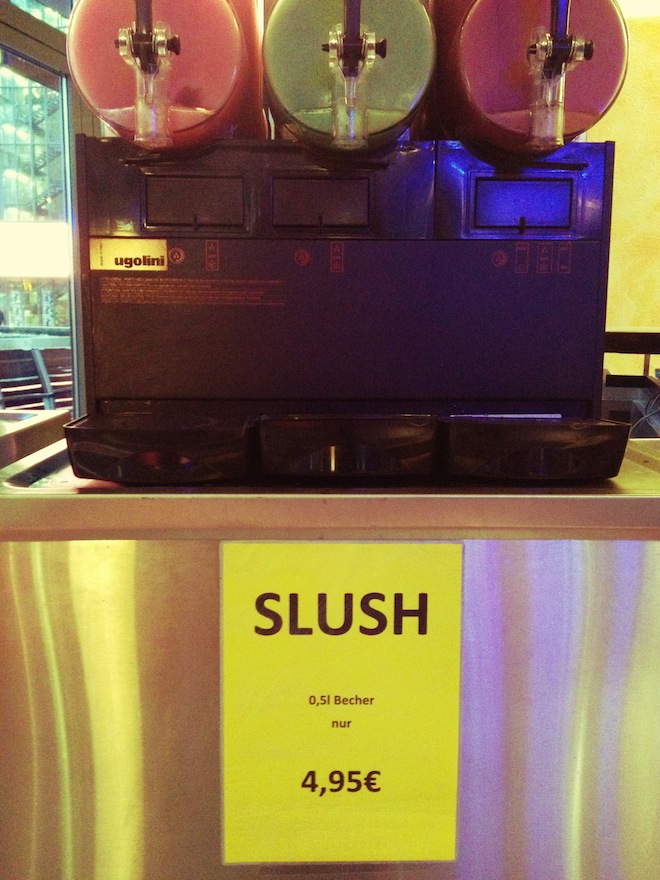 After paying for the tickets, more than a Blu Ray, I am smacked around the head for 30 minutes with one pointless advert after another, it completely cheapens and dilutes the magic of the cinema experience. A Blu Ray cost the same and isn’t riddled with advertising. Why should a cinema be? And you get to keep the Blu Ray!

It costs $1000 for a very good home theatre projector and $3-5 to rent a full HD film on iTunes. Cinema needs to start competing.

We will be subjected to a ton of Hobbit merchandising, and a film every Christmas for the next 2 years. On top of the last 10 years of Lord Of The Rings. It is too much! The elvish cow has been milked dry. In the cinema, the audience is the cow. €5 euro for slush. €10 for popcorn and coke. They really they need to sort this out if they want to keep people flocking to multiplexes. If the economics of ticket sales isn’t making multiplexes a profit, then don’t punish your customers. Think of a more creative way of extracting more margin. A 1000% mark up on snacks isn’t the answer. Maybe 3D snacks!??

I had a good crowd in Berlin at the cinema but sometimes, other people are a nightmare with their eating marathons, iPhones and weird reaction to whatever crap is on screen. For me the worst thing about watching a movie with a crowd is when you’re not into it and they are. I’d hazard to call this cinema at all, more brainless consumerism. I haven’t completely lost faith in humanity – I am sure people go to cinema… For cinema. They go for the stories and to be wowed. Precious little of that on display in modern popcorn entertainment sadly.

After all the suspense and drama of whether 48fps is the future standard, this film has left me feeling completely disinterested. In the end the biggest problem with The Hobbit I think is the decision to stretch a thin children’s book to 3 epic films – a disaster for the franchise. The content is to blame, not the frame rate.