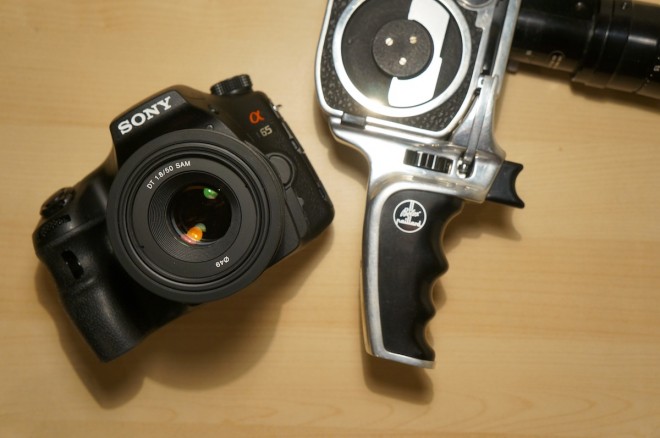 EOSHD recommended lenses for the Sony A65 / A77

Amazingly Sony have got their flooded production going again and Sony A65s have found their way to England in time for Christmas. I’ve come to the UK to spend some time with family and in Manchester I picked up the Sony A65 with kit lens for £699… Considering how similar it is to the A77 that is a pretty competitive price by Sony and I am sure this is going to give the 600D / Rebel T3i something to think about over the next few months. But is it any good for video?

Here is a camera that has issues. Many would see 2 especially as hammering down the lid on the coffin with such force they’d need a pixel peeper to see where the head of the nail is. First the A65 doesn’t use the whole APS-C sized sensor to record video with and so sensor size in video mode is similar to Micro Four Thirds. Second, the A65 has the same image processor for video as the NEX 5N which allows the GH2 to stomp all over it for fine detail especially at wide angles. Fine detail is not lacking entirely it is just kind of unstable. It fizzes, it is aliased and it is soft. Sometimes the aliasing is so bad you get coloured moire on hard contrast edges. It is not so much that the detail isn’t there – it is at the party but drunk.

Pixel peepers don’t like such behaviour and at first hard it is hard to see why you’d want to use the A65 over the GH2, or the NEX 5N which has no crop and better lens adaptability. Hard even to see why you’d choose the A65 over the last generation of APS-C Canon DSLRs which despite being the flag bearer for the entire movement frankly gave DSLR video image quality a bad name with their awful line-skipping moire-aliasing and soft resolution more akin to Super 570p than 1080p. The next generation of Canon DSLR should be superb though. I hope I am still alive when they come out.

The ugly fine detail is the result of not-brilliant image processing and scaling from a monstrous 24MP sensor to 1.92MP for 1080p. But the good news is that it really does look far better when you optimise the picture profiles in-camera, just as was the case with the NEX 5N.

In fact the problem is mitigated to a greater degree than I’ve seen on other cameras by just changing in-camera settings. With softness set to -3 (all the way down) and Sunset picture profile with manual white balance enabled you get a far more pleasing image. Equally the creative style Soft High Key (separate to a picture profile) works wonders in giving you a softer and flatter cinematic image a bit like CineStyle on a Canon DSLR.

Whether unstable fine detail is a problem on the A65 also depends as much on shooting style and lens selection as on descaling algorithms nobody can see. The NEX 5N and A65 are not the kind of cameras you’d go and shoot brick architecture with at a deep depth of field – but when shooting actors at close range with a shallow depth of field the ugliness just isn’t noticeable in the image especially when projected rather than viewed on a laptop. Likewise fine detail in macro shots come out brilliantly.

But still that burning question – why does the A65 deserve a place in your bag when the GH2 is just so damned good? The GH2 is more adaptable to different lenses, it has been hacked into the stratosphere codec wise, it has by far the cleanest image from a stills CMOS sensor, the best image processor in class and the most ‘real’ resolution of any DSLR video offering.

The in-body stabilisation may be chief suspect in the quest for who murdered the full sensor (although turning it off doesn’t make the crop go away) but if you intent to make use of it with your non-OIS primes, old or cheap glass it is worth every bit of the crop and more.

I cannot think of a single other video DSLR (5D Mk II, GH2, 7D, NEX) or pro video camera (C300, FS100, F3) where you can stick a £99 fast 50 on it and have it suddenly transformed into a powerfully stabilised reportage / run & gun lens for free. It is effective, silent and allows you to get much skinnier with rigging than with other cameras for stable handheld work.

No other DSLR has as good MF aids as the A65. Peaking, adjustable peaking levels, phase detect AF confirm in live view mode whilst recording video thanks to the SLT mirror. Even that green box appearing when the subject is in focus makes a big difference to how this thing handles with a manual lens.

Chunkier handling than a NEX 5N or NEX 7

I still prefer the handling of the GH2, 5D Mark II and A65 to the NEX 5N and other skinny models. 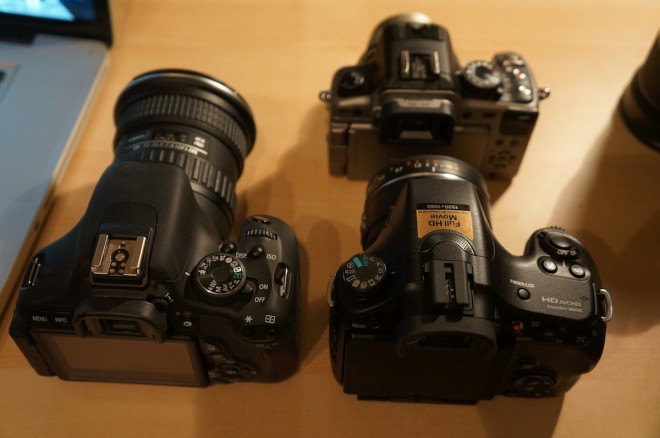 This is really tied to the above point but deserves a separate mention. With a manual focus lens the EVF built into this camera is the best you can get. In fact it is better than most professional video cameras including the AF100. The articulated LCD is well up there with Canon’s benchmark. Incredibly detailed monitoring, and all built in, this is the only DSLR I’d be comfortable doing precise manual focus bare bones with.

OK the NEX 5N has these as well but the image profiles really do work wonders. They help with the new Sony DSLR / NEX trait of fuzzy aliasing and give you a far softer, more cinematic image with smoother gradated tones and smoother highlight fall off. You get better shadow detail than the GH2 and a wider dynamic range. Just make sure you set white-balance to manual or a preset if you’re using the Sunset profile since it wacks up the auto-white balance for high temperatures to emphasise reds and oranges.

Although the A65 is plastic when the A77, Canon 7D and NEX 5N are magnesium alloy ask yourself whether you need that or not. It really depends if you abuse it enough to justify it. Heavy use in wet or dusty conditions justify the A77’s build. For others, the A65 represents a bargain.

The A65 is like an APS-C 5D Mark II when it comes to stills. In good light RAWs are far better than the GH2 and NEX 5N, they have a real three dimensional ‘pop’ to them and very good colour. In low light the A65 falls back and hovers behind the NEX 5N but still ahead of the GH2. So again – for behind the scenes stills or news reportage – this is a handy feature.

So the A65 does have a purpose.

No, it isn’t as good an all-rounder as the GH2 video wise. No, it isn’t a full frame video camera with bells on like the 5D Mark II. No, it doesn’t adapt to anything that is round and made of glass. Stick with M42 and Alpha lenses and forget a GH2 style voyage into experimental lens options. It does have a few handling issues but nothing major (the placement of the movie button and ISO button is not ideal). In fact the handling overall as well as the menus are like butter for the most part, you pick it up and it all seems to be very fluid.

This is a camera with incredible features that compel you to explore and to get the shot. It just seems to work. The AF and live view system is mostly responsible for that, they feel incredibly advanced compared to other DSLRs. It has in-body stabilisation and 1080/60p, the best built in EVF available and a very compelling price tag so what is not to like?

There’s much more to come from this camera so stay tuned. I will be doing a shootout in the snow up in the hills of England versus the hacked GH2, Canon 600D and Sony NEX 5N tomorrow so expect tons of sample videos. I’ll also be getting an idea of how the stills compare to other cameras especially the NEX 5N and 600D.

And finally… any draw-backs?

There are two Sony design decisions which affect all their cameras, that I feel the need to mention. First I find the ‘building database’ habit of the new Sony cameras – from the HX9v compact to the A65 (they all do it!) – absolutely infuriating when swapping cards. Once a card is used in another camera the Sony NEX 5N or A65 takes ages to ‘recover files’ or ‘build a database’ which is usually completely unnecessary. This behaviour can’t be disabled, and sometimes you can wait 2-3 minutes for it to get its act together. The other oddity of the firmware is that AVCHD, MJPEG and JPEGs are divided into different sections of the playback menu and you cannot just jump sequentially through a card of stills and video. You have to activate the stills or video ‘view’ in the menus! Very silly. Lastly the Soft High Key creative style cannot be fine tuned, and you can’t select a Picture Profile like Sunset with that enabled, or adjust contrast, saturation and sharpness. I guess that is because they are all preset as part of the creative style but it would have been nice to fine tune it a bit considering how useful it is as a flat image profile.