For those who find video very lacking on small cameras especially the Fuji X100S and X100T, Panasonic now have a high end retro-styled compact with 4K video.

The sensor and EVF come from the GX7, which in turn is quite close to the GH4 in performance terms. We are talking a gigantic sensor here for a compact, larger even than the 1″ sensor of the Sony RX100 M3. As well as a large sensor, the camera packs a large aperture Leica 24-75mm which opens to an impressive F1.7 at the wide end.

This adds a premium zoom lens to your small-camera-large-sensor arsenal whereas the X100T only has a fixed focal length prime.

One of the most frequented cameras at Photokina by visitors was the LX100. Indeed the busiest stalls were all set up around 4K video at their core. Sony, Samsung and Panasonic all pushing it hard, Fuji, Canon, Olympus and Nikon not. It’s interesting to note that all the camera manufacturers pushing 4K have 4K TVs on the market which are now accessibly priced for most consumers and the cameras should encourage uptake of those. I recently saw a Sony 4K on the high-street in Berlin for 1300 euros, hardly any more than a higher end 1080p set.

The LX100 is a perfect travel camera, something you can shoot 4K on with the minimum of fuss, get back and watch it on your 4K TV. As a result of 4K video the camera captures all pixels to record video and that improves all aspects of the image not just resolution. Thanks to large sensors in stills cameras doing 4K video, those 4K TVs will be done justice to with a wider dynamic range and more natural colour from cameras like the GH4 and LX100. 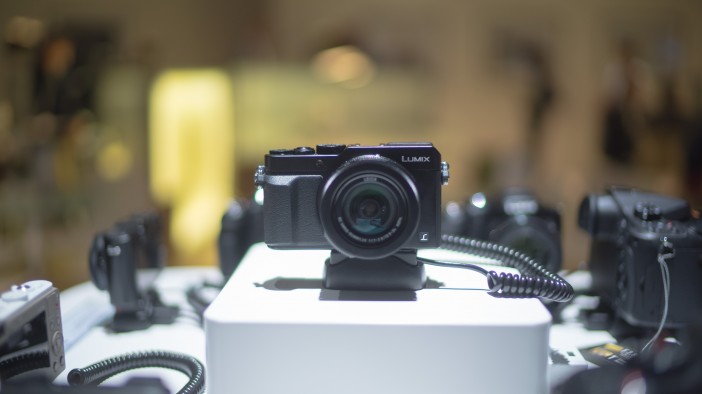 Olympus did not allude to any 4K this year and their stand certainly wasn’t the busiest. Fuji rolled out the X100T with the same old lens as the other models, but the X-T1 does look lovely in grey. Canon has no 4K solution under $10k and the one they do have (1D C) has not sold very well. Nikon have no 4K solution to speak of. It’s just odd!

Along with retro styling the LX100 also has a Leica D-LUX variant which costs a surprisingly small amount extra by the usual Leica standards. Compared to the Sony RX100 M3 the LX100 has a significantly larger sensor and lower megapixel count. This makes for better low light performance and a shallower depth of field. It’s the only camera of its kind to shoot 4K video whereas the RX100 M3 only shoots 1080p XAVC-S at 50Mbit. The 4K codec on the LX100 has double that bitrate.

The Panasonic LX100 costs just $899 (pre-order at B&H). This is very democratising. Soon everyone will be casually shooting 4K, and those left shooting 1080p on older Canon and Nikon cameras will be missing out on the better quality.

Even if you feel you “don’t need 4K” you do actually need 4K if you want high quality 1080p. With 4K on the LX100 and GH4 you don’t lose a huge amount of the image through line-skipping or pixel binning. On an iMac 27″ screen for example, line-skipped 1080p looks extremely soft full screen, whilst 4K from the LX100 looks like oversampled pin-sharp 2.5K at the native screen resolution and on a Macbook 15″ Retina display it looks incredibly detailed and retina-standard.

I use small cameras a lot alongside my iPhone for casual shooting and visual documenting. The LX100 appears to satisfy my yearning for a high quality small camera, and a ‘pocket GH4’ I can take anywhere for 4K video and stills. The Sony RX1 I have used a lot and although that is full frame with a lovely Zeiss 35mm F2.0 the video quality is a long way of the A7S to say the least.

I hesitate to call the LX100 a ‘compact’ because about the only thing it shares with a traditional compact is size. The performance of the LX100 and image quality makes it worth thinking twice about taking snaps on an iPhone. The sensor is DSLR-class, the EVF mirrorless class and the lens frankly a class of its own. If sold separately for Micro Four Thirds it would be a premium offering with a premium price. I found the performance of the Leica zoom to be superb, in keeping with the recent Panasonic-Leica 15mm F1.7 for Micro Four Thirds it is pin sharp wide open and offers punchy colour. Bokeh is pronounced and creamy. 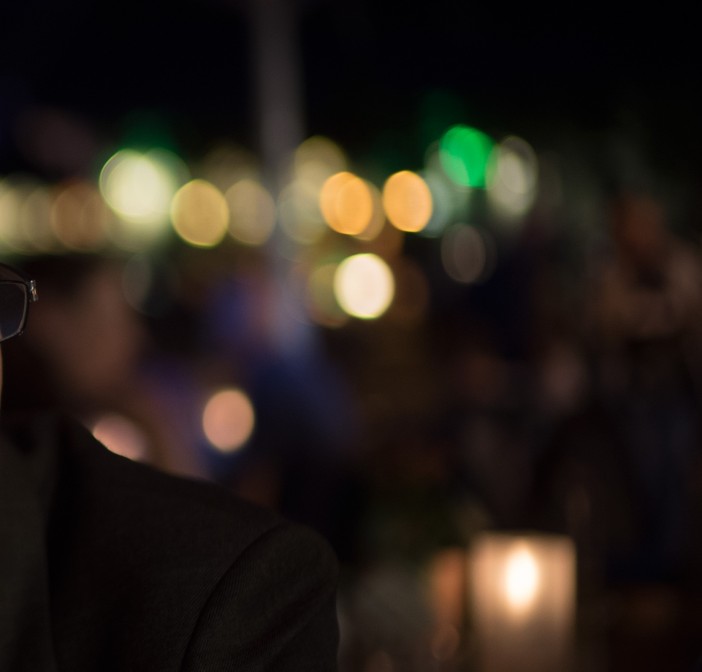 The camera goes easily into a jacket pocket. The EVF on the LX100 is excellent given the challenges posed to the viewfinder by such an extreme miniaturisation effort. I believe it is the GX7’s EVF transplanted into the new smaller body. I found it to be functionally good but not quite as comfortable to use for long periods at a time compared to the larger one in the GH4. The new Panasonic GM5 has a much smaller EVF, so given the LX100 is only fractionally larger they have done well to fit the GX7’s EVF inside.

The LX100 has a doppelgänger in the D-LUX Typ 109. Essentially the same cameras but for a different front and rear grip, subtle body styling differences and square Leica-M style buttons on the back instead of round Lumix ones. Here are the differences side by side at the back – 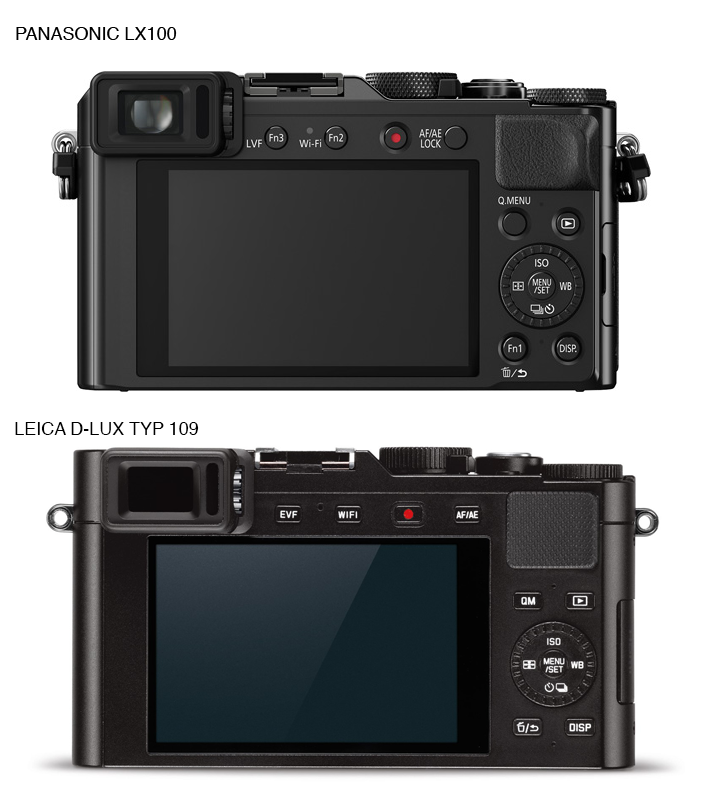 The LX100 has a 4K Photo Mode for stills photographers to use 4K as a capture format in their work.

The mode can record continuously or in a mode which keeps the last 15 minutes and deletes the rest on a rolling basis. This is great for storm chasers and sports shooters, or for capturing unpredictable things like lightning strikes. The camera will get the shot and you don’t have to worry about timing, simply stop capturing once you have what you want. Then you can cut down the amount of post work dramatically with a simplified way to grab 8.3MP stills from the 4K capture feed in multiple aspect ratios.

Normal 4K video has a 2160 line resolution but the multi-aspect ratio sensor in the LX100 allows a greater vertical recording area to be used with taller aspect ratios. It doesn’t merely crop the sides. 1:1 extends vertical resolution to an enormous 2880 lines. That’s almost 3x the resolution of 1080 full HD.

Multiple aspect ratios like 4:3 and 3:2 will also be of interest to filmmakers using anamorphic lenses.

The 4K Photo Mode has 30p and 25p but not yet 24p (it might be added in a firmware update later). The thinking behind this is stills will often be shot at high shutter speeds to avoid blurry frames, and 30p syncs to 60hz lights in NTSC regions, whilst 25p syncs to 50hz in PAL regions to avoid flicker. So 24p is not there for the fact that stills shooters don’t need it in a 4K Photo Mode. Anamorphic shooters and filmmakers do, and on that subject Panasonic are listening intently in particular Matt Frazer at Panasonic US.

The general responsiveness and layout of the camera is good, though the video button is quite close to your nose when shooting through the EVF. It’s a small camera and sometimes feels a bit cramped but generally it is lovely to use, especially the retro Fuii X series style top plate with shutter speed dial. The styling and looks of the camera makes it easy to mistake for a Leica, the silver version in particular.

The lens has a nice manual focus ring and focus aids are very effective like on the GH4. Peaking and a high quality magnified focus assist windowed or full screen are very useful. Like the previous LX cameras there’s an aspect ratio switch on the top of the lens housing, allowing you to make use of the multi-aspect ratio sensor.

When I have had a meaningful amount of time with the camera I’ll bring you a full review. The camera is due to hit the streets in late October / early November.