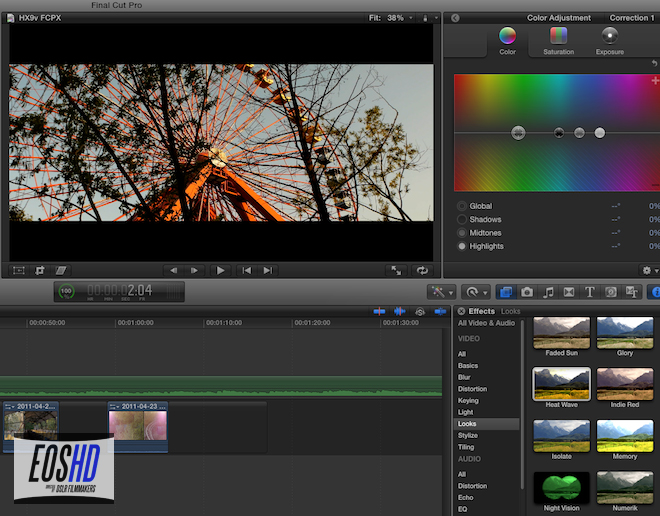 Typical first impressions of Final Cut Pro X arrive when you import your footage, the Camera Import window defaults to your Mac’s webcam so you get a mugshot of yourself wondering where all the codecs are. 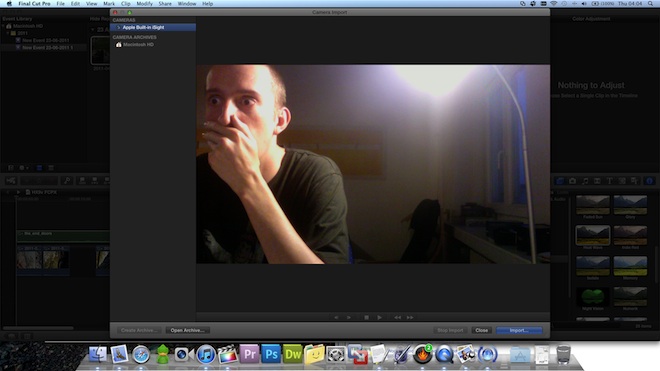 Coincidentally this was also my reaction when I first installed Quicktime X.

The following are missing out of the box:

They’re additional downloads via an OSX software update, which implies to me we could be seeing quite a lot of updates in the next few weeks! Unfortunately even post update I can’t get my Sony HX9v 1080/60p AVCHD to be recognised by iMovie Pro, I mean Final Cut Pro X. So back to Premiere for that kind of material. DSLR footage and the GH2’s AVCHD does however ingest fine.

It gets better from here-on in though. What seem like startlingly basic admissions at first are actually just basic design changes (like only being allowed one timeline per project and the lack of cut and paste options on a right click of a timeline clip. Really basic stuff.). Once you realise how things have been rejigged or redesigned, any frustrations are short-lived. Lack of multiple timelines is compensated by Compound Clips and switching between projects of different media formats is instantaneous.

My first impressions of the Magnetic Timeline are mixed. Either one does not yet fully understand how to get the best out of it or it is not the fantastic advance we thought it would be.

In fact I’ve turned much of it’s behaviour off, by using the ‘Positioning’ tool, rather than the default Select tool. This allows you to revert to more FCP7-esq behaviour and drag clips around without inadvertently moving others.

With the Magnetic Timeline, trimming or lengthening clips earlier in the timeline always shifts the media in front of it on the Primary Storyline forwards or backwards – the whole timeline is kind of elastic, not fixed. So unless you build sequentially from 00.00 to the end of the sound track in perfect linear order, and never make changes afterwards, you can very easily knock off the timing of clips to certain parts of the sound track. I may just be ‘doing it wrong’ – it’s early days – but that’s my first impressions of how things work, and it’s just annoying really. Terrible for music videos.

The magnetic behaviour is however useful for faster, rougher edits where an audio track is on each clip itself and not separate or in need of sync.

Effects wise it would be nice to see an aspect ratio adjustment to clips on a standard 1920×1080 timeline, for anamorphic projects. Right now, it’s a matter of squashing a clip using a percentage. Here’s one for the math boffins – What’s 2.35:1 expressed as a percentage X to Y? What Apple have done here is make something that should be easy, hard – ironically in an effort to make iMovie style clip distortions easy. It is frankly amazing that none of the beta testers brought this up. Are they just ‘yes’ men, or what? We need better anamorphic support Apple. 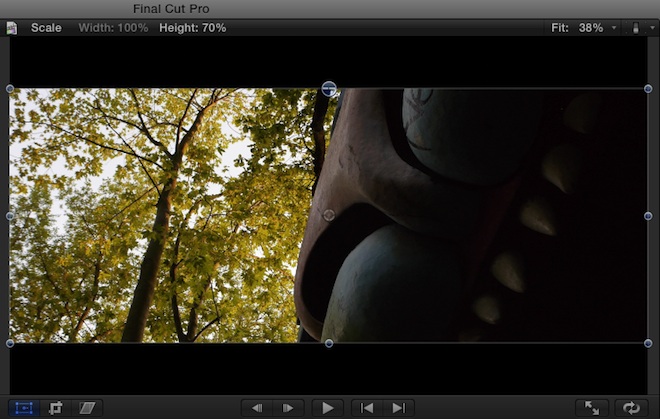 Ingesting footage into FCPX is almost entirely automatic. No settings or options are in the new Log & Transfer (now named Camera Import) other than to select what clips you want to import to the Event Library, and the in / out points of said media. The timeline then automatically adjusts to whatever the format of the media is. Performance is fantastic.

Effects are bare-bones mostly, which is good news for plugin developers since they have a lot of functionality to fill in for. There are even a few dodgy toy effects that have no place in a pro app. But it’s not really worth being upset about, because in fact most of the new ‘looks’ are useful like the subtle grading templates and vignettes. Some of the less subtle ones will soon become overused and instantly recognisable as ‘that FCPX template’. I can only assume Apple left the Night Vision Goggles one in as a joke!

Gone is the dual-monitor design of the editing layout whereby you’d always have the contents of the timeline playhead in one and the project media in another. With FCPX you very roughly select in and out points over a thumbnail in the Event Library whilst getting a nice scrubbing preview of the clip in the monitor window. Then you have more refined control on the timeline.

By default a mouse-over on a clip scrubs video and audio in the monitor, which might be annoying when simply moving the mouse around the UI but I’ve now got used to it and performance is excellent. FCPX is generally very snappy indeed. You can turn this on and off with the ‘S’ key.

Speaking of snappy, something I find myself toggling on and off a lot is the ‘N’ key. This enables and disables timeline snapping. Turned on and you can bonk clips together like there’s no tomorrow. Turned off and it is a more refined affair. You can still overlap clips on multiple tracks and cut into clips on the same track as if you have FCP7 style timeline tracks but there’s no distinction between the behaviour of audio and video tracks and you can even put an audio clip in front of a video clip on the same track, which I find a bit odd and pointless.

You can install FCPX on the same Mac / drive as your beloved old FCP7, but if you try and run them concurrently FCPX says it will quit. Not a happy marriage.

Significant for Vimeo, nice job there.

Grading is done with a ‘no thrills’ but very intuitive colour corrector which I like a lot. You can adjust colour balance, saturation and exposure for shadows, mids and highlights independently as well as the whole range (global). It works well. What more do you need? S-curves, etc… They will come in a third party plugin.

And here we get to the crux of what FCPX currently is.

It follows a certain philosophy  that prosumers and even many professionals only use what they really need, a small subset of basic features; and that now, rapid intuitive use of the fundamentals is more important than sheer depth and complexity.

I have to partly disagree with the approach Apple have taken with FCPX 1.0, they are both important and we need that depth and complexity back and it was stupid of Apple to leave it out for the first release, because it encourages those who need certain features to jump ship to Adobe or Avid – but at the same time, it was essential for Apple to move the fundamentals of editing into 2011. The performance, the UI – they are all extremely polished in FCPX and enjoyable to use. The underlying architecture is much better performing, and feels fresh.

If something good is to come from this ‘dumbing down’ or ‘iMovie Pro’ malarky, it is the fact that video pros and editors might realise that spending more time thinking creatively is more important than endless faffing with complex buttons. But there are some gaping holes in workflows now, like the ability to import old FCP7 projects and export project data in XML format to another machine and FCPX user.

FCPX is not yet good for fine tuning projects to the Nth degree, or for most established FCP7 workflows. But these will get added via plugins and software updates before too long.

It was important for Apple to do several things with FCPX, and they have succeeded:

Going back to FCP7 after spending time with FCPX does seem like a retro-grade step. FCP7 seems clunkier, slower, more fiddly. Some things are simply a breeze in Final Cut pro X, and thankfully they are the fundamental things you will use most. Get over the initial bafflement and you will enjoy it.

It seems the reason Apple did not make any noise about plugin support (or even tell developers) is because it’s almost business as usual. Looking at the package contents on my drive, Final Cut Pro X’s system files contain the established FXPlug libraries, updated for FCPX’s new 64bit environment. This means that for most existing FCP7 plugins, a simple recompile and a bit of tweaking might be all that is necessary to get them working with FCPX. Noise Industries have their FX Factory working with FCPX already. (Thanks to Philip Bloom on the heads-up on that).

It’s very early days for everybody’s experience in FCPX, and so I reserve the right to change my mind! Be it for better or worse in the upcoming parts 2 and 3.