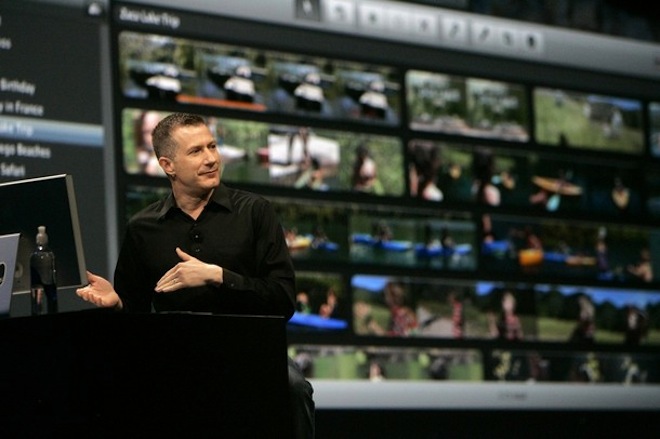 Apple’s slogan for FCPX is ‘everything just changed in post’. It certainly did. Upon the shifting sands of technology there’s only one constant – your creativity. As we see when tech moves on, it matters more than 10 years of editing experience on previous software. Apple have swept that away in the blink of an eye.

Now the dust has settled Apple’s strategy is coming into clear focus. Apple have taken the unusual steps of removing FCP7 and Final Cut Studio 3 from shop shelves. Discontinued. They have no roadmap for when critical missing features will be added, but we do have a night-vision goggles filter.

This is Apple bidding farewell to pros. ‘We are a consumer technology company and that is how we make our profit’.

Much as I appreciate they needed a fresh start to re-invent the NLE, I think Randy Ubillos and his team have thrown the baby out with the bathwater.

For many pros this is a nightmare scenario. A production house based entirely on Apple’s software is now operating around discontinued and unsupported software, which has been replaced by something completely inadequate.

And much as I like to emphasise creativity on EOSHD, much as I am for stripping away dogma and professional snobbery from this industry, I completely sympathise with the more reasonable concerns the majority of pros have with Apple’s handling of this.

People whose workflows are decimated by missing features like multicam, XML for sharing projects, numerous third party plugins are for the moment stuck in the past, with no 64bit or user interface improvements. Apple may well lose huge chunks of this market to Adobe or Avid.

On the positive side Apple have created a revolutionary foundation for video editing software and they are playing the long game. Eventually Avid and Adobe may have to go through the same pain as Apple has and redevelop their A/V foundations from scratch to revolutionise their products. That Apple has done it first is significant.

That they have made such a mess of it’s rollout is just as significant.

In part one my early first impressions were overly positive despite frustrations and some unfamiliarity. Those frustrations have now come into a weird kind of dual-perspective. In once sense they are a drop in the ocean compared to what has been achieved with the bigger things – performance and design – and in another sense FCPX has huge omissions that are deal breakers for what I want to do with the software.

Since there are such stark and divisive issues with FCPX I have divided part two up into pros and cons. Let’s start with the positives first.

Whilst running idly with a full project opened, FCPX has a RAM footprint of just 256MB. Adobe’s bloatware Flash Player plugin for Safari was using 512MB. Yes – for a mere webpage plugin for animated ad banners. That is incredibly effective use of RAM by a piece of software as complex as FCPX. It gives signs of what technical achievements have been made under the bonnet and I have a feeling Apple’s young engineers were more enamoured with achieving this than working with pros to implement support for legacy FCP7 projects and XML.

Editing AVCHD in FCPX is not native like in CS5.5 but it transcodes unbelievably quickly to H.264 unless the project is specifically set to ProRes or XDCAM. Those files are stored in a directory on your drive. You can then share the raw files with other editors. In many ways FCPX ‘just works’.

Media export options built into FCPX are vastly simplified over FCPX but again, just work. More advanced encoding features are now all in Compressor 4, which maintains a good level of functionality relative to the last version.

There’s still a lot of mis-information out there. I heard someone saying that you couldn’t export a JPEG still frame in full resolution from your timeline. I heard a lot of complains that ‘bins’ were gone from the media manager and that you can’t organise clips into folders “like having no Finder on Mac OSX just spotlight!”. Yes you can – just create a new event and drag the media into it, and rename the event bin however you like. 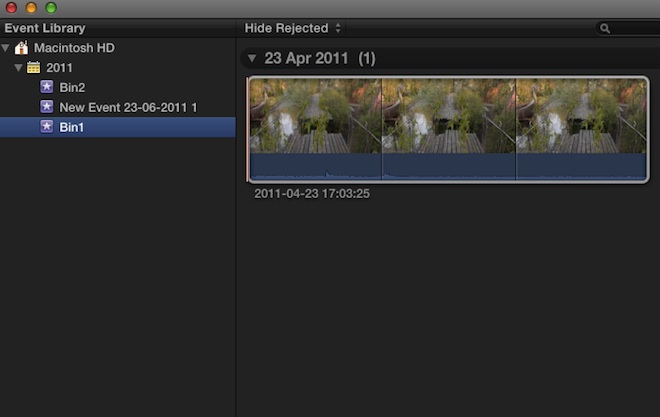 I prefer the event library to the old media manager in FCPX. If you dislike the thumbnail view of clips and need more room to trim clips before adding them to the timeline, you can switch to a list view which gives you a wider area to scrub over the clip and trim, as well as more detailed information about your media in list form.

I find it much quicker to locate the shots I need from a ton of footage in FCPX, because scrubbing is more intuitive, more direct and a lot quicker. But some of the video scrubbing controls from FCP7 are now missing. Do I miss them? Not personally but some might.

The new timeline has a clip index window with tabs to show all or specific kinds of media in a index form, allowing you to quicker find certain media in your timeline. This is particularly useful for finding titles. Clicking the titles tab filters all but titles in the index and clicking the title jumps to it on the timeline and allows quicker access for editing it. You can also organise media in this list by tagging media with keywords and showing the results by tag.

FCPX does not have a Save function – no more Apple & S. To branch off a project and maintain a copy, you can do Duplicate Project, but other than that it saves as you go to prevent you from ever losing work if your Mac crashes or you lose power.

So what has FCPX really given us at the end? A lot of fancy under the bonnet stuff, and less on the surface?

I feel that the magnetic timeline and other user interface improvements are in the end not that significant and in fact quite limiting. Gaps on the timeline now behave like clips, and if you delete a gap the timeline collapses to fill it, shifting clips out of sync with a separate audio track.

Anamorphic support and compatibility with the AVCHD 1080/60p of my Sony HX9v does not exist in FCPX and I had to buy the app to find this out. There’s no trial and despite Apple saying on their press release that FCPX supports resolution independent editing, you cannot in fact choose a custom resolution for anamorphic editing.

For this you need to use Compressor 4. 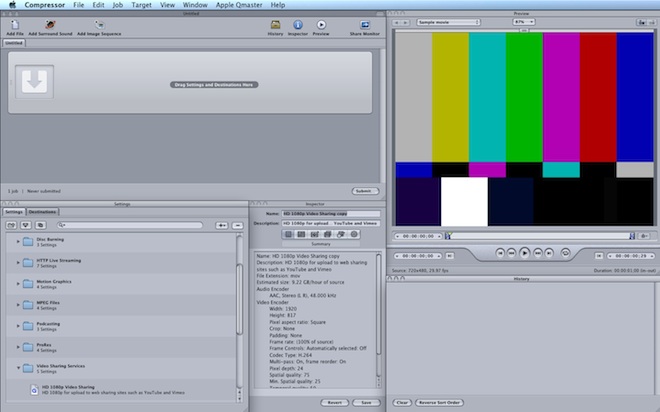 Here you get a lot of encoding presets but curiously not Apple Intermediate Codec or Prores LT, just ProRes 422 and it’s 422 Proxy variety. You can create your own custom preset and select whatever video codec you like though.

You get HTTP live streaming presets as well as recommended settings for Vimeo and YouTube.

Compressor also has the Image Sequence support for timelapses that Apple removed from Quicktime when it went from Pro to X.

Since encoding and export options are so basic in FCPX, Compressor 4 is a must-buy for almost everyone especially if you need the anamorphic aspect ratio support.

Footage shot with my Sony HX9v in AVCHD doesn’t even show media in the import window. I’ve found a hack to import the HX9v footage by copying the raw MTS files into a GH2 AVCHD directory. And then it imported half successfully and delivered an error message on the rest! Pitiful.

The HX9v is a consumer camera, so it’s not only the pros who are going to be annoyed at this. More worryingly for FCPX is that the all singing all dancing performance deserted the app with the 1080/60p footage that I did manage to import from the HX9v. Premiere CS5.5 was quicker with it, and that’s editing AVCHD natively.

Thanks for RichST, an EOSHD reader, he has found a workaround for stripping the AVCHD wrapper off media instantly, turning into good old MPEG 4. I’ll have more this week about this, and it may help 1080/60p editing in FCPX to strip the AVCHD wrapper and convert the footage to ProRes in Compressor 4. But it’s still not as quick or as simple as editing AVCHD in Premiere CS5.5.

Alongside simplification, speed and a camera import window that defaults to your webcam, Apple have 4K support. Maybe it’s a sign that 4K is going consumer, as it undoubtably will do in the coming years. But whilst Apple have 4K support, they don’t have support for REDCode, so who on earth is the 4K support for? You see the contradiction here – and there are many similar ones.

Apple have succeeded in capturing a much larger section of amateurs and prosumers and at a much lower price point that reduces the scale of piracy we’ve seen before in this market.

The problem is, they are going to lose a hell of a lot of pros to Adobe.

Yes FCPX is forward facing, it heralds the future first and Apple did the same with the iPhone, the iPad and iTunes whilst the rest put out Nokias, netbooks and CDs. But that was in the consumer market, where Apple excel. Is the pro video industry really ready to shift to this shiny new editing package when so many crucial things are lacking? No.

Is Apple now firmly a consumer-only company, who have pulled out of the pro software market? It certainly looks that way.

Perhaps Steve should make recapturing the pros a bigger priority than the Turner Family and the Summer Vacation? 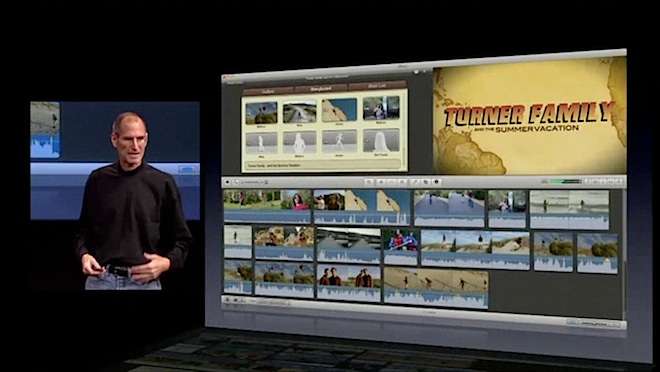