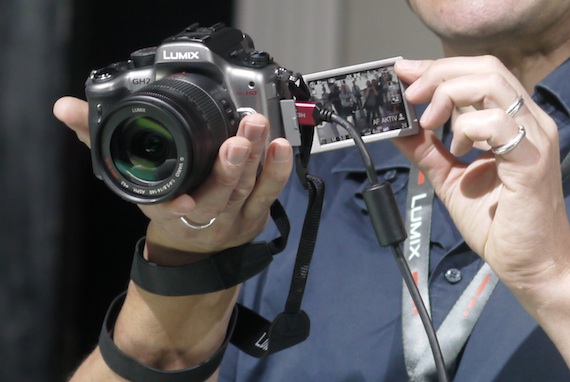 I just spoke to a source at Panasonic and touched on the possibility of the GH2 hack, and why Panasonic wanted to make it hard for Vitaliy Kiselev to improve functionality on the camera, for free and unpaid.

The answer was candid and it goes against all the current theories surrounding the issue. Before we get to the reasons let’s debunk a few of the well known theories which already exist:

The above are not the major issues.

The real issue is the risk of cameras being damaged and returned to service centres.

This would cost Panasonic a huge amount of money if suddenly – en-masse – thousands of bricked cameras were returned as a result of a faulty hack (which Panasonic have no control over).

Panasonic also want to protect their brand against the resulting bad publicity and maintain a high standard of product reliability, all of which a hack has the potential to impact.

The low quality of such cells is also a fire hazard. Panasonic would have a situation on their hands similar to the infamous Nokia disasters of years ago whereby 3rd party batteries were causing phones to set on fire or leak acid onto people’s skin. This did huge damage to Nokia’s brand and reputation for reliability, even though the problem was caused by outside parties whom Nokia had no control over.

As far as the firmware being crippled or limited in any way I believe this is to do with the cameras being designed for a consumer market where compatibility and standards compliance helps Panasonic cut down on support costs.

Remember – support is a big overhead and one of the reasons why professional gear costs more, since the support is better and wider reaching for professionals than it is for consumers.

If Panasonic were to release a consumer camera too complicated for the average consumer, or one which uses an exotic codec, 4:2:2, or a non-standard high bitrate HDMI output or recording format, customer support costs would sky rocket as non-tech savvy users phoned dealers, retailers and Panasonic’s support teams – let alone returning cameras en-masse due to compatibility issues with older TV sets and cheap SD cards.

There is no purposeful crippling of functionality to somehow deny filmmakers higher image quality. It is all for a very good business reason – so is the encryption of firmware to prevent the dangers of customers installing potentially unreliable hacks.

Whilst it is true that the hack generates a lot of excitement, higher sales and increases the value of a camera for certain enthusiasts, professionals and filmmakers – it comes at a huge cost to Panasonic should it all go wrong.

However, good luck to Vitaliy Kiselev on the GH2 de-cryption and hack. I want it, and I believe we’re in good hands and that the hack would be safe to install and perfectly legal.