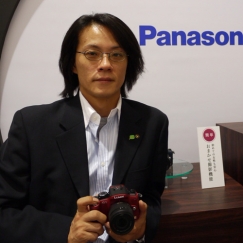 Panasonic did a fantastic job on the GH1’s hardware, and it’s software is an impeccable creation, with really easy to use functionality. Now Tester13’s software PTools allows us to change a limited set of variables in the GH1’s firmware. It doesn’t recode anything complicated, create any new functionality or restructure anything. It’s simply doing this:

To give you an idea of how easy it would have been for Panasonic to release the GH1 with a 50Mbit codec from the off, simply locate your cursor after the X, press backspace and type 50,000,000

The Panasonic GH1 is a consumer camera. A great camera. A bargain. Panasonic are a innovative and ethical company. But did they hobble the camera’s hardware with intent?

One theory is that most consumers just don’t need or want 50Mbit, and that for a rich businessman to shoot a few beaches, he doesn’t need 50Mbit quality either. But the ‘rich businessman’ theory begins to break down because market demand and Panasonic’s target audience says otherwise. So did Panasonic misjudge their customer’s demands?

I won’t say ‘underestimate’. Panasonic never underestimate their customers. But they could have made a misjudgement on their needs. And if so, Panasonic will need to understand why. Afterall, broadcast companies and journalists were a target for the GH1. This, from an interview with DPReview in 2009:

DPR: Presumably you’re using different compression, codecs and so on, so is there a difference in the video quality between the GH1 and your best camcorders?
Ichiro Kitao: In terms of resolution the camcorder is still better because they offer full 1080P (50i / 60i) codecs, and also the compression is a little bit different; a camcorder can manage compression wisely, with B pictures, which this one doesn’t have. Of course in the future it will get better.
DPR: So who is the target user for this camera, as distinct from high end camcorders – and also as distinct from the target market for the G1?
IK: High end camcorder users are one of the big targets. Also video journalists and maybe broadcasting companies.
DPR: In other words it’s very different to the target market for the G1?
IK: Yes. Of course the normal consumer wanting to shoot their children or whatever is one of our target customers, but as I said, operating the GH1 is a little more difficult than a camcorder.

With the release of the AF100 in December are Panasonic reacting to customer demand? Or is it part of a longterm product roadmap? Panasonic don’t make kneejerk reactions. They try to predict what the market will want. Technological products as advanced as DSLRs take years to develop, so they need a lot of forward planning. By the time they hit the market, the market may have changed. Therefore, an ability to predict market trends is essential and on the job description of every product planner, at every camera company.

Did Panasonic get that wrong? No! Because as I explained above, this isn’t a hardware limitation, it’s a flick that can be switched on and off. Panasonic could have flicked the switch a few months ago having reassessed demand but instead announced the AF100 at NAB.

So was the AVCHD 17Mbit GH1 a marketing lead strategical decision? That theory too, has an elephant in the room helping itself to the drinks cabinet. Camera companies are in a technological arms race precisely because of marketing. The megapixel race is a perfect example – higher specs sell! So why did Panasonic, knowing that higher numbers on a box sell products choose to release a 17Mbit camera which could actually do 50Mbit? That’s like going to all the expense of developing a 22 megapixel sensor, and having the firmware only use 12!

So let’s change tact and look at the disadvantages of 50Mbit MJPEG. It takes up more room on the card, especially in MJPEG format. It causes footage to stutter when played back on older computers. It’s not fully compatible with TVs and video specifications. You can’t whip the SDHC card out and put it in an El Cheapo set-top-media-player and expect the 50Mbit footage to play on it! So whilst this partly explains the lack of 50Mbit MJPEG it doesn’t explain the absence of 32Mbit AVCHD or even the universally common 24Mbit spec which is present on other consumer camcorders… by the same firm!

32Mbit AVCHD does not take up nearly as much storage space as MJPEG which is an old codec, and only slightly more than the 17Mbit flavour, and it plays back fine on Panasonic’s own SDHC equipped TVs.

DPR: What’s the thinking behind using AVCHD on a consumer camera and not a simpler MPEG file format?
IK: AVCHD is a very convenient format for use with televisions and blu-ray recorders. Our Viera models have the capability to play AVCHD directly, and we will expand those lines. We believe videos should be played back on a TV; it’s much nicer than looking at it on a PC screen. [EOSHD: I strongly agree] And of course you can convert to an MPEG file for sharing via PC. The cameras have a Motion JPEG option for customers who only want to use their movies on a PC. Windows 7 will be fully compatible with our AVCHD files, allowing them to be played without converting them first.

So our final stab at the conundrum is…

Why no 24Mbit AVCHD, without the ‘mud’? Tester13’s research says that mud is due to a bug so bad, it could almost be seen as a purposeful hack of the firmware. A planted bug to limit performance. That’s only his opinion though. I think highly of Panasonic, and their engineering teams, so although I don’t have an explanation for ‘mud’ on the original GH1, I would not like to delve further into conspiracy theories here. There has to be a logical reason. Battery consumption? Heat management? Maximum recording time?

In all truthfulness, all factors are taken into consideration. The original GH1 was a balanced product. Panasonic’s consumers wanted long maximum recording lengths. They wanted to save storage space so that they could archive their footage. They wanted to playback footage easily, even without a powerful editing suite or a latest spec Macbook. All these things are the considerations average consumers have to think about, that perhaps professionals or filmmakers, even most enthusiasts, just don’t.

I feel that is the real reason.

Why? Panasonic’s engineers and product planners said so themselves.

So whilst I don’t believe in conspiracies (I feel these are often an insult to one’s intelligence and an insult to the companies or people they concern) I still find one final-final thing slightly strange.

Why didn’t Panasonic at least put the option of higher bitrates in the menu, with a disclaimer that they shorten maximum clip lengths, are less compatible as universally accepted playback formats and use up more storage space? And why did Panasonic, when they realised the demand for a better codec in the GH1, and realised how much ground Canon were making up with their video DSLR niche – 5D Mark II’s selling out left right and centre – just not simply flick the switch and bring out firmware update 1.32 with some RED style poster graphic knocked up in Photoshop to appease the geeks?

Well – I think the final nail in the coffin of the ‘hobbled camera’ conspiracies comes from my experience of living in Asia and seeing how Asian photographers use DSLRs. In terms of indie filmmaking culture, Japan is an expert but quite conservative country. Panasonic are not RED. The USA division of Canon does much more to promote video on DSLRs than the main corporation and in Japan many photography professionals and enthusiasts are purist stills photographers on the whole. They don’t go around with Zacuto Z-Finders. The US is the one leading the way, with demands for stuff like 50Mbit MJPEG. I see it from Google Analytics too!

The 5D Mark II is not the most popular camera in Japan because it does HD video.

Possibly, we cinematography enthusiasts are even in a minority elsewhere. Though demand from regular customers is growing in line with our needs, most people in Asia have not yet heard of Zacuto and have not been inspired by Philip Bloom and have not even touched the HD video mode in their DSLRs even out of curiosity. Some have. They’re the exceptions, the mavericks.

For American companies (not so much us Brits sadly), who really understand the rapidly growing DSLR video niche market, Asia is a MASSIVE potentially untapped market to sell to. When I showed people the Zacuto Z-Finder here in Taiwan, it was all brand new – they’d never seen it, never shot video on a stills camera!

The Japanese corporations can learn from the filmmaking powerhouses of the world and improve their video cameras to fit into culture better and to help grow indie filmmaking communities accross the globe by simple switch flicks and menu options, without the need for expensive products like the AF100. And we can learn from them, produce more intelligent mainstream cinema and begin manufacturing our own stuff again instead of hiving it out to China all the time!

So please Panasonic… in the GH2… whilst you must balance the product for your overall market – just think of the tricks you might miss and the market niches you might trip over in the pursuit of the masses, and at no extra cost! Give us those high bit rate options before another Russian hacker does.

And for American companies like Zacuto or Hotrod Cameras. Go to the Asian market. The time is now right.