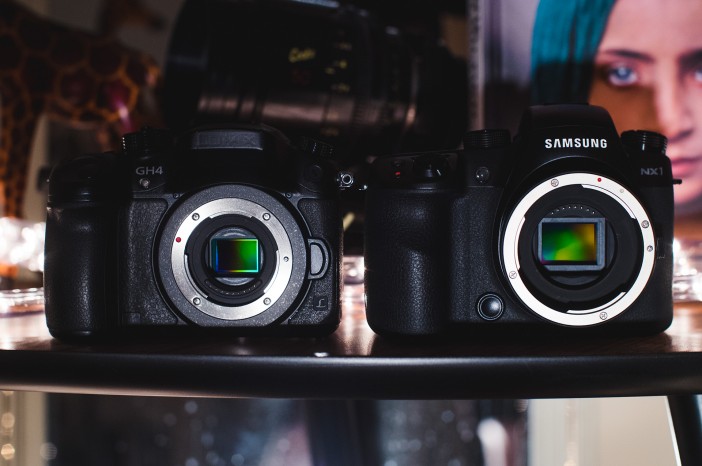 In only a few months, 57 new features have been added to the Samsung NX1. Meanwhile Panasonic have been more keen than many to evolve their products, adding a 4K Photo mode to the GH4 and 24p for 4:3 shooting, a nod to anamorphic filmmakers. But it isn’t enough. No anamorphic de-squeeze for instance and now the time it has taken for V-LOG to reach us has been too long.

Firmware is a new battleground and manufacturers must play the game better.

Why does manufacturer approach to firmware vary so much and why aren’t they more responsive to customer needs? Sony haven’t even given us an update to assign the video record button to a custom button, despite having updated the A6000 with X-AVC along with spectacular FS7 firmware updates recently adding ProRes. It’s very inconsistent.

I believe much of it comes down to reserving new features for new hardware. Firmware updates are usually free and if we never paid to upgrade our cameras, the manufacturers would be out of business.

However because we live in the era of software, customers have come to expect new features added to existing products by firmware – because they can!

A firmware update can be a trivial one-line of code or in the case of V-LOG something much more complicated that needs extensive testing. That is partly why V-LOG has taken such a long time to come to the GH4 but the fact is it should have been in there to start with and they have known about our requests for it ever since the GH4 prototypes were out there. I mentioned it to them myself on day zero.

Instead they are playing catch up with Sony a year later.

Canon meanwhile very rarely issue major firmware updates. They have done so with the 5D Mark II and III but only to add basic capabilities that should have been in there at launch – in the case of the 5D Mark II this was 24p. In the case of the Mark III it was uncompressed 1080p HDMI. The kind of updates Samsung have given us with the NX1 allude Canon and Nikon completely. The won’t give us peaking, meanwhile the NX1 got new gamma curves, timecode, luma level controls, master black level, faster AF and even an increased pixel output to improve the quality of internal 1080p.

Magic Lantern have given us far more than Canon have ever done and they don’t even have official company access to the code! Comical!

Personally, the evolution of firmware would swing my decision to purchase a camera for the positive… if in the specs was a commitment by the manufacturer to take on board user feedback and add improvements throughout the first year of the camera being launched, I’d be more likely to buy the camera. Simple as that.

On the other hand there’s a darker issue. Some cameras launch with incomplete, slow or buggy functionality and get a fix later. Firmware updates shouldn’t be an excuse for that. The first FS7 firmware felt rushed to the market and much of the subsequent updates were fixes for fundamental errors.

As for the GH4 and V-LOG, I’m sad to say I wasn’t invited to beta test it. I should have been and would have loved to have shared my excitement for it on the blog and you guys should have had this thing sooner. MUCH sooner. Sadly the horse has bolted and the A7R II with internal 4K and S-LOG 2 is set to steal the spotlight away from Panasonic in a big way.