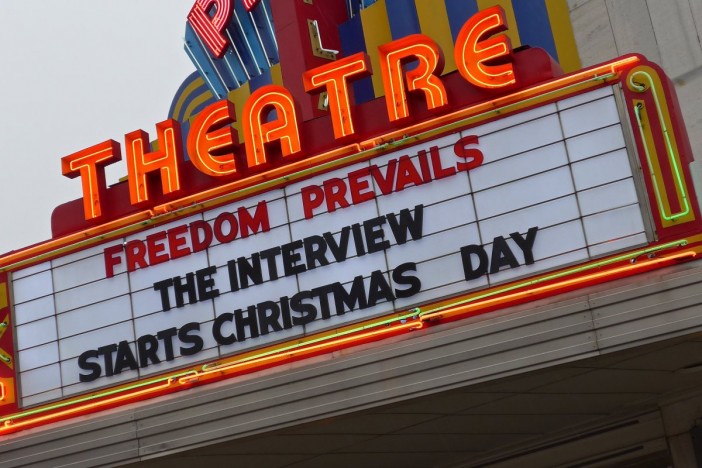 Viewed as still “experimental” by Sony Pictures boss Lynton, online streaming as a first release has nevertheless worked well. The Interview was expected to take around the same amount – $30m from one opening weekend nationwide in the US at 3500 theatres. It’s taken longer to reach that figure online and that’s with huge publicity. Online streaming was however limited only to the US. An online release can go global at the flick of a switch and the overheads are minuscule in comparison with a full blown cinema release.

It raises a question over the future of cinema – will online streaming fundamentally change it? Will theatres return to smaller scale independent picture houses with the emphasis on the experience of cinema going and will the mass market switch from the multiplex to the internet?

The Interview has since rolled out to 558 theatres in the US regardless. It would have been interesting to see what the online box office takings would have been if the film had actually been any good. So far it has been paid for 4.3 million in various guises online – rented, streamed or purchased.

On the Sony Pictures hack Lynton was left disappointed with the lack of assistance from within the studio community and the only help came from the FBI, who in the aftermath of the hack even went so far as to hold computer security seminars on the Sony lot for staff.

Saying managers had to pay wages by stamping checks and sending secure emails via old Blackberrys (talk about being thrust into the dark ages), Lynton said: “People relied on each other and it’s a good thing they relied on each other, because there wasn’t a lot of assistance coming out of the community, except for the FBI”

“There’s no playbook for this, so you are in essence trying to look at the situation as it unfolds and make decisions without being able to refer to a lot of experiences you’ve had in the past or other peoples’ experiences. You’re on completely new ground”

“This is what we’ve been waiting for” – Google

Proving that taste is no barrier to innovation at Google, Eric Schmidt was instrumental in pushing the online release of The Interview.

Sony decided to price the download at $5.99 rather than the usual $9.99 ‘in the name of free speech’ to avoid criticisms of price gauging given the circumstances. Seth Rogan, beacon for liberty and freedom of creative expression!? Apparently so.

The hack is still attributed by the FBI to IP addresses used exclusively in North Korea. Some experts have since cast doubts on that. However FBI director James Comey said his agency was sure North Korea was behind the attack because the hackers “got sloppy”.

“In nearly every case, they used proxy servers to disguise where they were coming from in sending these emails and posting these statements. But several times they got sloppy.

“Several times, either because they forgot or because of a technical problem, they connected directly and we could see that the IPs they were using… were exclusively used by the North Koreans.”

Cyber forensic work has now been completed at Sony Pictures and their network, starting with email, is expected to be back online within weeks.